In the ongoing effort to catch up with these pages, here’s the second installment in the Belize 2015 report.

I left off with the tough loss of a tailing permit on the end of day three, our last in Placencia. The following morning we took off to run down the Punta Gorda.

We fished around Placencia on our way down, but soon had zero shots and became focused on covering the ground to our destination. We arrived a little after 12, and had five hours to fish and get our bearings in some new water. We had a great afternoon looking, though very little finding to show for our efforts. We left for an inside spot, and had a few shots to keep our interest on the rise. Here especially, the large water made things tough. We found a pair of fish tailing against some mangroves, and I had a textbook grab from one of them. This time, I wasn’t going to miss the hook set: I strip set and tightened up on the line as the fish cleared to the reel. The fish made a dash for open water, and while the fish was clear there was an issue with where he had been: the line was snaked through a single mangrove, and Eworth pushed the boat toward it and I de-tangled the business. At this point we were clear to a fish that had been well-stuck, and I started to pull on the fish. Unbelievably, the line went slack after a few minutes. Once again, the hook had come out. I was bothered to no end, and immediately cut off the fly and tossed it as far as I could. To make matters worse, it didn’t go very far and felt very unsatisfying. The Worm was digging away in my brain, chewing up my confidence and force feeding it to my insecurities.

We caught a bonefish from a push, and Kat took this picture for the record:

We finished the day and headed home to the Garbutt’s lodge, enjoyed dinner, and set out the next morning in the clouds to try a shot at the tails anew.

In an effort to make the high water work for us, Eworth brought us to a back area that he had not fished in a few years. We snaked through a small channel that opened up to a large basin, where we set up with elevated hopes for the fish to push through. With Kat on the bow, we spotted a tail tip sliding through the slick and had her in position in short order. Her first cast didn’t make it, but her second did: with excellent form and impetuous style, Kat hooked her first permit of the trip. There was no losing this fish, and in a few minutes she held up her second permit ever and the first on this trip for the boat. This day was the only day we forgot the camera, so Eworth snapped a picture of the moment with his phone: 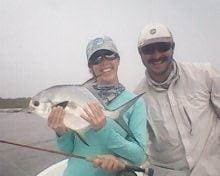 After this we broke for lunch, though Eworth asked us to leave a rod stripped out in the event that we saw another fish. Indeed we did, and I got the rod (new fly, recently proven fly and all) ready for the shot. The pair of fish took towards us, and I made a cast that got a grab immediately. I set the hook, lifted the rod, and the fly came flying back at me. At this point I had no choice but to laugh and try to maintain a positive attitude: harder said than done. I have never gone 0/3 on hooked permit before, and I was beginning to wonder what I should be doing differently. I stayed up for another hour until the water got too high and we left for another piece of similar water.

There, Eworth shut down the boat early and mentioned that he wanted us to look to the right, against a mangrove backdrop for the tails. I stripped out the line, and on my clearing cast put a large knot into the first stripping guide that I had to deal with. Keeping an eye on the shoreline he had pointed out, I finally undid the tangles and began stripping the line back in to the boat. I came tight to some sort of creature, and when I tried to jettison the animal without seeing it I realized it was big enough to clear the line to the reel. In this area I figured this was likely a bonefish or a jack crevalle, though felt like neither. Early on I realized it might be what had been eluding me, but the sheer impossibility of this kept me from believing it until I saw the sickle tail of a small permit. Sure enough, in the most unlikely of ways, I caught my first permit of the trip on a blind cast nowhere near we thought they might be. I was super pumped.

After that we continued on, and in short order I had an opportunity at true redemption. Two fish slid toward us down a shoreline, and I put a cast in front of them and let it drop. The second fish raced and tipped up, and I came tight to my second permit of the day. The fight was unremarkable, though at this point I was surprised that I didn’t lose the fish. We have no pictures of our third fish from the trip, as Eworth’s camera was full with family pictures far more important than another permit, but it capped an awesome day and left us feeling great for rising up against the tide and weather that had been plaguing us. We left the fifth day for another great dinner and some sleep before our final day of fishing.