The first of my catch-up reports (only some of them that include catching) starts with the Cuda Bowl. Once again, I was fishing with Captain John Benvenuto, and we were defending our victory last year. Here’s how it went down:

We started early in the morning. With 32 boats in the tournament, we had to try hard to find some fish that others wouldn’t. We looked and looked but had trouble finding a group of fish to make our upcoming days. Eventually, we found a large fish to throw at and had a bite from a near 40-incher that came easily. With that we bumped around for a few more hours, finding little, until we hit an area that John had been fishing. There we hooked two large fish, losing both to pulled hooks before we relocated. In another hour, we found a few more and caught another fish out of the group. In a prefish day, as always, any caught fish might be one not included in the score card. As bad an idea as it may have been, we were happy to have found some big fish that wanted to play our game and have some fish on the as-yet-non-counting board. We left for another spot on the way home but found nothing. Two fish in, a few more out there, and we were ready for the game.

We started early, and it was cold. We bundled up in fleeces and shells and set out. In only 8 hours from dock to dock, our fishing time was limited. Still and yet we opted for an early start, and when we arrived at our first stop we were hoping for more than we found. I got a bite from a giant on a blind cast over a white spot, and then John spotted a fish I didn’t that gave us another. Once again, the fly came out on a big fish, and we were excited for what was shaping up to be a day full of big fish.

Our fishing slowed, but nearby on some white sand John thankfully found a few fish cruising an edge. They were tough to see in the deeper water, but we were still able to get a few fish to charge the fly though none followed through. Finally, I had a large fish charge the fly from far away and track it to the boat, same as the others had done. This fish, however, decided to end his pursuit with some teeth, and with the leader in the rod tip ate the fly next to the boat. What happened next was unfortunate, but it happened anyway: the nail knot set into the tip of the rod. As I was passing the reel from under my arm to my right hand to clear the line the whole unit went flying into the water in front of us. I was left with a fast-decreasing stack of line on the deck: the only thing now connecting me to our fish as well as my rod and reel. These three things I wanted badly enough to take a flying cow-leap into the water, and I’m here to tell you it was chilly. Somehow I got a hoof on the cork, and as I organized the line and hardware I was still tight to the fish. Success, but not for long. The line continued to clear until the fish somehow broke the wire, so I piled my shivering self into the boat, humiliated and without a scoring animal. A rough addition to a thus far fishless day, though I felt better when John’s pole slipped on the bottom and he crashed in to the water as well. At this point, we had spent more time in the water than our target species had spent out of it, but we kept at it and moved toward new water with an increasingly tenuous optimism.

John soon had us in a group of small fish, and the first one we posted was 33 inches. We didn’t have a large one, but we did have one. Following that was five fish that cleared to the reel, but the hooks on our chosen fly were opening up with the slightest pressure. The burn of this was getting worse, and we lost fish after fish to the terrible construction. In an hour, we caught another smaller fish, this one 35 inches. Still, we knew all we needed was one more to at least fill out our scorecard. In this tournament, since you can only score three fish per day, a single doughnut can lead to all kinds of irreversible problems and we were nearly to the minimum requirement for not pulling our hair out. Soon, John spotted a group of three giant fish in a white spot. He poled in to the hammering wind and gave us an angle, and as soon as the fly landed a large fish took chase and we got a snout to lever open around our fly. This fish was not only long but quite heavy, and we fought him with kid gloves so as not to lose him to the toy hooks. In 10 minutes John slipped the hoop of our net around him, and took the following picture of the beast that scored at 44.5 inches. We estimated him to weigh near 24 pounds before we released him to swim again:

With that we had filled our scorecard, but now we needed to upgrade. Particularly that 31 incher needed a boost if we were going to have a crack at the win. We lost another few fish to the hook issue, and while we were frustrated beyond belief we kept at it. Finally, after nearly another 10 fish that had cleared to the reel and had opened up the hooks, we hooked a nice fish that made it to the boat. We replaced our 31 incher with a 37.25, and set out to get another upgrade before the clock ran out. Another few fish fell off, but then in the final minutes we hooked a nice one over white sand that stayed connected to the net. We only added two inches with the 37.5, but were happy with a near 40 inch average as we headed to the dock. We found that we were well in the lead in the fly division, leading the second place team by nearly 60 inches. As long as we were able to make it happen with three small fish the next day, we were confident in our second victory as a team.

We didn’t change our plan on the last day of fishing, but the fish had certainly found some smarts. Our fishing began with another couple lost bites, and we had to search hard for half of what he had the day before. We finally kept a small one connected, and put a 33 on our scorecard. Eventually (after another few lost bites and missed connections), we had a 35 next to the boat, and a nearby giant decided to attempt to remove the fly from our hooked fish’s mouth. As soon as we had the small fish in the net, we took the other rod out of the rack and I threw the fly at the giant, who was only willing to track the fly to the boat but refused to bite.

We pushed our way forward, missing bites and dropping fish that had cleared to the reel, deep in the frustration of being nearly there but miles away. As the tide shifted, we found ourselves in a new spot surrounded by large cudas. Unable to see them until they were upwind and therefore unable to get a shot off, we started to cover water. Every tenth cast would yield a bite from a large set of teeth, though these fish too refused to remain on the hook. In the final minutes we hooked a true giant that was likely over 50 inches, and held our breath as the fish swam slowly around the boat before it figured out fully what was going on. When the fish cleared the line it did so at light speed. As soon as the line cleared to the reel, we were left with the painful silent slack of the hook once again pulling out.

On the way to the dock with (yet again) a glaring hole in our scorecard, we did some light math. The second place team would have to catch three fish over 41.5 inches to beat us out–to everyone else our lead would be unbeatable. Our faith in our lead was dented when we found out that Ted Margo, despite not scoring any fish on the first day, put two fish over 45 inches on his scorecard. One of these won him the largest fly-caught fish not only for this tournament, but the largest ever fly caught fish in the event: a 47 inch monster that deserved every bit of the largest fish on fly award. Here’s the picture:

Despite our doubts, our lead was intact. John and I once again won the fly division grand champion award: 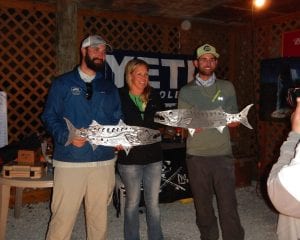 We’d like to make a very respectful nod to Jim Knowles and Captain Pete Heydon, who put up another great fight in this tournament and took runner-up honors. The spin division was won by Captain Pat Bracher and angler Steve Brown. Runner up in spin division was Matt Gravett with Captain Bobby Paulson. Special mention is also due to John Chinuntdet fishing with Captain Justin Rea, who caught three cudas on fly on the last day (in only three casts!) to take third place honors on fly. Rounding out the leaderboard was Rob Pennington fishing with Captain Bob Beighley who took third place spin division honors. Big fish on spin was Steve Brown with a 53 incher.

I’d like to thank Captain John Benvenuto, who put forth another great effort (mostly into the wind) for our second win in the Cuda Bowl. Next year, I’m sure we’ll be at it again.

And of course, a big thank you goes to Justin and Loren Rea, two great people who put on yet another awesome tournament.

My trip to the Everglades is up next, and I’ll upload that in the next few days.

more to come, Monday and Tuesday with John O’Hearn.