I know I’ve been delayed in these reports for a while, but with this report I’ll be current. The fishing had been spotty–at times great, but always hindered by some combination of wind, chill, and clouds. We remained right on the edge of things getting great, but at the moment things are working themselves out. The weather looked great the last two days, and while there is a lot of wind headed our way next week there should be a lot of sun and warmth to take the edge off.

Last Monday and Tuesday, I fished with John O’Hearn. Monday we were joined by Ian Slater, who came along for an extra set of hands if we got lucky enough to hook a big permit on 4lb. With solid cloud cover and low water temperatures, we made an early decision to catch some barracuda instead of grinding our way through what was sure to be less than great permit fishing. The first spot we went to gave us a shot at a pair of laid up fish, and we got a great close bite from a nice one. We didn’t measure the fish, but figured it close to 40 inches before we let it go. Ian was up next, and he had a few shots at batteries of fish that didn’t want to play our game. We moved on after an hour, to new places that might have both permit and barracuda to cast at.

I grabbed the cuda rod, though (of course) we saw instead a pair of mudding permit. We changed to the permit rod, though in 15 minutes we saw (again, of course) a large barracuda laying in a white sand hole. I switched back to the cuda rig, and with a little bit of positioning John had us in place to make a cast at the fish. I threw the fly, everything worked like it was supposed to, and we were treated to a textbook wolfbite. Here’s what the fish looked like, a fish over 40 inches according to our estimate: 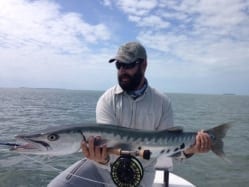 We continued on through our day, focused on the barracuda now instead of the permit. Ian and I traded shots on a white sand spot that was littered with teeth, and we each got a bite in the early afternoon. Ian’s came unbuttoned, and mine stayed on–a fish in the mid-30’s. We continued to get what we could out of the white spot until it dried up, and then John made the call to get our minds wrapped around the permit grind–good preparation, two weeks away from the March Merkin. We stuck with the plan for the final two hours of the day, and confirmed through this experience that the permit fishing was indeed tough. We saw a puff of mud that meant there had to be a permit nearby, though despite our efforts to find the fish we never could lock on. We made every effort we could to find a fish, but this day it was not to be.

The next day John and I opted to do a little exploring, something we both have been meaning to do for some time. We picked through a group of large and nearly impossible barracuda before finally making one grab the fly. John snapped a picture of our success in the one place we’d fished before: 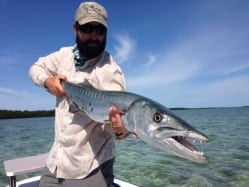 We stayed on these fish for a while before we made a move to parts to us as yet unknown, and proceeded to strip out both the barracuda and the permit rod as we looked for something to throw at. John found us a large number of barracuda, though these fish too were uninterested in our efforts. We found a large permit that let us get a cast off in its direction, even looking at the fly before skittering off into the abyss. We found a pair of large permit hanging out with a school of baby tarpon, and threw the permit fly at them without success. We found more and larger barracuda throughout the afternoon, and soon we had stowed the permit rod and focused on the barracuda fully. We had a spectacular grab from a large fish that tracked the fly all the way to the boat before crashing out of the water after our fly, though the hooks never found a place to call home.

As the light got low, we grabbed the permit rod again in hopes of a tailer. John pushed down two long banks in hopes that we might see a late day opportunity, but this was not meant to be and we headed home when it was time.

I’d like to thank John for a day of exploration, and I’m looking forward to fishing with him on Tuesday–the last day we have before the March Merkin. There hasn’t been much of a chance to get into permit shape before the tournament, so we’ll have to keep our working caps on and hope for the best.

I’ll do a better job of keeping these reports current as the fishing happens.