After the Golden Fly, I spent a few days recuperating before heading back out to keep sharp for the Gold Cup. Ian and I had a late afternoon/evening scout session, which was made difficult by the low water and wind. We fished the ocean for a while before heading to a backcountry basin in search of some laid up tarpon. We found a few fish in the evening here, though none were converted into something to pull on. After the light got low and we realized the tarpon fishing was less than titillating we made a move to find a permit. We took a long run to a grass bank that Ian thought might have a permit on it, shutting down well outside of the depth we wanted to fish so as not to spook any fish just pushing up onto the flat. Within a minute or so I saw a single fish spook off the boat, and as I watched it race off the bank I saw a nervous tremble from what was surely a school of more. I tried to get the fly to the group, though they were already headed our way and nervous before I started casting. These fish bumped water as they also left, and when we spooked another fish from our long evening shadows I left the boat and tried to make a wading approach in the gloaming.

The fish were there in fantastic numbers, but the water was too deep in the area they wanted to be for them to tail. I walked toward a wind slick, hoping to get a shallow fish in range, and in the process blew out another few permit that I didn’t see until it was too late. Once, I saw what I thought was a tail and I stopped, hoping the fish (if it was even a fish) would make another mistake and give me a shot. I stood still for nearly a minute, ready to throw at the slightest surface tick, but soon decided that it was best to keep moving into shallow water and took a step in that direction. As soon as I did this the fish skittered away from me–my plan to wait for a fish to show itself been foiled by the depth of the water once again.

I continued to bumble around in water that was too deep to see fish in until Ian picked me up about 45 minutes later, and in a few minutes we spotted another pair of fish and I got out again to take a walk in their direction. This pair of fish was moving away from me the whole time, and each time I walked faster to get in front of them I saw them pull further ahead of my efforts. Eventually I was tired and still no closer to the fish, and got back into the skiff for the remainder of the evening. We had a couple shots at fish that pricked up in the chop, but never hooked one. As hard as the fishing was, it was great fun and a day that I’m left thinking about even a week afterwards. I’d like to thank Ian (who is currently devoting all of his time to the “remember Kimbo” movement (#neverforgetkimbo #kimboslice4ever)) for a great afternoon on the water.

Following the day with Ian I had a few more days off before fishing with Simon Becker and Kat. With the front coming our way (it’s here now, having arrived in all its glory on Monday), we decided to get out and make what we could out of the tough conditions.

Kat and I traded shots from spot to spot, and for the windy overcast conditions we actually had pretty good fishing. Kat jumped a tarpon, and I had a shot at a school of small permit before lunch. We never had any great numbers of fish in any one place, but every hour or so we seemed to have something good happen near enough to the boat that we could do something about it. I had a single permit on a white sand edge fall in heavily behind the fly, though we lost sight of the animal when it got onto the dark grass bank. Simon and I both thought the fish had eaten the fly, though we never came tight and we saw no evidence that it had except for a hard shudder as I stripped the fly.

At our last spot, Simon told me to rig a rod for either permit or tarpon, which two weeks before the Gold Cup means a heavy shock that would land a tarpon if we hooked one. I put a large merkin on one of my tarpon leaders, and we headed through the basin in search of something to throw at. We saw a permit that I couldn’t get the fly to before it spooked off the boat, and then Simon saw some nervous water on the flat and put us up current of the disturbance. We waited for nearly a minute before Simon told me that he saw the push again about 60 feet away, and I lobbed the fly in front of the bulge and stripped. I saw the fish rush the merkin and shake its head when it ate, and I set the hook and the large permit took off across the flat in search of deep water. With a tarpon leader of 16# Mason we made short work of the fish, a very big one of at least 25 pounds–likely more before the spawn. Here’s the picture: 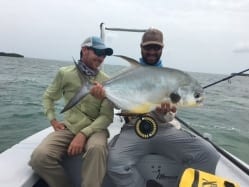 After we landed and photographed the fish, Kat stayed up for the remainder of the day. We had a couple close shots at permit that didn’t work out, and a few rolling tarpon that we couldn’t figure out. Kat made a few casts that really looked as though they would work but no animals volunteered, and we headed home about an hour after the permit made our day.

I’m fishing with John O’Hearn tomorrow and the next, and Dave Dalu will join us on Friday. That’s it for me until I start prefishing up to the Gold Cup, which starts week after next. Reports will follow as usual.