At the beginning of last week, I fished with Ian Slater on Monday and John O’Hearn as Ted Margo’s guest on Tuesday.

With Ian on Monday we only fished a half day in the morning, looking for permit. At our first stop of the morning Ian found a few tails nearby a flat, suspended in the just beginning current. We approached them as shyly as we could, and on our third cast were able to get the fly in a place where I felt we had a chance at coming tight. I made a long strip and felt the fly stop, and as the line cleared to the reel was convinced that a permit was on the other end. After the adrenaline (but not any more fly line) wore off, however, I was sure this was not what we’d hoped for. Instead of a permit a 5 pound mutton snapper was attached to the hook, and I made an effort to keep the scarlet thing in the water to stay quiet as I released it. We never saw the permit again, though we hung around for a while in hopes of getting lucky.

Our second stop yielded some very interesting fishing. The permit were interacting with a channel, a flat, and a few high spots and depressions mixed in. I waded after a school of tailing fish, and had a member of a pair tear after the fly but lose it in the current. I stood watch after spooking the group, and was down current when two larger fish hopped out of the channel and tailed hard on the flat above me. I got a cast in front of the rear fish and watched the water bulge, a black tail extending from behind it and wagging with the moving water in my direction. I now had a ton of slack from the fly getting washed towards me, and figured that the fish had taken part, but was out of options to come tight besides lifting the rod tip to take up slack. I so lifted, despite my desire for a better option, and came tight to the fish immediately. The fish cleared the line immediately as it went into the channel and ran with the current, and I cinched up on it as it hit the reel to bury the hook. Just as I figured I was home free the fish dropped the hook and I was left with nothing but, as is often administered when a trout set and a permit interact, a healthy dose of sadness.

We hung around in the area for a while, seeing but never getting a great shot at a waking school of smaller fish. After a while we decided to change our angle and Ian got the boat into position for an upcurrent shot. I made a cast at them that could have worked, but by this point the fish were responding negatively to our continued efforts and ducked the fly before speeding off. After deciding this school was no longer worth committing our time to, we moved on to a nearby area and looked for some fresh meat. We found a few knifing tails in the calm, but the fish never showed themselves until it was too late.

Our morning expired nearby on a different piece of bottom, with another group of fish the didn’t give us a shot despite our best attempts to get in front of them. We left in the early afternoon, with a nearly and a could-have-been on the board.

The next day I was invited by Ted Margo to fish as his guest with John O’Hearn. It’s been a while since I’ve had the pleasure of fishing with Ted, and I was excited to spend a day on the water with two of my favorite people. I brought some 2 pound, and John and I decided that that was all we were going to throw at permit this day.

The day started out in the slick calm of an approaching thunderstorm, and we had some good fishing in the first few hours. I waded after a few groups of permit that stayed perpetually outside of my range, and what was a few hours of interesting and engaging potential leaves me without much to write except that it was hard and didn’t ever come together. Ted took a few shots at a group of smaller tarpon that were nearby, and when the first cold fingers of the storm started curling around us we headed to the dock. I had forgotten my rain gear, so John let me borrow a spare pair of his as we waited at the dock with Drew and Brad Bowman for the rain to let up. We spent an hour busting one another’s balls and trying to catch grey snapper with some fried chicken before the rain eased up enough for us to get back on the water. We began what felt like the second separate day in the late morning, defined by wet and wind. Our rain jackets did what they could for the first hour, but throughout the constant assault they soon got lazy. We went through the motions, taking a hard look in the rain for something to throw at, finding nothing before staking off in the drizzle for a casting competition in the drop-throwing wind.

When the rain quit so did the wind, and we were left with a post-storm quiet that felt like a different day from the afternoon. Drew and Brad were on the other side of a flat we were hoping to fish, but a quick text message from John (not to mention some serious generosity from Drew) allowed us to make a pass on the far end. Ted left the boat to wade after a school of bonefish, and when John spotted a more substantial wake in the deeper water I grabbed the 2-pound rig and walked after it. I lost sight of the bigger wakes, and waited around for something to happen. Ted was occupied with a school of bonefish, and I just walked away from the boat to find what I could. I soon saw another wake approaching, and made a cast in front of it. I came tight early, and realized it was a bonefish when the rest of the school spooked off from the commotion. I tried to baby the fish to preserve the tippet, but on along run the bonefish broke the 2 pound and I headed back to the boat to grab a different rod.

I grabbed a 9 rigged with 16, and left Ted and John once again to find something to play with. A single fish waked around in the deeper water, and I got into position to make a cast at the looping crease of water. When the wake came at me I put the fly out in front of it, and stripped to get some attention. I saw the wake stop and disappear, and soon came tight on another long strip. I wasn’t sure at first what this fish was, and due to the missed prediction the day before with Ian was a little worried about getting too confident early on. The fish tore off into backing, and after a few runs I’d confirmed it to be what I wanted. I grabbed the fish for some pictures, and let it go to try for another: 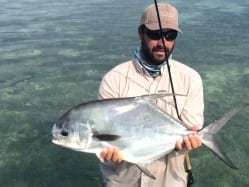 A second fish didn’t happen, and in a short time the day was done.

I’d like to thank Ted Margo for the invitation, and John O’Hearn for the great effort in conditions that kept most people at the dock.

As far as current conditions are concerned, there are still a fair amount of permit around but they’re hard to get. Regarding Hurricane Matthew, it looks as though the storm is going to pass well east of us. We’ll have some weather I’m sure, but nothing like the Bahamas and Cuba are going to get. I leave in a few hours to drive to Everglades City, in pursuit of the 6 with Steve and Chad.