Last week I had a pair of days scheduled, one with Nick Labadie and one with Scott Collins. After that I fished with Ian Slater and John O’Hearn. The weather has been cold, colder than we anticipated when we booked the days in the fall, and on each of the first two we decided to permit fish instead of banging our heads against the cold-water-wall while tarpon fishing.
The day with Nick started out the week, and while the water was cool we had a shot at a pair of smaller permit in the morning. I threw at the lead fish to start, and it got behind the fly and attempted to eat it. I’m unsure if its inability to get the thing inside was the fault of us or it, but the fish that was engaged spooked off the boat and took its friend with it. I threw at them as they slowed down, and while I hate to admit that I hooked a permit without any indication that it was happening that’s exactly what happened. Nick and I both laughed at how ridiculous it was to hook a permit in this way, without any premeditation, though despite the fact we thought it strange we were also very happy to take part in a rare event where a permit gives you something you didn’t deserve. As a painful reminder of how rare things happening this way is, the hook pulled when the fish was next to the boat, just to complete the bizarre cycle of permit fishing ups and downs in a tragicomic way. We kept on, discussing what we would do different were we to hook another one, and in short order had our chance. A pair of tailing fish gave us a chance to cast, and after bailing out of the first cast due to a tangle in my running line we were able to get another cast in front of the duo and one jumped on the yarn wagon for some fun. This fish gave us a chance to flex our now over-developed tactics of fighting a permit, still my least favorite thing to do in fly fishing, and we grabbed it for a trophy shot before setting towards what we hoped might be another: 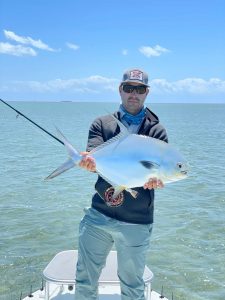 The fishing remained slow, and while Nick had us on two more opportunities before the day got done we couldn’t turn either in to a chance at fish number two.

Wednesday I fished with Scott Collins, with whom I’m trying to fish more this year. We also elected to permit fish, since the tarpon fishing seemed to be slow, and our fishing was actually reasonably good. Despite the fishing we had, the most important part of the day was spending it with Scott, who was on the other side of the transaction in the March Merkin in 2014 that pushed John and I out of first place. Scott is someone who to me is worth looking up to, not just for what he does but how he acts. His history as a tournament guide includes some incredible statistics: six wins in permit tournaments, victories in each of the tarpon tournaments multiple times (with three different anglers), not to mention his tenure with Dave Dalu, during which they double-handedly redefined what was possible on the ocean. If there is someone who has defined what guiding at a high level is, it’s Scott. While my relationship with him was forged under the most painful of competitive circumstances, it’s been since that time that I’ve grown to be good friends with the guy. Our fishing on Wednesday was not the first time we fished together since that time, though with my decision to take off the permit tournaments next year (not to mention the fact that we were actively permit fishing) pushed the topic of our tournament history closer to the surface.
We discussed permit fishing in general, tournament statistics, and approach. For me, it was one of those days that had little to do with fishing. Instead, it had to do with the company, though in this company there was of course fishing to be done and we did lots of it.

I lost one to slack on a chasing shot, never coming tight to it. At the end of the day we found some superb opportunities, and I had another fish tail spectacularly on the fly after a long chase towards me. This could have been a stellar cap on a perfect day, showing Scott what I was made of, a final completion of what all we’d talked about. Instead, the fish ran off 30 feet before coming unbuttoned, sprinkling a measure of sadness atop the attempted perfection, reminding me that in fly fishing failure is as much a part of things as success.

I’m fishing with Scott again this week, and we will likely tarpon fish, but I hope we get a chance to permit fish more in the future together.

After the day with Scott I fished with Ian for a day, and our target was tarpon. The tarpon fishing remained difficult, and we gave it a day’s effort without finding any that wanted to play. We did, however, give it our all and I can tell you once the fish decide to start taking part in our game we are well prepared to wreak havoc as best we can.

After the day with Ian I was up for a day with John O’Hearn, and we chose to permit fish as well. We were throwing 4# tippet, having knocked out the 2 a few years ago, and our planned approach is one that in record fishing for me has paid off: just keep running the plays. We found some incredible fishing, though every one of the fish was small, and between the wind and the fast-moving fish we decided to holster the light stuff and throw a regular outfit for some fun. Two shots later we were tight to a small one, landing it without issue and taking pictures. We hooked another one not long after, and near the end game the fly fell out and the fish was lost. Once again, sadness prevailed. We continued on, switching back to the 4-pound rod once we went somewhere not crawling with smaller fish, and had a few shots before the day timed and out we headed home. Here’s what the one we caught looked like: 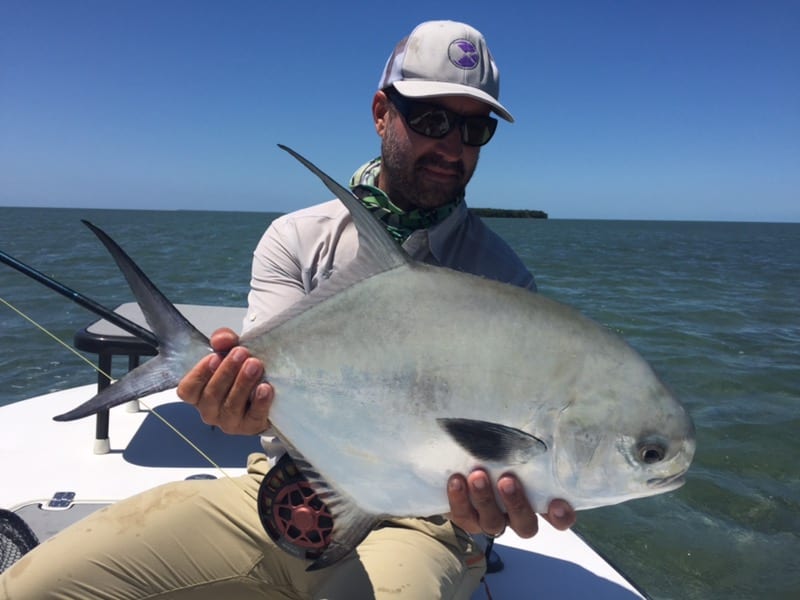 This week I’m scheduled to fish with John O’Hearn tomorrow and then Scott Collins on Wednesday, followed by two days with Ian Slater on Friday and Saturday. Tarpon, beware.

More to come as always,