After the facepunch that was detailed in the last report I had an opportunity to spend a few days fishing with a number of different guides and friends/family. Last Tuesday I fished with my mother, Vicky, and Aaron Snell. Wednesday last I fished with Howard Davis on our annual day together with Ian Slater, and a day with John O’hearn and John Kelleher rounded out the week of musical skiffs.

With Aaron and Vicky, our fishing started out slowly. We had an early look for a tarpon, and found them in short supply. Their patience was equivalently curtailed, and after two hours of re-positioning and asking politely we decided to move on. Aaron took us in search of a late morning bonefish, and we again were met with a lack of volunteers. We kept moving in the late morning, beginning a search for a permit as we made some sandwiches. I had a shot at a single fish that appeared quickly, and it looked at the fly briefly before it saw the boat and spooked. Aaron changed our zipcode after we ate, looking for some permit to occupy the afternoon.

As soon as we began to push in the area he selected it was apparent that we were among a great many. Vicky had a shot at a pair and then a single, though the wind picked up and forced some casts to arrive in places unintended. I was up next, and had a few shots at fish as we poled away from the afternoon sun and into the  growing breeze. A few of these were noteworthy for appearing to engage a permit in just the way we’d intended to, though the fact that none led to a connection was frustrating. Twice we had casts in front of fish that appeared interested, and twice they avoided making a mistake. We kept on in the chop, switching flies reflexively and vowing to stick with it despite the growing feeling that we should have caught one of these damn things by now.

Aaron and I spotted a permit that was, if I’m being honest, one of the largest I’ve ever seen. All I could tell was that it was enormous, and despite this usually debilitating piece of information was able to get the fly in a perfect spot–just up current of what appeared to be a pale bathtub smashing its face into the grass . The giant fish veered towards and hovered over the fly, twitching on it and tracking it through a slow strip before pausing a second time with another quiver. Aaron said “no way” as the fish stopped this second time, expecting (as I did) that we were surely attached. I stripped again to set the hook, and this time the giant permit noticed what was going on and spun around in a betrayed circle, eyeing the fly hard again before taking off. I’m pretty sure I saw it mutter “how could you?” in the direction of the fly on the way out.

As is so often the case in permit fishing, redemption came not from the next shot that again landed right. This fish looked again as if it had eaten but didn’t, again leaving us annoyed, though a fish that Aaron spotted close to the boat that I didn’t see gave up a bite (finally) on a flop cast and we were off to fight it. Vicky snapped some pictures of the fish before getting up herself: 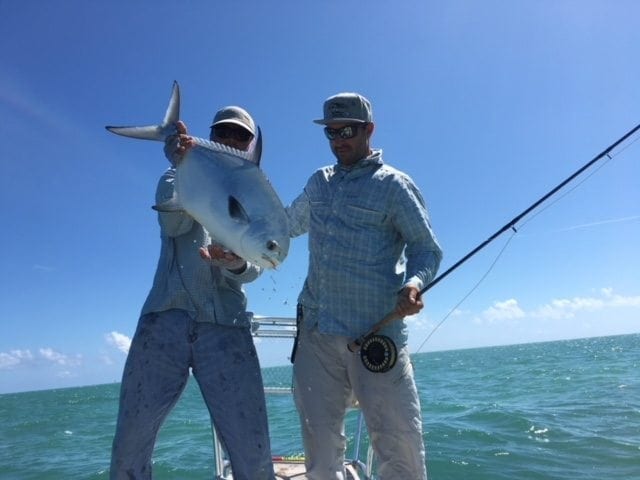 We kept at it for the next half hour before we had to leave, though we couldn’t get another permit to comply.

The following day I fished with Howard Davis and Ian Slater, as the former’s guest. Howard and I enjoy an annual day on the water together, and it’s something I look forward to a great deal. Our fishing is usually difficult, for whatever reason, and this day was not an exception to that. We had a few visits to places in the beginning of the day that didn’t give up any shots, and in the late morning found a few that were suffering from a familiar case of the I-don’t-think-so’s. I did manage to convince one of these to cozy up to Skok’s feathered invention, however, and luckily it remained attached for the time it took to get the beast under control and photographed. Ian did the grabbing, and Howard marked the moment: 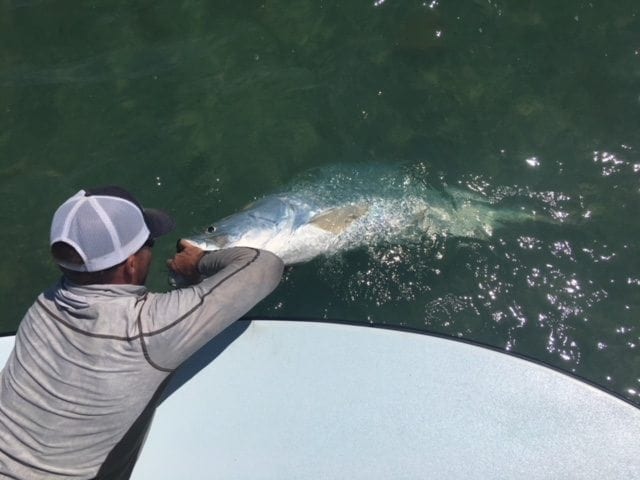 After this Howard had a few shots, and one of them caused a spectacular bite from a large single that ate the fly too aggressively. Howard stripped to get hooked up, but the fly had been pushed out of the way by the fish and never made it inside. We kept on through the morning and in to the afternoon, when the fishing slowed further. Howard stayed up for most of the day, trying to even the score, but the fish didn’t cooperate. We ended our day after a long afternoon try with only the two morning bites to show for our efforts.

The following day I fished with John O’Hearn and John Kelleher, and our fishing was beyond challenging. We found a large number of shots in a place of known difficulty, and neither of us could coax an error. We fished hard all day, finding a few shots here and there but nothing that we could convert into a hooked tarpon. Despite the hard conditions it was a great pleasure to spend a day on the water with the two Johns, and I hope we can repeat the effort (perhaps with different results) in the future.

As always I’d like to thank those that invited me along for the above days–it’s a great pleasure to get out there on the water with good friends and great anglers.

Up next is a pair of days, one with Ian Slater in pursuit of tarpon and another with Simon Becker and Joe Skrumbellos.