After the time spent in pursuit of a permit on two pound (before the trip that finally caught it), I had a pair of days booked with Ian Slater. We were interested primarily in catching permit, and I brought along a few guests for the two days. The first was my wife, Kat, with whom I enjoy fishing immensely but don’t get to as often as I’d like. The second was Josef Borski, the older of Tim’s boys, who has become quite the fisherman in the last few years and who I was hoping might get his first permit on fly with us.

The day with Kat was the first, and Ian got us out for an early start and we all planned on a late day. We didn’t find much at our first stop, and after having a few shots as the sun got up Ian relocated us for a look at some new ground. I was up and listened as Ian explained how he’d been finding the fish at this particular place: a school of smaller fish that had been hanging around, doing weird permit stuff. We saw the school that he described on our first pass, though they were too close when we spotted them for us to do anything about. After we watched them swim away Ian looped back around to the point they’d been hanging around, hoping they might reload. We kept a hard eye for the tiny things, expecting them to show up close in the glare again, and when I spotted a puff of mud nearby we threw one into the mix. I didn’t come tight on the first cast, but we saw another puff of mud and this time when I threw up current of it I was tight. The fish swam fast in to some deep water, and we followed after it. I assumed the fish was a member of the pack we’d seen, which meant it would have been very small, but when we got a look at it it was a much larger animal. Ian grabbed the beast when it came by the boat a second time and we held it up for pictures. It weighed 18 pounds on a certified scale: 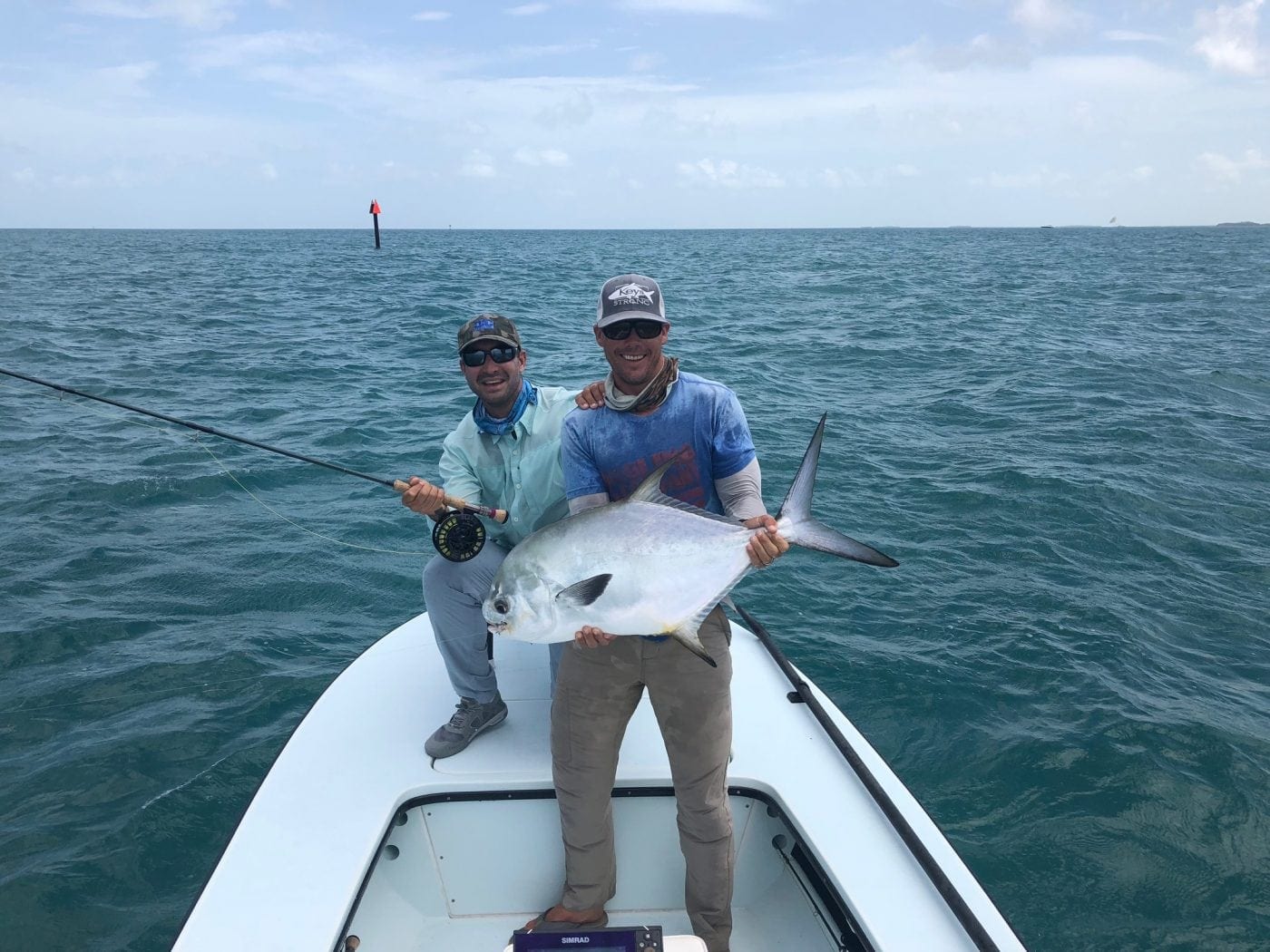 After this fish we kept on, looking for another. The afternoon fishing was slow; we had a few shots but nothing noteworthy until the last stop of the day when Ian deftly put us in position for some tailing fish. I hopped out and missed a few shots before coming tight to a small permit that I thought was a bonefish when I hooked it: 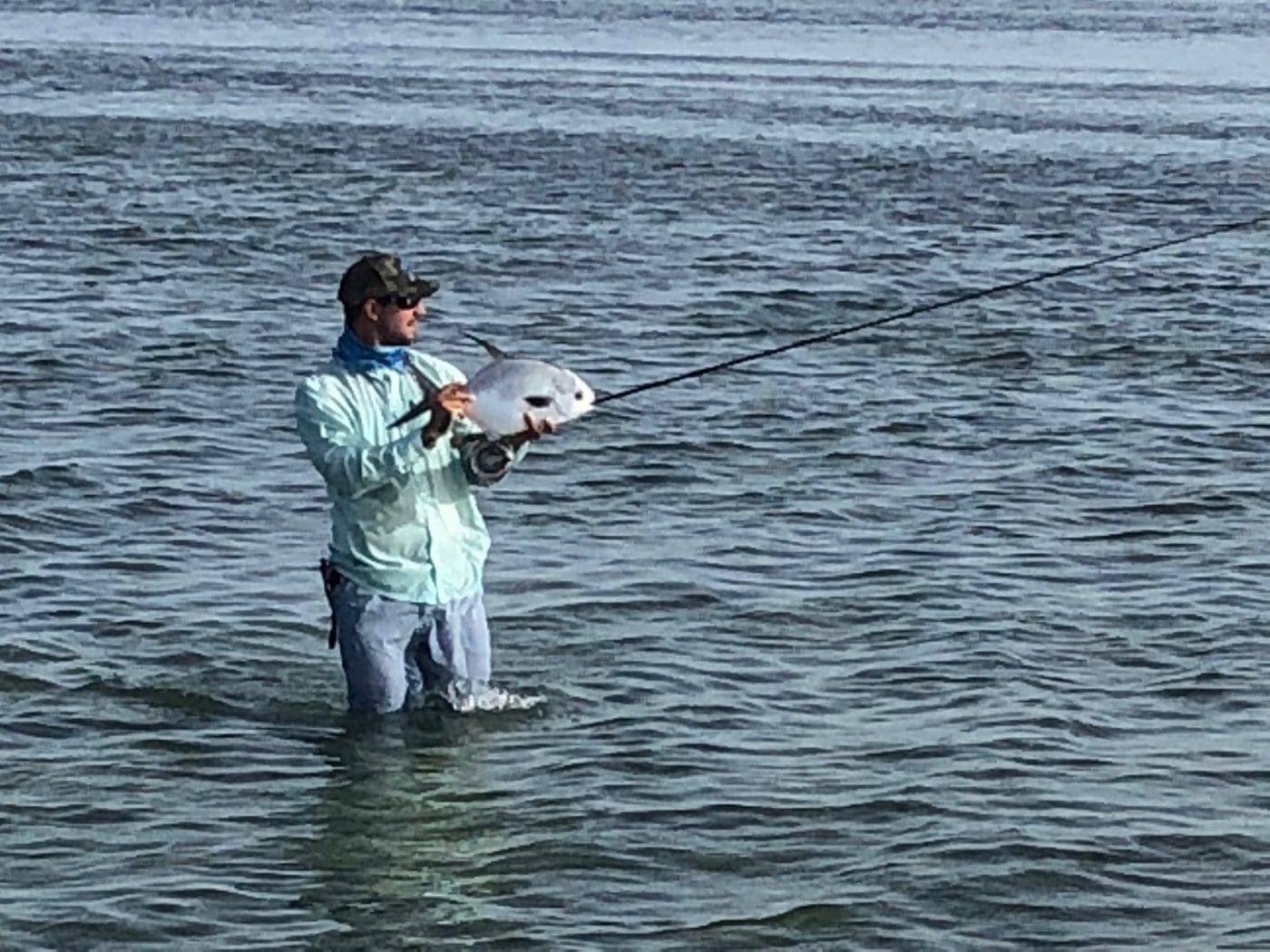 Kat then got out of the boat, and I walked with her towards a small group of small fish. She put the cast in the mix on her second shot, coming tight on a fast strip to our third permit of the day. This fish didn’t make it to hand, sadly, as the line jumped up and wrapped around Kat’s finger before it could clear and broke off.

We kept fishing, looking for more fish, though the action slowed and we headed in after only a few more shots.

The next day I fished with Josef Borski, son of the legendary Tim Borski. We’ve been involved with Tim since I opened the shop in 2009, and over the years we’ve put paintings of his on all kinds of things in the shop. Josef was a young boy when we opened, but over time he’s grown up a lot and lately I’ve been hearing great things about him and his fishing. He was leaving for college at the end of August, and I invited him out with Ian and me for a day to see if we could be a part of his first permit on fly.

The second day of fishing we stuck with the plan from the day before, and early on it was apparent that we had a sharpie on our hands. Josef is a great guy as well as a fantastic fisherman, and I was convinced after watching him on the bow that it wasn’t going to be hard for his first permit to happen this day.

In the morning Josef had a fantastic shot at a school of permit that looked very similar to the ones we’d seen the day before with Kat, and the result was slightly baffling: the permit, swerving hard behind the fly and making every move as if they’d eaten, apparently refused to get attached. We looped around the tried to find them a second time, though after this first shot we were unable to come across them again. Joseph and I traded shots throughout the day, not finding much and waiting for the afternoon fish that Ian had patterned. We got near where Ian wanted to be and waited, hoping for some fish to tail as they had the day prior. We passed the time looking at stuff on the bottom and discussing strategies for box fish on fly (which Josef told us were much easier where he was from).

When we first spotted a pushing wake of a pair of fish Josef and I got out of the boat together. We walked toward where the fish were going to be and got ready for a cast out in front of them. In the shallow water I thought these might be bonefish, though when Josef’s fly landed we immediately confirmed that these were permit and that at least one of them was in the mood to play. As soon as the fly landed a small permit plunged towards it, sticking its tail out of the water as it ate. Josef set the hook and I watched as what I suspected was going to happen started to play out perfectly. The fish skittered away, and Josef stripped to stay tight as it circled back toward him. Suddenly he was slack. The fish gone, he wound in so that we could assess what went wrong.

The class was frayed, chewed through by some obstruction, and I put another piece of tippet on and a new fly. A few small schools of fish came through, though none of them presented a great opportunity, and soon Ian arrived with another rod. Ian and Josef stood in front of me, cutting off any fish that might come out of the nearby channel, and I dropped behind them to stay out of the way and try to make a living throwing at their cast-ats. I threw at a few disturbed fish that had passed through the gauntlet and caught a small bonefish, though what we were hoping for to happen never did work out–Josef had a few more shots at a permit, but on this day his first was not to happen.

I do want to point out again what a pleasure it was to fish with Josef, and I’m quite sure that he’s going to make it in to the rotation on these pages. When (and if) he starts guiding, I’ll be the first in line to get some days. Until then, he’s welcome on any boat that I’m on.

I just got back from a trip with Steve and Chad, where we experienced the pain of failure with which we’re becoming familiar, and I’m in the process of catching up on these pages so the report will have to wait at least a few more days. I’m heading back up there on the 24 of this month, so I may wrap both of those reports up together when I get back.