Last week I returned to the Everglades to spend three days with a pretty amazing group of people. The last trip I had made there was in late February of last year, when those who are familiar with these reports will remember we finally caught the six pound record we had been after for nearly a decade. Catching that fish with Steve and Chad was an exceptional experience for me, though I know that many people had more to do with that record than a piece of paper with my name on it would imply. Steve and Chad worked tirelessly to make it happen; without them I would probably still be stuck on an oyster bay less than a mile from Chokoloskee. Kat remained supportive over the years I returned with a sleep deficit and a hole in my ego to repair. Jason Schratweiser held the spotlight and the gaff for many years, entering into more than a few hours-long events that often put him in harm’s way. And save for one time David Nelson manned the terminal end in 2012, Dave Skok has been fitting countless special hooks with specific colors and materials in time for each trip we made. Without each of these people the record would never have happened, and the best thing I could imagine was to get this group together, go to the Everglades, and have fun fishing. I booked Steve and Chad as guides and invited the rest, and on Monday morning we set out in yet another cold front (of course) to do nothing but smoke cigars and have fun fly fishing: 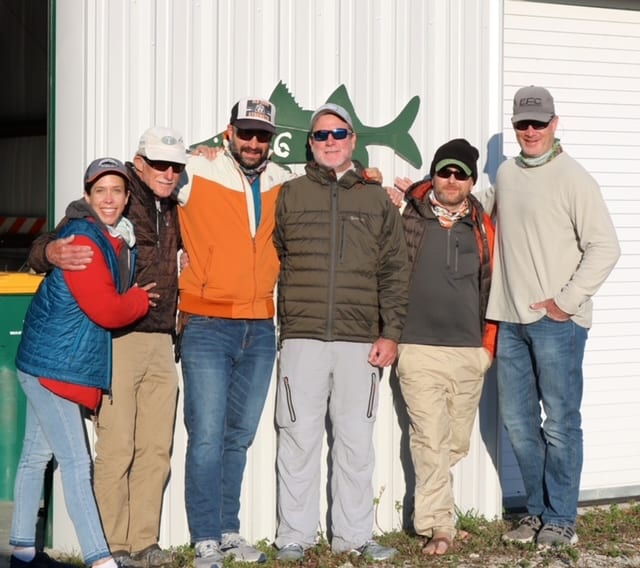 The first day was the warmest of the three we had scheduled, and in the slightly warmer weather we found a fair number of fish to throw at. Jason and I went with Chad, leaving Kat and Dave with Steve, and we moved around from place to place in search of things to throw at. I had hopes of a slot redfish for dinner, though this was not to be. I landed a decent snook of 4-5 pounds near the end of the day, and did my best to take in a place I’ve associated with arduous obsession with a new outlook. Kat and Dave found some larger fish with Steve and Kat, landing his personal best snook on the first day of fishing: a 32-incher. After fishing we returned to Steve’s house for steaks and more guff, enjoying ourselves immensely.

The second day I was with Chad and Dave, and it was colder. Despite the fact we were no longer in possession of murderous intentions the weather, at least on this trip, worked against us anyway. We bumped around for most of the morning in search of a redfish or snook, and while we had our opportunities at both by the afternoon we only had a few smaller snook to claim for a fair number of shots at both. We toured the place that Chad has since nicknamed The 187, where we had caught the record, and poled over a place as close as we could remember to the precise spot we’d connected to it. We bumped along in search of snook, seeing a few but always foiled by their poor attitude. We switched flies, hoping to change our luck. Chad made a move in the late afternoon, hoping to scratch something worthwhile from the day, though in the middle of our run a pelican making a beeline for my face seemed not to predict any improvement in our luck. Chad got us near a shoreline in some shallow mud, surrounded by dry roots, hoping to pull a line-sided rabbit from a hat. In the middle of a discussion of yet another fly change to invite a volunteer Chad spotted a surface fold from a snook of unknown proportions. Dave threw in the direction of the ridge, though after a pair of casts the fish stopped moving. Dave threw again at nothing in particular, and a quick flush connected him with to the snook we’d been hunting. The fish fought hard but close by, taking its face on a muddy tour of the bay bottom. With no shoreline roots to run towards the snook fought near and tough, though after a few tense moments the fish couldn’t keep up with Dave’s muscle and Chad grabbed the animal.
In the boat we were surprised by how big the fish was, and we took an extra beat to weigh and measure the fish before we let it go. 16 pounds even and 36 inches, this fish once again gave Dave Skok his personal best snook on the trip. Here’s what it looked like on the pro-cam: 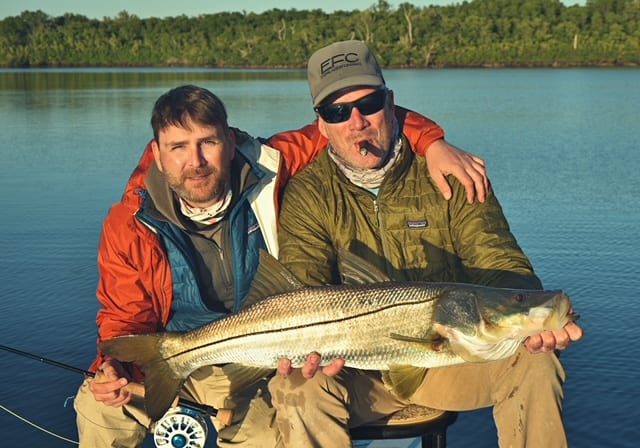 After this we kept on for the remaining daylight, hoping for another giant but sated by the one we had, and when the light got low we got going.

The last day of fishing I took my wife with Steve, leaving Chad in charge of the boys on the other boat, and we had a blast. We fished far and wide, probing shorelines and mud flats for fish we could play with, though at this point the water temperature had fallen nearer to the level of air chill and the fish showed their dissatisfaction by either disappearing or ignoring the feathers we threw. We smoked cigars, talked about what you talk about on a skiff, and had a ball. For me, it was a meaningful to share some time with Steve with Kat, two of my favorite people who had yet to fish together in Florida. We kept our focus up in the winter chill, catching a few smaller snook and puppy drum but ever searching for a big payoff. The shots we had at snook we could see were met with disinterest by the target, though we had a ball keeping the hunt up for a payoff. We fished, as usual, until dark. I took a picture of our shadows against the shoreline in the low light, which I thought was a pretty way to sum up our time up there: 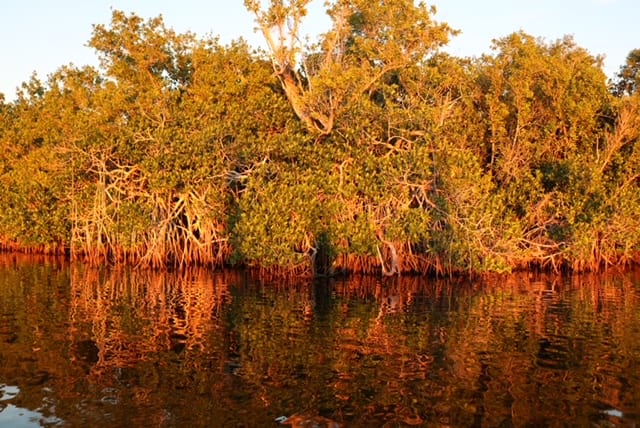 When we got back we packed up and headed home, waiting for Chad and the boys to return to the shed before saying our goodbyes.

This trip to the Everglades felt like perfect bookend to the near-decade I spent up there in search of the six, and I was happy to share it with the people that made those trips worth as much as they have been to me. It was a fitting epilogue to a good story, and I look forward to returning there more in the future for new reasons. For now those are to have fun and lean into catching snook and the occasional tarpon if the weather allows. The 8, Del’s 127-pound fish caught with Steve (who else?) in 1985 is something I consider from time to time, and once the new year is here I’ll be free to try if I want (in Florida, an angler can only use one tarpon tag per year, so since February I’ve been excluded from anything more than fantasizing about fishing for another tarpon record). The 2 is another option, though after f(l)ailing for three years to catch a 16-pound permit on that tippet I’m not sure I have the requisite obsession to shoot for Dave Chermanski’s 32-pound record.

Whatever happens next is, as always, a product of wild fixation being forced through a strange perforation. I’ll keep on the 4-pound permit record quest with John O’Hearn, fish the tarpon tournaments with Ian Slater, and wait to be brought along for whatever ride leaves next.

More to come, as always