Earlier in the week I was able to get on the water for a day with Captain Zack Stells for some fishing. The last time I fished with Zack we hooked a permit at the end of the day that was foiled by a barracuda taking a bite of a blood knot, and we’ve talked about getting some redemption ever since.

With mini season and the attendant crowds starting the following day, we decided to bump around until we found something worth hanging around for. We left Sugarloaf at 7 and headed to a flat that Zack had seen some fish a few days ago, put on a permit fly, and went to work.

At our first spot we found nothing, and after an hour we moved on. We headed nearby for another place that Zack wanted to try, and pushed the grassy bank for 45 minutes. We saw a single fish that spooked off the boat, and when the bank ran out we ran to another spot. Zack took us to a place that we’d both seen fish on in the past, and the current and sunlight gave us what appeared to be perfect conditions. We had a hard time leaving a flat that looked so perfect, even with the lack of permit. Rays and sharks loped through the falling water, and we could see for a hundred yards in the direction we were moving. Zack and I were both a little frustrated by the fact that such a seemingly perfect place would be devoid of our targets, though after 30 minutes we left for another edge nearby. This time, we made a decision to stick with a long push on a big bank, hoping for something to fall nearby. In an hour we only saw a pair of permit, and I got out of the boat to attempt a wading shot that never developed. Zack poled the entire length of the flat before we ran out of patience (and real estate) and headed elsewhere.

In the early afternoon we were nearly out of patience for permit fishing. Zack took us to a corner a few miles away, and immediately we saw some small wakes on the shallow grass. I hopped out when we saw a transparent tail cock up, and gave chase to the tiny bonefish as best I could. These fish were smaller than we thought, and despite our best efforts at getting a fly to them we were unable. For nearly 45 minutes we waded after the tiny fish, at times thinking they must not be bonefish. Our energy for the pursuit would ebb until we’d see a tiny forked tail prick out, drawing us back in. I tied on the smallest fly I could find in the permit box, but even this was too giant to garner any interest from the bonefish that were, at best, measurable in ounces. When the fishing dried out we got back into the boat, heading along a deeper line to find a permit. Zack spotted the first group, and I hopped out of the boat to wade after them. These fish tailed hard once after I got in the water, though after the suckering in there was nothing to be seen and I got back in the boat. We had another group of fish appear in the glare, and but even though we got the fly in play they were too close to feel comfortable and they flushed off the boat. Another hundred feet brought us in range of another school of fish. We had an over-the-back shot at the group of permit, and despite the fact that the fly landed where it needed to the fish showed no interest and continued on their nervous little way. Despite the fact that we hadn’t yet caught a permit, it was clear that we were among them.

In a few minutes we were approached by a school of nearly 50 fish, which had the decency to show up in time for a cast and at a good angle. I put the fly in front of them and stripped it, and a few fish came near it and appeared to eat. I stripped until I was out of them and re-cast into the front of the group, at which point there was a flurry of activity around the fly. I stripped to come tight as the fish approached the boat, though each time I never felt anything and had to keep moving the fly to keep up with the leading edge of the school. As shots go this one had been perfect, and Zack and I were more than a little dismayed as the school moved within 20 feet of the boat and started to spook before we had come tight. As the fish took off I watched the leader follow behind, and tightened up on the line to set the hook. The fish took off with the school, and Zack pushed after the fish when the line cleared. With the benefit of hindsight, we thought it likely that the permit had eaten the fly early on in the transaction and we had simply been retrieving slack as they approached, not coming tight until they flushed. The fish wasn’t huge, but was the redemption we had been seeking. Zack grabbed the fish and held it for a photo: 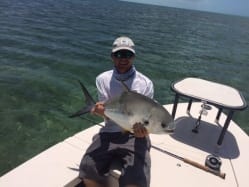 After the first picture we took a selfie (my first ever!) to further mark the occasion: 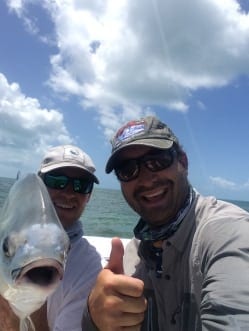 After we caught this fish we had to head back to the dock, and we couldn’t have been in a better mood for the ride. Redemption in permit fishing is hard enough to find, and it made our day to stick with a plan and have it pay off at the eleventh hour. I’d like to thank Zack Stells for another great day, and I look forward to fishing with him again.

As far as current conditions go I’ve been hearing that the fishing is good, if shifty. There are some clouds that are getting in the way of good visibility, and late July is shaping up to be a windy wind-down to the busy season. The upcoming forecast is cloudy with a chance of thunderstorms–typical August stuff.

Chad Huff arrives tomorrow evening for three days of permit fishing, and he’ll be in pursuit of his first one on fly and I’ll be along for the ride. Monday we’re with Ian Slater, and Tuesday and Wednesday with John O’Hearn.