After the week full of wolf hunting that I left off with on the last post, the tournament proper began on Thursday. The actual competition wasn’t supposed to begin until the following day, so Thursday was for us a prefish day to find what we needed and make the most of an opportunity to scout.

Joining John Benvenuto and myself was Steve Huff. Steve and I often fish right after the Cuda Bowl, so we’ve often talked about what a great tournament it is and how someday he might come down and fish it. Add to that the fact that Steve has a decades-long love affair with the target species, and we had a recipe for some fun on the water with his company this year.

Our prefish day started out with a bang: the first cast on the bank, made clearing the line, came tight to a nice 35 inch fish. Even though it was only downhill for our stats from there it was a great way to begin the morning. I offered the rod to Steve, who declined–something that would become a bit of a pattern over the next few days. We had a great shot at a large battery of fish over a white spot, but the larger fish seemed as if they’d been fished over already and we were struggling to generate some interest from the larger specimens. Over another white spot we again spotted a giant, and again the fish was completely disinterested  in our silly fly game. We soon moved on to parts different, and here Steve finally took the rod after I caught a nice big one, a fish sliding down the grassy bank into the current. Even though the light made the shots tough, we could often catch a glow from a fish as it passed us and get a shot off in time for a grab.

After I caught the larger of the fish that day, Steve got up and had a number of shots at large fish. The fishing was good but made tougher by the wind, but Steve made it happen with a nice fish pretty early on: 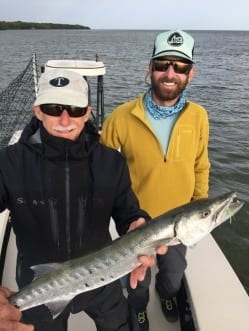 With this, we were happy knowing we had something to exploit the following day and we moved on. We bumped around from spot to spot, finding a few here and there but nothing to get too excited about. We spotted a large permit tailing around, and even though I rigged a permit fly and gave a walk in its direction we never had a proper shot at the animal. We moved around again and again, looking for some barracuda Valhalla that we couldn’t find. We did find a population of smaller fish that would be helpful to fill our scorecard in the event the going got tough in the tournament, and when we looked at the clock it was past time to leave to make it to the captain’s meeting on time.

At the captain’s meeting, we sat down and discussed what our plan should be for the tournament days. With the fast-approaching nuclear cold front, we realized that our best bet would be to make a run for some inside spots and hope to fill our scorecard with some smaller fish to at least eke out a slight lead going in to day 2. In the Cuda Bowl more than any other tournament, each day matters. Since the score from day one is set and can’t be added to, any advantage (or disadvantage) acquired on the first day is brought into the second day. With this in mind we made every effort to formulate a plan that would leave us with a full scorecard on day one, however small the fish might be.

Early the next morning, as I was getting my rods in the car, phone calls started to circulate from Justin and Loren to the members of the rules committee about whether or not to cancel the day of fishing due to weather. With gale-force gusts, the front had arrived. Ultimately, the responsible decision was made to cancel the first day of the tournament. With the weather slated to be less windy on the next day, a two-day tournament became a one-day event. John Benvenuto and I drove up to a boat ramp anyway, and looked at the water to see if we could make it out. To save my arm for what we thought would surely be a day of blind casting to come, I elected to take the day off and get some rest. John went out anyway, and when we met him that evening at what would have been the check-in he told me he had indeed poked around and hooked a few cudas. Despite our lack of a start, it was nice to know that our decision making was sound going in to the last and only day of the tournament.

Early on Saturday, we met Steve at the ramp and started talking once again about what exactly we should be trying to do. With the weather the day before causing no small amount of muddy water, our hope was to find an area that would be clean enough for what we needed to do. John pointed the boat where he wanted to go, and when we got there it looked better than we could have hoped for. I started off by taking a few blind casts in the current, and within 20 minutes we had a small fish to score. Another half hour, and another came on board. The fishing, while tough, was being really good to three guys that had higher hopes than the conditions would indicate. Here’s a picture of the first fish we caught: 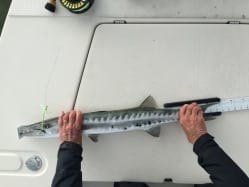 Our scorecard was nearly full, and this was the first time I offered Steve the rod. For the first of five times, he refused. In a tournament where we would be competing against one another, it seemed like Steve wanted to give us the best chance possible at a win: no surprise from such a consummate professional, but a more than generous gesture nonetheless. We moved on, and soon John spotted a giant barracuda leap out of the water eating baitfish. We staked the boat off and took a fair number of casts in the area, never finding the fish with our fly. Another jump from another large fish caused us to stay in the spot a little longer, but we remained without a connection to the large bait hunters. As we moved down the edge we caught another on a blind cast to fill our scorecard, and while there was a 33 incher on the low end of our three our two biggest were right around 37 inches–not bad for a tournament in which a 40-inch average has become our highest hope.

In short order we had a small amount of sunlight and John made good use of this advantage. We had a shot at a giant fish on a prop scar that didn’t even blink at the three casts we took at it, and a battery of fish that I lined on a shot taken too early. John spotted a nice fish behind the boat, and I tossed a fly in its direction. A different smaller fish ate the fly, though when we caught it we were far from displeased: with the addition of this fish (39.75 inches), we replaced our 33 incher from the first hour. Here’s a picture of the barely under 40: 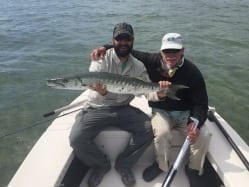 As soon as we released this fish, I stripped off the line and saw a blue-grey smudge. Upwind from us by many more feet than I could cast was a large barracuda, facing left and waiting for a fly to cross it. John poled the boat into position and we lost sight of the fish as another cloud went overhead. After a few more minutes of waiting we had a small slice of sunshine make it down to illuminate our efforts, and that was all it took for the fish to get seen. John moved us a touch closer, and we made a single cast at the now glare-covered fish. In the clouds I couldn’t see the fish move on the fly, though a grass colored missile behind the fly confirmed that we had done things right. A brief speed increase caused the bite, and the big fish tore off from the flat into deeper water. We almost lost the fish when we cleared the line, but once it was on the reel we made short work of the monster. John didn’t start the motor even though we discussed it, not wanting to spook any other giants that may be in the vicinity. We soon netted the fish, and when we put it on the tape it was 45.25 inches. Our average was over 40 for the first time in our years fishing this tournament, and John and I were more than happy with that. Steve again declined an offer to fish, and with that John and I were gunning for an upgrade.

We fished for another 3 hours, pushing ourselves to try for another giant. There were no more giants in our future, though we were able to upgrade our 37 by a whopping quarter inch in the final 20 minutes of fishing.

We got back to the dock, got the boat together, and headed down for the awards ceremony. There, we found out what had happened for everyone else:

Dustin Huff had been bitten by a large barracuda, and needed stitches. Dr. Matt Reid took care of the honors at a booth in the bar.

Derek DeYoung guided Chad Brown to a win in the spin division with 137.75 inches in his three largest fish.

Ted Margo, fishing with John O’Hearn, had caught three large fish to get second place with a score of 132,5, and his largest fish was the largest on spin as well.

John Benvenuto and I were able to win the fly division for a third year in a row with a 3-fish score of 122.25. Our 45.25 incher was the biggest fish on fly.

My friend Zack Stells guided his angler Will Beggs to a second place finish in the fly division, with two fish and a combined score of 61 inches.

Dustin Huff won third place in the spin division with his angler John Schwab catching a 3-fish total of 130 inches.

Third place in the fly division was won by our shop manager Dave Kolhage, fishing with Brandon Cyr. They caught one fish that measured 30 inches.

Winning the ladies division was Heidi Andrews, fishing with Chris Trosset, with a score of 99 inches.

Most releases was past winner Lance “LG” Gleason, fishing with Jared Cyr.

Once again, I’d like to thank John Benvenuto for a seriously great effort in this tournament. The fishing wasn’t easy, but he made some good calls and stuck with them until they paid off in full. It was great to have Steve along, and I swear if he comes back I’m going to force him to pick up the rod more.

That’s it for the waterwolfing on these reports. I leave tomorrow for the Everglades for three days of fishing with Steve again, and I’m sure I’ll have another all night battle to write about. I promise, we’re working on it.