Before the front we’re currently experiencing I took a few days to fish with Ian Slater earlier in the week. On Monday we were joined by Blane Woodfin, a friend of mine through the shop. We were again strictly focused on permit, and as these two would be the last two days I had to permit fish before the Merkin starts next week I was especially interested in making something happen. We met on Monday morning and made our way to where Ian thought we could find a fish.

The weather was nice, if windy, and we looked hard to find some fish to throw at. Blane was welcomed by a group of exactly zero permit in the first half hour, and I was up at the next spot. There we had two shots at fish that looked like they could work. Neither worked out, though they each could have. The first was a close fish that was moving fast at us, and my cast wasn’t close enough to get things done before the comfort line was crossed. The second fish gave us a far better opportunity, and I was able to get out of the boat and approach it on foot. I got the fly there in no less than three attempts, but on the third cast it looked like things were going to happen. The fish spun around and tracked the fly hard before bolting when I stripped the fly, and we all felt like this was a close chance that had every indication of working with a little luck. We had another lo-fi shot at a pair of smaller permit that appeared spooked from the outset, and after Ian poled off the flat we relocated for parts nearby.

We bumped our way around some tough fishing for the rest of the morning and into the early afternoon. Blane stayed up for a spot, then me, then Blane once again. We had two interactions with permit at the last spot that didn’t include casting before Ian felt the urge to stretch the Yamaha legs. We ate lunch on the way, getting our travel on. At the next spot we found a fair number of shots, though the conditions were challenging. The current and wind were working together to keep us from a steady line, and Ian had to expend a superhuman effort every time he turned the boat for a close shot and we slid off the bank. Despite these bitter issues we were able to piece together a few sweet permit shots. I had one tail hard after the fly, and while we didn’t come tight we all thought she had at least taken a swipe. Blane was up after I had a few shots, and had a hard look from another permit that in the end elected to look for other crabs.

When the fishing there ended we took toward another place, one that was miles in the other direction. Ian put us up on a shallow bank, and as he did he pointed out a nervous wake headed in our direction. I got out to give it a walk, and immediately saw a grey tail-knife shudder hard in the center of the ripple. I got a somewhat reasonable cast off in front of the melee, and while I was expectant for a turn towards the fly the fish instead hit the leader and wiggled off to the deeper water. I trudged back to the boat for the post-shot analysis and as soon as my feet were dry Blane pointed out another tail near the deeper water. I got out and gave this second scythe a walk, but was challenged by the fact that the fish was keeping a low profile and not pushing a defined wake. Every 10-15 seconds the fish would tail, and I would make a cast up current of the commotion. Each time, however, the fish would skate down current before turning into the tide to feed again. I wasn’t prepared to throw the fly down current of the fish given the angle, so I just kept running the numbers and trying to get the fly near the tail as fast as I could each time. Eventually I got the fly in play just as the fish fed, and was sure things were about to come tight. They did, and I watched the wake push into the deeper water with my leader following. Instead of a permit, however, I was tight only to a thieving blue runner, come to steal the glory (and the yarn crab). Sadness, as is so often the case, prevailed.

We hung around the spot in rapt expectation until the tide got too deep, and made one more stop on the way home. Blane had a half shot at what was possibly a school of small permit, but at this point our optimism was not enough to lift the sun and we went home.

The second day of fishing was markedly different than the first. Ian made a decision to make the afternoon run from day one immediately, and when we arrived in the zip code of the challenging shots we’d enjoyed the day before we were hopeful for more. We pushed a flat, found nothing, moved on. We made another move, this time finding a pair of shots. The first was at a pair of fish that I had a hard time seeing before they were too close, and the second was at a school of smaller fish that swam past the fly without making a move. We picked up and moved on in the late morning for parts far away.

We spent the balance of our morning and into the early afternoon in search of some fish we never found, and when lunch time rolled around we ate and moved again. The conversation drifted to the topic of where to go next, and Ian and I decided on a plan to go somewhere neither of us had spent much time. The light was good for sure, and we were somewhat convinced that the tide was right, and Ian picked a line that we felt might work. In 20 minutes we spotted a large permit on the light bottom maybe a hundred yards from us, and Ian had time to get us into a solid position before staking the boat off for me to take a cast. Ordinarily, a long-play shot like this is just a matter of seeing how I mess it up: I’ve always been more reactive than premeditated, and as we climbed into position I was sure I was going to choke. Amazingly, I didn’t choke at all: the fly landed exactly where I thought it should and I was rewarded with a superb bite from a very large permit. I set the hook and set about clearing the line, which is where the wheels finally came off. The line on the deck jumped up, pushed by the wind into the back of the casting platform and coming tight on both corners as the permit swung hard toward deeper water. I had time to swear and to move my left hand to clear the catch; neither of these things helped. The fish came tight and the fly pulled out, and Ian and I were left with nothing to say except forget it, let’s just keep on.

I had another shot at a single fish that I summarily botched, and while the fish looked interested in attitude it wasn’t as forgiving as my terrible presentation required it to be. We fell quiet, thinking about the next shot instead of the two lost ones, and when we saw a pair of smaller fish near the boat we got a short cast off in their direction. The first fish ducked the fly when it saw the boat, but the second of the two made a beeline for the yarn crab and ate it on the strip just 20 feet from the bow. I stepped down to make sure the line didn’t catch the platform again, and when the line cleared Ian pushed after the fish. The work was short and soon done when Ian grabbed the little guy for pictures: 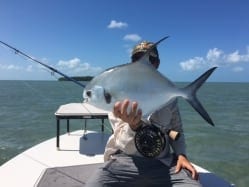 After we had the taste of redemption we felt as though we could easily get another one. The wind still howled, and with the sun’s shifting position Ian had to push into its teeth. For his efforts we were rewarded with three great shots. One was at a barely visible small fish that kept changing direction when the fly landed. The second was at a pair of fish that looked perfect when one of them lined up the fly but less so when it didn’t eat, and the third was at a large fish that ignored the two casts we were able to get in front of it before it found safety in deeper water. When the light ran out we left for home, a small permit and a large amount of redemption on the board.

I’d like to thank Ian for another pair of great days on the water, and to spend some time on the skiff with Blane was great. I’d be surprised if this was the last we’ll hear of fishing with Blane on these pages.

The Everglades trip has been pushed back due to weather: we’re now fishing Wednesday (tomorrow) through Friday. I’ll be back late on Friday, and the Merkin starts on Tuesday with our fishing beginning on Monday. It may be possible that I’ll get the report from fishing with Steve up here before the Merkin starts, but that’s not a guarantee. Reports will follow for both one way or another.