On Tuesday I fished with Vicky (my mother), and Aaron Snell. My parents have been in town since Friday last, and are fishing with Aaron this week. I had the day off and was invited to join them, and I was glad for the chance to get out during a time I had no fishing for myself planned. The weather had finally gotten (somewhat) normal after last week’s wind and cold, and we were looking for good things to happen.

We started in the morning at a tarpon spot, which proved early on to be a good call. Aaron found a rolling group of tarpon, and after 20 minutes and some re-positioning Vicky got a cast into the group. She missed the first bite, and had another a minute later that also didn’t connect. Her third bite made contact and stayed tight, and soon a very large tarpon went flying. Aaron poled away from the group of fish and cranked up the motor when we were away from the school. Vicky pulled on the fish as we chased it down, and shortly we were able to get the leader release on near-100 pound fish. After tightening the drag and pulling for a few more minutes the fish took to the air and ejected the hook to end the fight in a perfect way. I was up at the next spot, where Aaron again deftly got us in range of a rolling fish. A few casts later and I was tight to a big one, slightly larger than Vicky’s earlier fish. I haven’t done much tarpon fishing lately, and what I have been able to piece together has been on 6# tippet, so I was eager to take this fight to the side of the boat. I pulled on the fish for maybe 20 minutes, and came close to floating the fish before a bull shark showed up. I immediately broke the fish off and we circled the shark, sending it angrily off into the depths. The tarpon found shelter in some skinny water and we watched it get its strength back while we continued to idle in case the bull shark showed up again for another look. Once the fish headed off into some safe water we pulled things in and set out to try for a bonefish.

At the first spot we didn’t see any, but we stuck with it for a half hour. We tried elsewhere with the same result, and soon Aaron took toward a place for a permit. After a brief look at a piece of water in search of a school of permit that we didn’t find, Aaron brought us to a flat a few miles away and we started to look for something to throw at. I was up, and it wasn’t long before we had our first shot. A single large permit dug hard into the flat, kicking up a solid puff of mud. I had one shot at this fish that could have worked, but my line was tangled and I didn’t get the fly even remotely close to where it needed to be. By the time I reset for the second shot the fish had felt the boat and moved off. In a few minutes we had another shot, and this time it was at a small group of permit. The first fish got thrown to first, and while it looked interested it never committed. The second fish had a less good shot to look at, and was equivalently disinterested. The third fish I never got a shot at, and when the fish picked up speed and started to move away from us I got the fly in front of the lead fish a second time. This time the fish spun and did its business perfectly, and we were soon tight to a permit. I fought the fish for a while as Aaron poled it down, and a lemon shark took some interest in the events but was scared off by a pole to the back of the head. Vicky was up for the grab, and after a few attempts we had the fish in the boat for a photo: 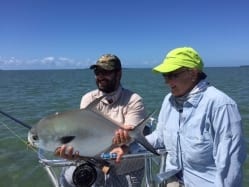 After the easy capture (I literally can’t say how nice it was to have an easy permit capture come together sans stress and tournament jitters), Vicky was up for her shot at a permit as well. She had four or five shots, but it was the first one that sticks in my head as the one worth discussing here. A large single permit was first on the block, and it gave us a few spectacular chances. Twice the fly was in a place that we felt could make things happen, but each time the fish would change direction and cause a re-cast toward the new window. Finally the fish moved off, and while we had a handful of shots afterward we never had as good an opportunity as this first one. We stuck with the permit program, though after the flurry of activity we struggled to find a shot. I had two shots in the late afternoon, both at single fish and both hard to see in the failing light and off color water. Neither worked out, and the second of these was particularly frustrating as I donated a high quality shot to some low quality line management. When the spot was finished Aaron took us to a place in search of a bonefish for a boat slam.

Vicky was up at the last spot, and the bonefish were there in good numbers. They were hard to see and moving quickly, and more than a few times our efforts were foiled by the targets changing direction or bouncing off the boat. After a few shots that didn’t work out Vicky was able to get tight to a nice bonefish that made things right. She fought the fish to the boat and we took some pictures; sadly, I don’t have these to share.

I’d like to thank Vicky for the invite and Aaron for the great fishing, and I’ll be getting out next week for a day with Howard Davis and Ian Slater as well as a day with John O’Hearn as John Kelleher’s guest.