Last week I was able to get out on the water two days. Both were invitations to fish with friends of mine–on Monday I joined Howard Davis fishing with Ian Slater, and yesterday I joined John Kelleher fishing with John O’Hearn. I’ll start with the earlier of the days, with Howard and Ian. I was excited to go straight tarpon fishing for the first time this year. Despite hooking one with Aaron a few weeks ago and a few with Steve in the Everglades before the Merkin, I have been unable to get an actual capture under my belt this calendar year. Armed with my new knot (thanks Steve!) I hoped to get a hand on a big one.

We left at a reasonable 8:00, and settled in for a long ride in search of something to throw at. As is often the case, April can be a hard month. With the influx of people from out of town looking for some instafame, if there aren’t a lot of fish to be found it’s far easier to come across a skiff not adhering to etiquette than it is a tarpon that hasn’t been affected by the lunacy. We looked in a spot and found a single shot, which I summarily botched. Every year, it seems, I’m amazed at how different tarpon fishing is from permit fishing when I make the switch in the spring. After figuring out that the fish were not there in any concentration we headed elsewhere to find more. I was up again at the second spot, securing some extra bow time from Howard who generously wanted me to get some more shots before the change over. We poled in to an area nearby, and soon saw a few fish rolling in the adjacent channel. I threw at the rolling fish a few times, coming tight on my third cast up current of the fish. I set the hook and Ian started the motor to give chase. After a few minutes the fish hadn’t jumped, and I made the stupid mistake of saying out loud that it felt like a 50-pounder. As soon as I said this the fish came out of the water to stand up for itself, all 110 pounds of it.

We fought the fish for 20 minutes, giving the new knot a workout. The fish stayed deep for some of the time, then ended up on a flat for the end game. Ian tried to grab it twice before we got the big fish to hand: 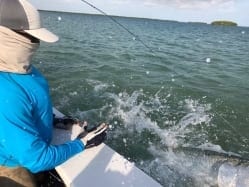 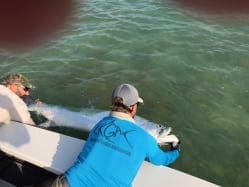 After that, we felt pretty good. Despite the tough weather we had what we came for in the first two hours of the day, and now it felt like a matter of how many more times we could make it happen. Howard took his rod to the bow and we set off to make another tarpon dry.

We fished a spot, then another, finding nothing. The day wore on, and we continued to put forth a hopeful effort. The fish were not around; what we did find, however, was a constantly revolving population of skiffs in most places. If we had been fishing for a flats boat, we would have had a ton of shots. The day wore on, and Howard stayed up for the duration in hopes of evening the shot count. At 4 PM we finally found a small wad of tarpon, and Howard had a dozen difficult tarpon shots happen in short order. The issue with this concentrate of opportunity was that it did not allow for any preparation for the shots or restoration to baseline after each one. I’ve been in the same situation in the past, and rapid fire shots are always a hard thing to make happen. This was no exception and the poor attitude from the fish only added to the difficulty of the shots that arrived suddenly.

Howard fished for a while, then I got up. I had a hard follow from a large fish, but I was unable to make things happen and continued to work for a shot. Howard got back up after I flailed away, and when the fish were clearly over it we moved in the direction of home. I’d like to thank Howard for the invitation, and Ian for the hard work and the first proper grabbed fish of 2017 for me.

Towards the end of the same week (last week from when I write this) I was invited to fish with John Kelleher and John O’Hearn. Our fishing was slow, but the conversation was great. Our plan was to look for permit, and the weather reminded me of what Mark Richens has since deftly renamed the “March Misery”. Despite the tough wind and dropping temperatures, John was able to find us a small group of permit bouncing around in a deeper basin, and the other John was able to get a few casts off into them. A few times we were all hopeful that something might happen, but sadness prevailed and we headed elsewhere for a look.

Despite our best efforts the fish eluded us, though John Kelleher hooked a nice bonefish at the end of the day that came unbuttoned on a long run. We headed home when it was 5, ready to move on from what was a tough day on the water.

Since I’ve been lagging on these reports recently, as well as fishing more, I’ll include the day I had on the water yesterday with Ray Fetcher as well. For any of the readership here that doesn’t know Ray, he’s one of the best to ever do it and wears it humbly. Fitz Coker has had these days with Ray for nearly 30 years, and this year a bout of nasty flu prevented him from making them so I was offered a chance to get out on the water with Ray and jumped at the chance to fish with a giant.

The wind hadn’t let up (it still hasn’t, as I sit here the day after fishing, and sadly it isn’t going to in the near future), and Ray and I headed out for a look. Fishing with Ray is much like fishing with Steve Huff–most of the time, I’m acutely aware of who I’m fishing with and just trying not to screw up the shots. We found a few permit shots in the early part of the day, after a few brief glances elsewhere for tarpon yielded nothing. The first shot was a at a close pair, and while the gap between us was insufficient we were still able to count down a crab fly to a place we felt good things could happen before they split. We had another few shots at some fish that happened across a bank, just as Ray said they would. In front of these fish we were able to get a few shots, garnering attention from one of the group before receiving a polite “no”. We moved on, still on the hunt for a permit.

The permit fishing slowed for us mid day, though we were able to get one more shot at a pair of permit that had taken up residence in a white spot next to a barracuda. These fish ignored the fly in typical fashion, and after the shallow ran out we moved on.

At our final stop of the day we grabbed the tarpon rod again, and we were rewarded with a number of good shots for our patience and hard work. We about six shots at laid up tarpon, and on the second of these I was able to come tight to a large tarpon (it was dwarfed, however, by a large fish that lay next to it). The fish took off and airborne, and I started pulling in hopes of catching it properly. The 16 held, but the 80 did not–once again, I’m forced to re-think my leader assembly (and potentially the laws of physics themselves) due to broken shock tippet.

Ray returned to the bank and we had the next four shots, and on two of these we had great interest but no opening on behalf of the fish. When the edge ran out we took off and headed home.

I’d like to thank Fitz Coker and Ray Fetcher for the great day on the water, and I can’t say enough how much of a great time I had out there. The fishing was great but the company was the best part.

Tomorrow I’m with Simon and Thursday with Ian, reports will follow.