Yesterday I had the opportunity to spend a few hours on the boat with Ian Slater before his shop shift started at 2. We got on the water early, and first took a look for a permit. Our first look netted us nothing (ha! get it?) and we moved after an hour to look for a tarpon. We had a slow but steady flow of fish, and were able to get a large one to open its mouth. As last time with the tarpon, the shock tippet broke once again–thankfully, I’ve got some new material at home to work with.

Following another hour or so of tough fishing Ian decided to make a run to new places, in search of permit once again. The fish we found were in a large rolling school and acting strangely. We took three separate shots at them before getting a fly in the middle of the school, coming tight as they passed over the fly. Here’s what the end of our short day of fishing looked like: 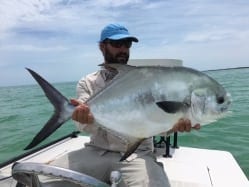 It was fun, as always, to fish with Ian. We’ve got summer plans already in the works for more of the above.

Sunday and Monday with Simon, and then Thursday and Friday with John O’Hearn in preparation of the Goldenfly tournament that starts Monday.