After the Cuda Bowl I’ve decided to devote the balance of my efforts to permit fishing leading up to the March Merkin. Ian and I had a few days off together, and hatched a plan to get out and permit fish. We had some decent weather, and though there haven’t been tons of permit around we were committed to our plan. In addition to the permit rods, however, we brought a cuda rig to pass the time and process the frustration should we find the permit but not catch them (or not find them at all).

We started off looking for barracuda, keeping an eye out in the early light for a shallow tail as we covered some deeper water. Finding nothing we moved on, falling in to an easy rhythm of barracuda fishing with a watchful eye. We made our way to a deep flat and fished for barracuda as the tide began to move, getting some fish to chase but not getting a bite. After the Cuda Bowl the fish seemed to be in a slightly sour mood, and when we saw a large group of permit glide toward the bow and threw the wolf candy for lack of anything else we quickly changed to the permit rod for the rest of the flat. We had another shot at this same group in a few minutes, though by the time we got the right fly into their midst they were already on their way away from us. We saw a few giant permit sliding through a nearby white sand hole, and waited to get a look at them at closer range before we pushed on. The fish never showed again, but as we slid down the bank a single fish showed up that we had a relaxed shot at. The fly landed in the wrong place to start, and when we put a second shot on the fish our welcome mat wore out and the fish darted off. We felt like things would continue to improve, though the single fish was the last we would see for the next few hours. We made our way fishless through the rest of the bank, and when Ian got an idea to head elsewhere for a look at a later tide we took off.

Arriving early for the tide Ian was planning on caused us to take some time out from permit to try out some new barracuda flies Ian had tied. These did the trick, and where earlier we had a hard time getting the fish to play this time things worked out differently. We broke a large fish off on the trim tabs, landed a smaller fish, and had another large one come unbuttoned on the hook set. When the new specials ran out so did our luck, and I can say unequivocally that the new flies are the finest teeth tickets I’ve seen in a while. We ran around to where Ian’s mind had taken him earlier, and pushed a long bank for a low-quality shot at a pair of fish that I couldn’t see in time. Ian soon took us to another place, and it was here that things got right. I had a shot at a tailing fish that I struggled with in the wind, which was still blowing despite the slick on the surface. I followed the fish for a while until I could make the angle right, and when I did everything worked out in the best way possible. I got back in the boat so Ian could pole after the fish, and shortly we had something to model for a photo: 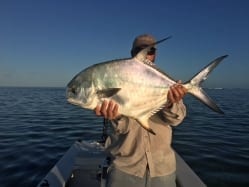 As soon as we released that fish we had the chance at another, though this next shot was foiled by a poor cast at a tough angle. Ian soon spotted another tail tip, and I hopped out to make a go of it. The fish tailed again shyly, and when the cast landed I thought it was likely things would work out in our favor. I didn’t quite figure out that the fish had eaten it right away, though when I tried to strip in for a re-cast a heavy moving weight confirmed the fish had erred. This fish was larger, and took off for deeper water as Ian poled over to me to pick me up for the chase. We pulled on the fish for a while, sighting in our estimates of weight until we grabbed the fish. We weighed the fish at 22 pounds, a few pounds shy of our optimistic estimates, and we took a picture to mark the occasion:

After we landed this fish we were out of time, and headed home.

Our second day of fishing brought with it yesterday’s high hopes, and we decided to give it our best effort to get another permit. We bumped around for most of the day without finding much to hang our hats on, though we did find a few opportunities to keep us on our toes. We had a large group of suspended permit in water that was too deep to wade, and after an hour took a few shots from the boat before moving on. We had a large single cruising permit that made no effort to change its course despite our repeated casts in its direction, and we had some further disinterested barracuda over white sand.

We found a few tailing fish that never gave us a shot until we again found a small pocket of activity in the afternoon. I had a few shots with a fly that didn’t work, and when I changed it to the right one we were rewarded with a two-pronged tail ravage that was great to watch. We thought the fish was smaller than it was, and after starting the motor to keep any interested sharks away we made less short work of the animal than we’d hoped to. Ian grabbed it nonetheless, and we held the volunteer up for some documentation: 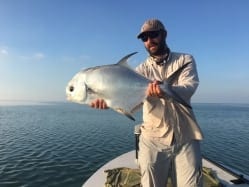 After this fish I was seeing more fish in our future, and we made our way back into the fray for a look. I had a few shots at fish, now acting more insubordinate than ever. I had a total of three very close calls, though in retrospect I may not have been as close to the next one as I felt at the time. When the second of the three opportunities expired I was taken on a long walk by a permit in ever deeper water. Every 20 to 30 seconds the fish would tail, and I made every effort I could to figure out a plan from the scattershot indications. I made my way into a somewhat decent distance after 20 minutes of hard pursuit, and when I got the fly where I thought it needed to be watched a swell of water race of the flat, an unconnected permit safely confined in the slick bulge. I sulked back to the boat and got in for the long (and now wet) ride home.

As frustrated as we were for not having put a second fish in the boat, we soon realized that catching three permit in two days of marginal fishing was equivalent to getting away with it, and we were much happier when we arrived at the dock. I’d like to thank Ian for putting out a great effort and getting me back into the permit groove for 2017. I’ll get another day in with Ian on Tuesday, and earlier in the following week Chadillac 305 will come down for two days of permit fishing with me and John O’Hearn. We may try to throw some 4 lb, which would be a blast if we can find a fish big enough to make things happen with.