On Tuesday I again got out with Ian Slater for a day of Merkin preparation. We’ve had a good run together recently, an as there’s nothing quite as nice as momentum we welcomed the chance to do it again. The weather was nice but incredibly calm and we figured we would have to wade if we were to do anything at all.

At our first stop of the morning Ian found us a pair of fish tailing, and I walked up to them but didn’t make things happen. The fish weren’t feeding aggressively, and while I would like to blame our lack of completion on that fact alone there were a few casting errors that contributed to our sadness on the first shot. The next shot came when the tide was moving more, and though the fish appeared more compliant I was again unable to make things happen. When the tide started moving more the fish did also, and I had a great shot at four fish slowly crossing the flat in front of me. I took a few casts that could have worked, and one perfect opportunity at a fish that headed towards me and tailed hard was foiled when my line got caught in the grass behind me. I let the group of smaller fish pass me by, hoping for another chance at a fresh crowd. The small group passed near Ian, and when they looped back toward me he told me to give them another shot. I put the fly in front of the now faster moving group, and was tight without any activity from the fish. The permit raced off into deeper water, and I quickly made my way back into the skiff to give chase.

At first I thought the fish might be foul-hooked, which I assumed was the only reason a 10-15 pound permit could get that much backing out on me. The longer the fight continued the more convinced I became of the foul-hook scenario, until we got the fish close to the boat and realized how big it was. How a fish that had passed within 30 feet of me in 16 inches of water as a schoolie could turn into this thing I have no idea, but I certainly won’t ever turn down a giant. The fish weighed 26 pounds on a certified scale before we let it go: 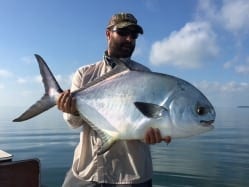 After a spectacular start, we returned to the spot to see if we could get another. Finding that the fish had moved on we did the same, and Ian soon had us in a new spot. We stood by for the tide, seeing a few fish peeking softly from the deeper water every so often, waiting on the water. The level got right and soon Ian spotted a shy tail for me to walk at. I got into position and threw the fly, hoping the fish would see what we had to offer. Ignoring the fly, the fish continued on its way and I threw again. Again the fish ignored the fly, and I made a close shot to try to force an error. The fish didn’t like this very much, and spooked off the flat when the fly landed. I thought the fish might come back, but didn’t expect it to be as close as it was when I looked to my right and saw a pair of little alien lips pursing at me from less than 15 feet away. I tried to get the fly in front of the fish, but the leader wrapped around the tip of the rod and I was forced to watch the permit over one shoulder and shoulder the burden of a tangle over the other. The permit gave me the time needed to get the tangle undone, but as soon as I put the fly in harms way the harm took off, scared now and not to return. Soon Ian spotted another incoming animal moving in a predicable line. We got the fly in front of the fish and the permit rushed it, slowing down and sticking its tail up when it got close to the fly. I felt a tick as the fish hit the leader, and thought briefly the fish might be hooked. Instead, the spooked fish took off and we were left without anything to pull on.

We had another shot at a group of three fish on this same flat that didn’t succeed, and it soon became apparent that things were draining fast. We went around to a nearby flat for another look, but never found anything more to play with and headed on. Ian got an idea to run to new ground, and we racked the rods and headed to where he had in his head.

At the next stop things had slicked off to past mercury, but we soon used the calm to our advantage and saw a tail tipping up a long way off. I got out of the boat as far from the fish as I could and made a soft approach. I ignored a school of bonefish on the way to the permit, though I did get to see some up close mudding from them before they waked off to deeper water. When the permit was within range I took a cast in its direction, seeing it now in the water despite the glare. The fish swung wide away from the fly, and I couldn’t see where the fish had gone to. I spotted it away from where I’d cast initially, and had to make a severe angle correction to get the fly in the zone. The fish spun around and parked with its tail just piercing the gloss, looking at the fly. I didn’t know what to do except bump the fly as softly as I could, which I did. The tail shimmied upwards and I watched the alien lips part, felt the fly get sucked in and set the hook on the now very upset permit. I thought this fish to be small, though when it made its way off the bank and into deeper water we were again surprised at how big it was. Ian snapped this picture of the permit, our second for the day: 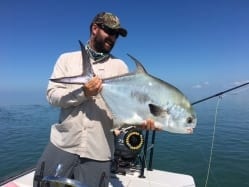 We were both excited and energized that our play by play had kept it so 100, and we went back to the flat to find another thing to throw at. The bonefish school was still rumbling around, and I caught one easily. Ian got one, then I got one, and soon we were in the middle of a bonefish blizzard. I stopped fishing after my second, and Ian caught six (!) before we looked for another permit. Here’s a few pictures of the madness: 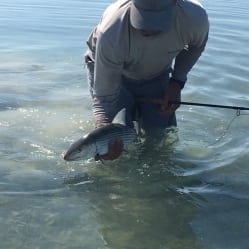 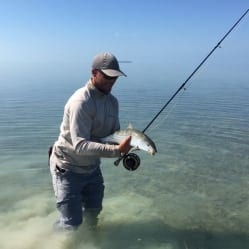 I soon had another shot at a permit, though this fish ignored my fly repeatedly and kept tailing. I stuck with the fish for a while, never getting the feeling my advances were welcomed. I bumbled around for a half hour in search of another opportunity, and soon we found a few groups of permit moving towards us in the slick. In the deeper water we were hardly able to see them, and when I threw the fly in front of two of them I was off target and sent them into deeper water. I stayed put, thinking about what went wrong, and saw a slight crease on the surface. I threw the fly at the disturbance without any real expectation, and on the strip came tight to something I knew right away wasn’t another bonefish. In a few short minutes, we had a third permit as a cap on this spectacular day. Here it is, in its smallish glory: 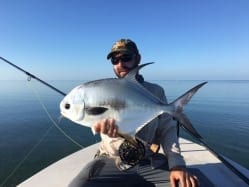 Ian and I tried to get another at the same spot, then went elsewhere for a last look. We found only a pair of dissatisfied tailers, and headed home with a great day under our belt.

I’d like to thank Ian profusely for all of the great times we’ve been having, and I can’t wait to fish more with him. I’m in Merkin shape a little early, which is helpful since the week before the tournament I’m heading up to fish with Steve for the six. On Monday and Tuesday of next week I’m headed out with John O’Hearn and Chad, and we will be permit fishing. At this point, it’s likely I’m going to throw some 4# since the fish are of decent size and seem to be compliant. More to come.