After the two days with Simon, Kat and I divided up the two fishing days that Ian had set aside for Dave. The fishing the day before had been slow for Ian and Kat, who had decided to throw six pound in hopes of connecting with the women’s record. I was up for the second day, and Ian and I set out to see if we could get something done.

At our first stop we had a group of very large tailing fish, which gave us a good shot into them before they skirted our efforts and got too deep to see. We hung around for a while, trying to get lucky, and caught a tailing bonefish as we poked along. Within an hour Ian moved us to a new place, and we again had a good opportunity at some tailing fish. I tried to wade into position, but was unable to get in front of them before they moved away and I was left chasing them down without ever getting a great angle. At this spot we again waited it out, hoping for some more fish to come our way before leaving.

The late morning brought us to a new location, and in short order it became apparent that we were in the presence of many bonefish. We caught a pair of them, and lost another on a botched hook set. We soon decided to keep the fly away from the bonefish as best we could, not wanting to take ourselves out of the running should a permit show up. This happened shortly, when Ian and I spotted a single fish tailing in the grass and puffing mud as it rummaged around. I hopped out of the boat to wade after it, though in the tough visibility I lost sight of the fish. Ian pointed it out to me, but I couldn’t put together where the fish was until it was pretty close, and my cast landed in a less than perfect spot. The fish kicked hard and made a short burst away, then settled down again and went back about its business. Another opportunity gave us the same result, though this time the fish flushed for good and I got back into the boat. Ian and I spent another hour waiting for more to happen, and when we ran out of flat to fish went elsewhere.

In the early afternoon, Ian had us on a bank that was being used as a crossing point for permit on their way to an adjacent channel. We threw at singles and doubles every 15 minutes for an hour and a half, and despite stepping down to a long leader and an 8 weight were unable to find a dance partner. Frustrated, we headed nearby to try our hand somewhere new and found nothing. By all accounts, we should have caught a fish on the shots we had, and I was feeling the familiar frustration of not being able to get something done.

Ian had one more stop in mind, and when we got there things started looking up. A school of tailing fish passed by the boat, and I hopped out to give chase. Ian remained in the boat as I walked after the moving tails and when I lost the race I stopped and waited, trying to stay aware of what was going on in every direction and hoping for a hint. I saw a few fish tail on the grass nearby, and had to drop down to my knees in the super shallow water to keep my shadow from giving things away. I threw in front of a single tailing fish on the outside of the school, watching the little fish pull in behind the fly and shake its way onto the hook. As the fish took off for deeper water I stood up, watching the other fish in the school suddenly decide they didn’t want to hang around to see what I was. I fought the fish for a few minutes, soon grabbing it by the tail. Ian had grabbed the camera, and snapped the reverse: 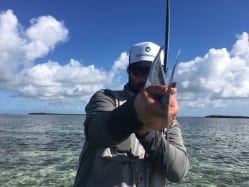 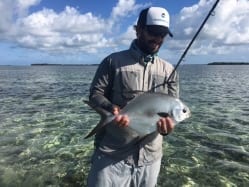 After this Ian anchored the boat and grabbed a rod, and I decided to go walkabout. I started ambling down the flat, and within 45 minutes had gone almost a half mile. I had a good shot at another school that I couldn’t turn into tension, and kept hunting around for something to throw at. I then got (very) hungry and decided to return to the skiff, where I saw Ian get low and start throwing at something. I grabbed a candy bar just as he raised a bent rod, and I grabbed the camera to shoot a picture of his fish as he grabbed the fish by the tail: 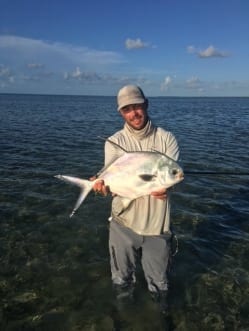 I was “up” next, and it didn’t take long for another pair of smaller fish to come by the boat. I threw in their direction and missed, landing on them and sending them skittering off the flat. I soon had another shot at a small group that did work, and quickly landed our third for the afternoon: 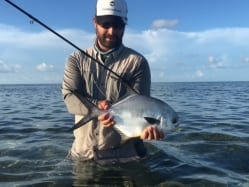 At this point Ian played guide, telling me I had to get three. I was not prepared to argue with this prospect, and stood at the end of a shallow point to get a better angle at a fish headed our way. Ian wound up his rod and stood behind me, waiting and watching. As crazy as it was another pair of fish came through, and I miscalculated the line they’d take and they got inside of me. I could have taken a low-probability shot as they got past me, but instead I told Ian he’d better get one as he had a much better angle. He obliged, and it didn’t take long for him to get the line stripped off and the fly in play. I watched Ian hook our fourth for the afternoon and took pictures when he landed the little guy: 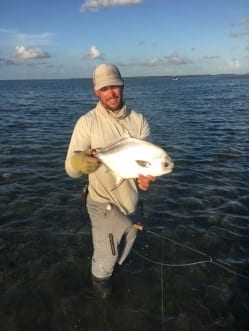 At this point, we were (clearly) very happy. An afternoon rarely gets this good, but as greedy little permit fisherman we were obligated to hope for more. Ian was intent on me getting a third, and I tried my best. We had a few more tailing fish around, but nothing amazing–after two hours of fishing I was no closer to my third than I was when I started. I hooked a fish that we both thought was a permit but turned out to be a large bonefish, and we soon decided it was late and time to get home. The sun was setting, and the fishing had slowed down in the last few hours to a point that made it easy to leave. As Ian and I were discussing this, a small push showed up nearby. I tossed the fly in front of it, a reflex more than anything. We kept talking as I stripped, and when I came tight we were more than a little surprised: after two hours without any luck, just before we were about to leave, I was tight to a third permit for me and a fifth for the team. This fish was a little bigger than the others we had caught, but still no giant. As such, we had it in hand in no time and Ian took a sunset shot to mark the occasion: 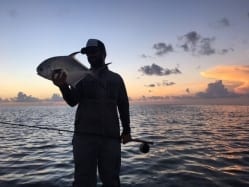 I’d like to thank Ian Slater for another amazing day of permit fishing, and I look forward to spending much more time with him in the months (and years) to come. It’s great when it all comes together, and luck like we had is something that I’m happy to be on the receiving end of. Tomorrow Kat and I leave for Montana to see Fitz and Dotty, and we’ll have a day on the water for trout and carp I’m sure. When I get back it’s straight to the Everglades with Steve and Chad, where we’ll give the six a hard try.