Dave Skok encountered some flight issues on his way down for our planned fishing, and ultimately sadness prevailed: Dave was unable to come down. As we had two days of fishing with Simon and two with Ian planned, the fishing went on in his absence. I fished alone with Simon, and Kat and I each fished a day with Ian.

Here’s how the fishing with Simon went down:

Simon and I started at a reasonable 8:00, and had a run to where we wanted to start. The wind was up, as were the clouds. As such we were left to look for tails only, and it didn’t take long for us to see a splash that called us over. We were in range when the fish tailed again, and I got out of the boat for a walk. The fish didn’t tail again in the deeper water, and I tried to get into a reasonable location to wait for some more movement. Between the wind,  the clouds and the deep water I was without any indication except when the fish tailed its hardest–quite the disadvantage. I stood and waited for a minute until I saw a flush of water nearby to my right, and a blossoming slick spot on the surface from where the fish had been confirmed its departure. I waited for another minute in hopes that another fish would come through, but when it was clear that the opportunity was gone I got back in the boat. Simon poled a little farther down the bank, and soon we saw another tailing fish. I made it out of the boat again, but the fish disappeared and we continued on our way. Another ten minutes and we were after yet another tailing fish–this time, I felt as though I had a decent opportunity on a nearby tail spike but was unable to connect: the fish tracked the fly for a short distance but skittered off when it got too close. When it was clear that the conditions were going to prevent us from making anything more happen, Simon took us to new places.

We bumped around for the rest of the morning, taking our time in places that we thought should have another opportunity. We found a great shot in the late morning, along with an incidental bonefish capture to keep things interesting. The afternoon saw us return to nearby where we had seen the morning activity, and we had three fantastic shots at passing fish. The first was well placed, but the fish disagreed. The second should have worked by all accounts but didn’t–though both Simon and I were waiting to come tight on a trip when the fish darted after the fly. The third was at a pair of passing fish that had sneaked inside of our line, and this pair of fish dodged the fly as it landed too close for comfort.

As the afternoon wore on we had another shot somewhere else before Simon got the travel itch and we ran a marathon or so away to go have a look in someplace new. The afternoon never gave up another shot at a permit, though we did encounter a mullet mud with some tarpon in it as the day expired. I never was able to get the fly in front of a tarpon, though we saw enough roll to hold our attention until it was time to go in.

The second day of fishing was similar to the first, though we had more sunlight to start. Given this new advantage, Simon had us back in position for the tailers from the day prior, and we felt that the chances were good we’d find something to walk after. Unfortunately yesterday’s fish were not this day’s again, and after the clouds caught up with us we were sent packing to new water. We again found bonefish and some great looking water, though after lunch we were left without much for our efforts. Simon and I discussed what the plan should look like, and we settled on a reasonable compromise: get nearby where we had found the bulk of fish the day before, and take a hard afternoon stab at making something happen.

It didn’t take long for us to have a shot at a hard feeding pair of permit once we arrived at our destination. The cast landed in what we both felt like was a workable spot, but the fish again disagreed and blew out when the cast landed. Soon we spotted a splash nearby, and Simon pushed over to investigate. He saw the fish and called the cast, and I thought I did as well but couldn’t be sure. The cast landed a little short of the thing I thought I had seen, and Simon made the call to re-present farther left. I stripped long to shorten up the line for my next cast, and saw some movement behind the fly. On my next strip I was tight, and it was now that we realized there were two different fish involved in this shot: I had thrown at (and now hooked) the smaller of the two, and Simon had been fixated on the other larger member of the pair. We quickly fought the fish and brought him on board for some admiration: 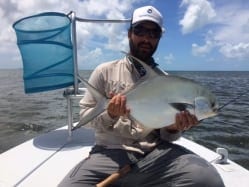 As soon as we let the fish go, another school tailed down the bank in our direction. I stripped off some line to make the cast, but sadly threw too early and landed short. As many times as I’ve learned it, the lesson of waiting until you have a shot before making the cast apparently needed to be taught another time. We were able to get a second cast into the group as they passed by, but this didn’t work and the fish were already a little skittish. We stuck with them for a while, never making our way into range for anything but a hail Mary cast I was unwilling to make. We hung around and looked for more action, but in an hour it was clear that the fish were no longer willing to play our game and we left for a final spot in the late afternoon.

As we approached the last flat, we decided that this would be a good place to get after one on foot if we should see a reason. In 20 minutes Simon had spotted said reason, and pointed out some moving black spikes to me as I hopped out. I’m not sure I’ve ever had such a great tailing shot: the fish kept flagging at they approached, and I made sure to wait until I had the right shot to make my cast. I took a check-cast to bide my time and gauge some distance, and came tight to a leaping needlefish as I stripped in. As soon as the needlefish jumped off the fish were in range, and I didn’t have time to check my leader for abrasion before taking my shot at the permit, now 60 feet away. The cast landed between two fish that were burrowing in the grass, and as I watched the fly land I couldn’t help but think there was no possible way for this not to work out. I stripped once, expecting to see one (or both) of the nearby tails shudder towards the end of my leader. Neither did, and I stripped the fly again a little faster to cause some reaction. The tails kept waving, and I figured there must have been something that was wrong: there was simply no way one of these fish didn’t see my fly. I stripped fast in preparation to throw a second time, and immediately felt resistance. For a second I thought it might be a snapper, since none of the permit had moved toward the fly, but I felt a heavier weight than a snapper and confirmed the species when I saw a black tail attached to the end of my leader. We fought the fish for a short time before landing it, when we discovered that this fish was not as big as the tailing fish I’d been watching. The permit was also hooked quiet deeply, and what we decided was that this little fish had been mixed in with the big ones, and would have been tailing if its tail was big enough. As it was, the relatively little permit must have attacked the fly early on, taking it out of the running for interest from the the larger fish nearby. Here’s how it looked: 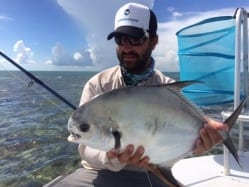 After this, Simon and I were happy to continue through the area and hope for a third. By all rights we had enjoyed great luck and were in no way pressured, but still Simon found another small group of tailing permit for us to throw at. I never got a shot at these fish, though we hung around and talked for another 45 minutes while the light got low. I took a few shots at what must have been a school of bonefish in the shallow water, and when the time was right we headed home.

I’d like to thank Simon for a great pair of days, and I can’t wait to fish with him again.

More to some soon on my day with Ian.