After fishing with Simon and Kat, I had two days set up with John O’Hearn. On the first we were joined by David Mangum and on the second David Kolhage came with us. Each day ,still feeling the burn of not being able to catch any in the March Merkin we focused on permit fishing. Despite a great day with Simon earlier in the week, John and I still had a permit-shaped hole we were trying to fill.

On the first day, David Mangum was on loan from a spring break Key West trip with his family. As David gets ample and ongoing opportunity to fish for tarpon in his home town he didn’t mind at all the plan to chase permit full time. We started in the morning, and while we found nothing straight away in wasn’t long before John pulled in to a spot and we immediately saw a school of permit that had been jarred by our arrival. The fish hung around long enough for us to throw a few casts at, but while the fish tolerated the casts landing in a decent spot we were unable to force an error. The school moved on and we continued down the flat, hoping to encounter another school to throw at. Soon another school wiggled its way onto the flat, and we were able to get a fly in front of them without too much effort. The fish once again demurred, and David got up to try his hand at the painful permit game.

David had a couple shots in the same area, and when the fishing slowed down we decided to make our way someplace new. John had a clear idea of where this might be, and when we arrived it was not immediately clear why. The place seemed devoid of permit, though John encouraged us to wait for a little longer on account of the tide. When the tide got right there came a fair number of permit on the flat, and they seemed to be in a good mood. John’s bet had paid off, and it was now up to David and myself to put our chips on the right color. We each had a few shots before moving to a shot-for-shot rotation, which we hoped would raise our angling bar high enough to get on the permit coaster. I had a fish fall in behind the fly and give a hard start, and I even felt some life on the end of the line for a brief second before losing it. David had a similar hard move at one of his presentations, and he too came tight briefly before the fly came back at him without a fish. We moved on when John decided these fish had had enough of us (or us of them, either way) and took us to a final spot to finish the day. David had two great shots at tailing fish, and one of these induced some breath holding on the skiff. The fly had landed behind the fish, though as soon as the permit heard the splash it spun around and made a hard wiggle at the fly. We watched and waited for everything to come together, but this was not to be: the fish spun away from the fly as quickly as it had approached, and we all commented on how unfair it all seemed. The day was over at the end of this flat, and we headed home.

I’d like to thank John for a great day on the water, and David for coming along. I’m sure it’s not the last time we’ll fish together.

The following day the team was the same in names only: we’d replaced David Mangum with Dave Kolhage, our awesome shop manager. Dave and I have made plans to get out on the water, and a few of them had fallen through to various conflicts over time. This time, however, we made it out onto the water and continued our hunt for permit. We basically modeled our day after the one before, though there were some key differences. We started off with a quick look for tarpon, and had three close shots before making the permit move mid-morning. At the first stop, John had a school of permit within range in an hour. I had two fish from a school bite the fly, and in my haste to come tight I pulled the hook out of harm’s way. We made our way to where we’d found the large number of fish the day before, though the fishing that had been so good had slowed down. We still, of course, had a great time and traded shots at a a fair number of unfair minded permit until John once again decided to give all parties involved a much needed respite.

At the last stop we had a group of tailing fish coming towards us, and John turned the boat for an easy shot. The fly landed out in front of the five or six permit, and within a few seconds we had a volunteer: from the back of the pack raced a compliant participant and ripped it’s tail out of the water as it ate our fly. John started the motor and we gave chase, realizing soon after that this fish was larger than we had initially suspected. David “Big P” Kolhage grabbed the fish when the time was right, and we held up our prize for John to document on digital ink: 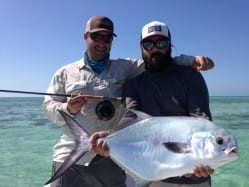 We still had time to get another one, and Dave stayed on the bow for the last hour to see if we could double down on our luck. The fish didn’t present us with an opportunity beyond a  school of fish that tailed just outside of our reach, and we headed home when the flat was done.

I’d like to thank John for the much-needed permit redemption, and both Davids for some great company and camaraderie. The fishing was great, and it was even better to catch.

Yesterday I fished with Sandy Horn as the guest of Howard Davis, and we had a great time.

I’ll upload that report before heading to the Everglades on Sunday in pursuit of the six.