Last week I fished with Simon Becker for two days. On the first I was alone, and on the second I was joined by Kathryn Vallilee.
The first day was a fun opportunity to try to exorcise some demons from the March Merkin, in which I had been unable to catch a permit in three days. We started off looking for permit, and stuck with the plan despite the tough conditions.

At our first stop, Simon found a number of permit cruising through a small flat. We had a shot at a large single over some white sand, and soon thereafter had another group of fish push through our line. We didn’t get the cast where it needed to be, partially because the fish never stayed in sight long enough to tell us where that might be, and these fish also got by us without offering a volunteer. We saw another group push towards us, and again we tried to figure out where to put the fly without success. The fishing slowed after this morning push, and while we made a hard effort we were not rewarded with any shots for the rest of the morning. Soon Simon made a run to a faraway place that he felt was a good bet in the afternoon.

When we arrived on the flat, I stripped out some line to get ready. I made a cast to strip back in, and a small barracuda grabbed the fly. Immediately, I went slack–hoping that the fish would get rid of the fly. This didn’t work, and I resigned myself to stripping in the barracuda and hoping that I wouldn’t get cut off once I put some pressure to work. The fish saw the boat and darted off, and Simon informed me that this was not a barracuda but a small bonefish. I’m always happy to be more lucky than good, and even though the fish was small and we didn’t have much effort invested in its capture we still landed and released the complimentary bonefish before turning our attention to a more invested effort.

We saw a few more bonefish before we began looking for permit, and as soon as we did we found one. A large single was cruising down the edge, and we tried to get the cast in front of it but were foiled by the right-hand crosswind. I reset the line and reminded myself to aim right next time. Next time happened right quick, as we spotted a pair of fish mudding in the current. I put a cast in the wrong place and quickly replaced it as best I could. One of the fish made a start toward the fly and kicked hard on the strip, and soon we were tight to a permit we thought was about 12 pounds. 20 minutes later we were still connected to the fish but our estimates had grown: we were now sure this fish was over 20. In a few more minutes Simon had the fish in the net and I held it up for pictures. We weighed the permit at 25 pounds before letting it go:

After that capture, we were in great spirits. The good feelings continued as we pushed down the bank and saw a group of three smaller fish mudding away in the current. I made a cast at the far end of the three and came tight right away. After I cleared the line I saw another fish tailing on the bank, and in a greedy moment wondered to Simon out loud how he might be able to get a cast off to the fish without putting our already hooked fish in jeopardy. He informed me that this wouldn’t happen as I thought it would, and we staked off the boat to fight the bird in hand. In a few minutes we had the fish in the net, our second for the day: 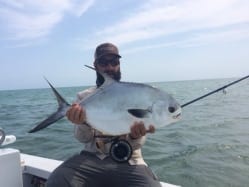 Following this flurry of permit activity we had another shot at a pair of tailing fish that were on to us too soon. These fish didn’t give us a third for the day, and when the light got low we headed home.

The following day, Kat joined us for a day we hoped might include another permit. The day resembled the one prior, and we stuck with the plan that had yielded some great results the day before. We looked for permit and found none save for a single tailing fish nearby where we’d make our previous mark. We continued to look for them until we decided we’d had enough of the snub-nosed snubbing, and decided to make a run in search of a tarpon in the late afternoon.

Kat had a great shot at a large tarpon when she was up, and even though the fish fell in hard behind the fly it lacked commitment to the cause.  She graciously passed the bow to me for the last of the day, and in that time we had a three decent shots at fish that wanted nothing to do with our efforts. When the light expired we headed home.

As always it was great to fish with Simon, and I’m happy that we were able to kick off our days this season with a couple permit on the deck.

The next report will be from the two days I fished with John O’Hearn, the first of which we were joined by David Mangum and the second of which saw David Kolhage (our main man in the shop) grace us with his presence.