Over the past month or so I’ve been able to get out a few times, though not with the typical regularity. Still, there have been some fun times out there that are worth sharing. The first is a fish from a few weeks ago, fishing with Ian Slater. We’ve been using the lack of permit tournaments in my life as a chance to work on some new flies without fear of failure, and while we might have caught more fish if we’d stuck with what we know it was fun to get one on something new for everyone involved: 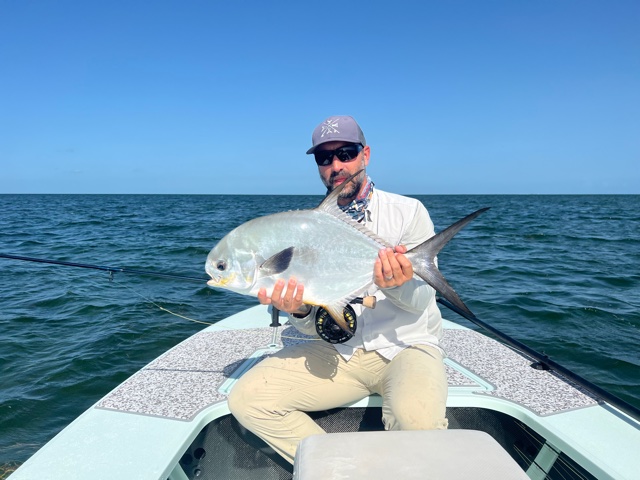 Recently I also had the chance to fish with John O’Hearn, and we were joined by special guest Carl Hiaasen. Some readership of these pages might be aware of Carl and Tim Klein’s dominance in the bonefish tournaments in Islamorada, where they won the Fall Fly bonefish tournament five times. As such John and I were interested in seeing this savagery in action, and we were unsurprised when we watched Carl catch an unknown number of fish in the morning. I caught some too, and thereafter had the chance to throw some 4# at permit, ever-hopeful that one of these days we were going to connect with a fish that would make the cut (24 pounds, caught by Del Brown and Steve Huff, is the current record we are looking to best). Our fishing was less than perfect, with some high water and fish that refused to show themselves as much as we would have preferred, though I was able to hook one that fell off as soon as we cleared the running line to the reel. While a part of light line fishing, this one stung especially since a permit would have moved this day into the beginning stages of epic after the morning we had just enjoyed. Within a few minutes we had another chance, and while the running line caught on some grass as it dragged behind me it was cleared just in time to get the hook set on the fish that seemed to be committed to committing a mistake.

This fish stayed on, and after I got back in the boat things calmed down and we were in the best part of fishing with 4-pound other than catching the world record: battling an otherwise ordinary sized fish just for fun, working against our own self-imposed limits to accomplish something for no reason other than the challenge–familiar stuff, if you’re into fly fishing to begin with. Within 15 minutes we had the fish next to the boat, and Carl was forced/goaded to grab it. He landed the fish and were elated: officially, this day was approaching incredible: 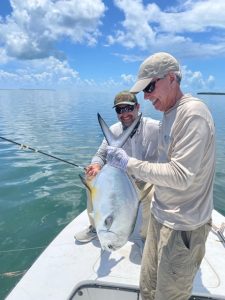 The afternoon slowed, though just before we were about to call it a day John had an idea to find us a tarpon to complete a slam. I opted to throw a fly tied by his youngest son, Johnny, and after a few missed bites we had a decent size fish on, chasing as if we were in the Hawley to get the leader release for the official release. The fish wore through just before we could get the fly back, though with the leader in the rod tip prior Johnny’s fly had still done its work for us and secured us a tarpon to complete our slam.
This day of fishing was as near to perfect as could be, and I’d like to thank John and Carl for two great days that I will remember for a long time.

I’ve got Tuesday booked with Ian, then in September David Mangum is coming down on his annual permit trip down here. More to come,