Earlier in the week I fished with Ian Slater, and while we got a late start we still gave it our all towards having some fun in the off season. We’ve been kicking around the idea of getting back into the tarpon record game, and as the only two records remaining that are more possible (or less impossible) than the others are the 2- and 8-pound (sitting at 32 and 127 pounds, respectively) we elected to throw the former. Readership of these pages will recall the years-long effort John O’Hearn and others spent with me in pursuit of the 2lb permit record, and while I was more than happy to leave behind the work with that tippet when we were finished with that record I’m finding a need to jump back in and enjoying the process of the early stages of a record hunt.
We bumped around for most of the day in search of a tarpon to hook on 2, finding only a small number of shots at fish that didn’t work our before we changed gears and looked for a permit just for fun. We found two shots worth that never worked out, and then called it a day.
Despite the fact that we didn’t connect to a tarpon on 2, I look forward to putting in more time with Ian on this pursuit and getting back in to the tarpon record game after a 2-year absence following the completion of the 6.

In other world record news, I’m happy to report that Kat Vallilee and Brandon Cyr have recently caught the pending women’s 8lb tippet world record permit, having successfully landed a 26.5-pound fish just two days ago, on Kat’s birthday. This catch is representative of an angler and guide that have been working hard both on and off the water, and while many anglers (and guides) claim fish in the high-20’s and into the 30’s in conversation, there is a real difference between calling out the weight of a fish that one didn’t weigh and actually weighing it on a certified scale. This fish potentially replaces a 19-pound fish caught 17 years ago, and even if their tippet overtests it will still replace the 12# record, a 24-pound fish caught one year earlier. Of course I’m biased, as the husband of the angler and close friend of the guide, but my hat is off to them both for an accomplishment that’s unlikely to be bested in the near future. Here’s a picture of the fish, which was weighed on a flat and then released to fight again after a 20-minute fight: 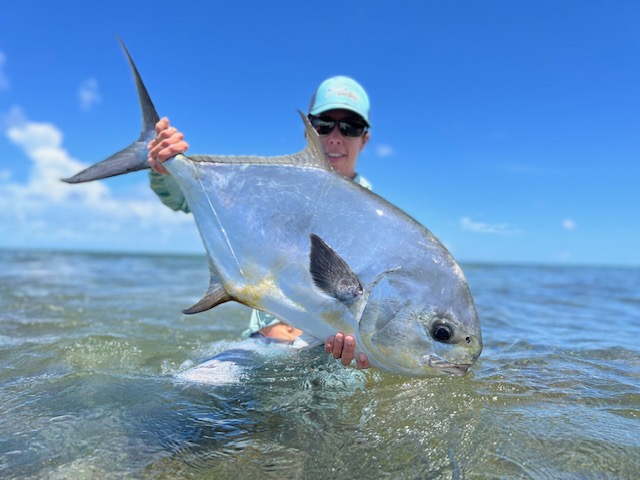 That’s it for now. Next week David Mangum comes to town and I will likely be throwing 4 in pursuit of catching a fish like the one Kat and Brandon did. More to come as always,