Over the last month, I’ve been able to get out a fair amount. After the IGFA Permit Invitational wrapped up we were struck harder than anticipated by Hurricane Ian, which as everyone knows also hit the Fort Myers area much more severely. The consequence of the storm for us here was mild on a personal level, though the effect on the fishing was certainly more pronounced than we wanted it to be. Brandon Cyr and I were again fishing in the Fall Fly Bonefish Tournament, hoping to overcome the burn of a close second place last year. Unfortunately, the areas we knew usually held fish that made the stick for a small weight had been wiped clean, and without that crutch to lean on we were left to catch as many as we could and hope that one or two would measure out. In the end we were not able to break the magic mark, though on the last fish of the second day we came close. After a bite seconds before lines out, a larger fish gave a good account of itself. We fought it slow, becoming more convinced as the fish got close that it was a contender for weight fish status. We landed the fish a few minutes after lines out, and when we put it on the board it came up a quarter-inch shy. Painful stuff, but understandable given our strategy of picking away at a large number of smaller fish hoping for a larger one. Other than that we had a few that were not as near, and in the end were unable to post a weight fish in order to unlock any of our release points. The winners were Eli Whidden and Robbie Binder, who posted an 8lb 14oz weight in addition to their 4 releases, and runners up were Bobby Gibson and my friend Rich Garcia, who had more releases but a smaller weight than the winners. Brandon and I took most releases with 27, and we are both looking forward to giving it another shot next year without a hurricane wiping our research area clean the week before.
In fishing for other things, I’ve been getting out after permit for the first time this year, and while I’m taking some time off from the tournament scene John and I are getting a chance to commit time to something we’ve been after for a while now: the four pound permit record. This particular record was, for us, our introduction to light line fishing. Years ago we discussed the topic of light line records, rigged up some four, and John and I spent a day trying to figure out if it was something we might be able to do. In the years that followed, the four moved to the back burner: at 24 pounds, the fish that Del Brown caught with Steve Huff in 1992 is a rare animal these days. We caught a half-dozen fish, the largest 20 pounds, on this tippet before changing to 2-pound thinking it might be easier to find a 10 pound fish than a 25. I’m not sure it was, however, and when we finally did break that record after 3 years of trying it occurred to me that the four might have fallen sooner given the same amount of effort. So John and I have become reacquainted with an old flame, and in the last month we’ve been getting out near weekly in pursuit of it. It’s been fun, but beyond that has been satisfying to be back doing something that feeds whatever dog it is that wants to be throwing light line at permit. Another benefit of this recent reunion has been the chance to spend some time in the water with the third man required for record fishing–so far we’ve been joined by Zach Stells, Brandon Cyr, Scott Collins, and Ian Slater. Upcoming we have a day with Brian Stilley, as well as more time planned in November for a repeat or new guest to come along. Our time with this crew of captains has been perhaps the best part so far, and as an angler it’s a great thing to listen in when John O’Hearn and any of the aforementioned talents are talking about fishing and approaches to guiding.
As far as the fishing itself, it’s been hard. We haven’t had a large number of permit around for a few months it seems, though we have been able to make some fishing happen despite the above average difficulty. I hooked a fish with John and David Mangum, which broke off thanks to a too-interested needlefish, and caught one with Ian and John last week that was shy of the record. While clearly not a record when we saw it, prior to seeing it as we gave chase we weren’t sure of its size, and for a few tense moments we were wondering if this could be the fish we were after to break the record. We fought the fish fast, releasing it after a 10-minute fight, and kept at it hoping to get another chance at a larger fish. We didn’t, but we will get more days toward this pursuit in the next few months before season is back upon us.
Here’s a picture of the one we caught together the last day we went–not a record, but still fun on four: 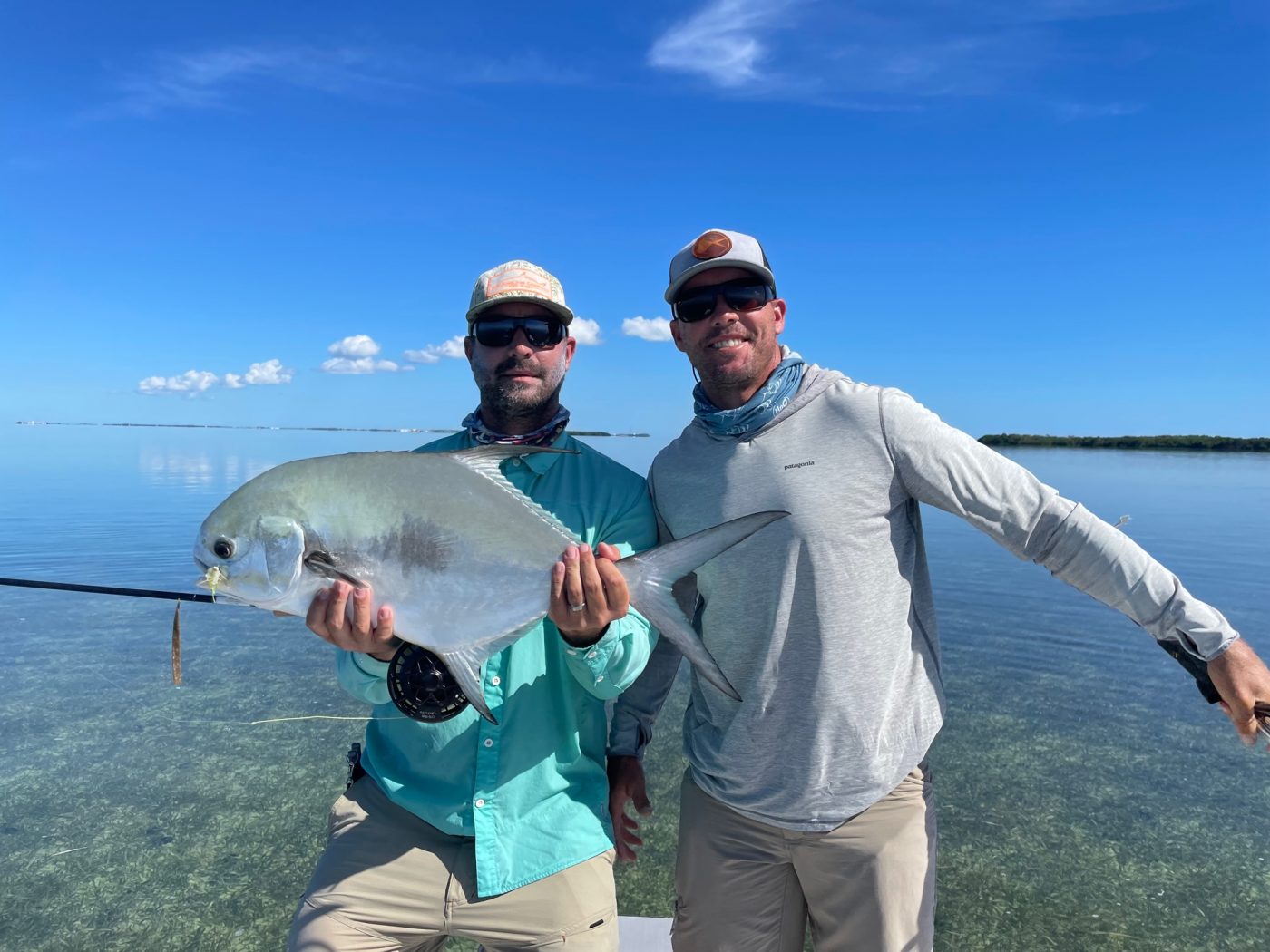