After the Cuda Bowl I was ready to spend some time on the bow. I’d spent plenty of time fishing of course on the recent trip to the overseas, though as is currently being proven by some recent itinerant arrivals in our midst trout are a very different creature than what we’re after here. I set up a day with Ian Slater to get the boat up and running, and we were sadly plagued by poor weather. We had a few shots at permit in the morning, but our most productive fishing was for barracuda in the afternoon. In an hour we had three to the boat for an average of about 40 inches, and when we filled our theoretical score card we lost interest in barracuda and continued looking for permit.

Ian had a shot at a single fish that spun back towards the fly after spooking away from the impact, and I thought briefly that the fish was going to make a mistake. It didn’t and instead stiffly made for the nearby channel. We continued looking for more fish, finding a shot for me at a pair of large tailing fish. I tried to make things work but couldn’t, and when the water got too high we moved on. We had a hard time finding fish until the end of the day, when we were able to produce three decent wading shots at fish that looked happy and ready to play. One of them tracked the fly hard, losing it in the grass before I could make things happen. We finished the day on the terms of the fish, never bending them toward what we wanted.

Brandon Cyr and I also snuck out for a day after the day with Ian, and we experienced the fishless futility that heavy wind and thick clouds can force on even a focused effort. We worked hard all day for the three low-quality shots that we got, and while it was frustrating we kept our heads in the game until the very end. As much as I’d love to report that every day has something worth repeating within it, sometimes I’m just as happy with the effort as I am that it’s over.

After this day I fished with Nick Labadie. I’ve been friends with Nick for a while now, and after spending a day fishing with him and Brandon Cyr before their victory in the Sugarloaf Showdown and a day fishing/environmental-heroing during the LKGA cleanup in November it was time for us to go out and do some regular fly fishing. The weather was solid, and Nick took care of his fish finding duties to great effect throughout. We had a few shots at a place that he started us in, and as the fishing heated up he staked us out so we could keep things under control in the wind. I waded at a large group of fish that approached on our right side and was unable to make a connection despite some interest from its members. After getting back into the boat we spotted another large single coming from the other direction and it didn’t take long for me to get out and extend our reach on the other side. The fish gave me a perfect first opportunity, which I like to think I took advantage of, but the fish was unconvinced and after an inspecting the fly decided it wasn’t going to play and swerved its way across the current. I threw a second cast at the permit in hopes of getting a different response, and while I didn’t get the fly to where  I wanted it another smaller permit popped up from near the large one and showed itself. This changed things substantially; what had been a fading opportunity was refreshed, and when I threw at the pair again the newly noticed one climbed in behind the fly. This fish volunteered fully on the second strip, and after coming tight I headed back to the boat to give chase. Nick started the motor and we soon grabbed a fish, my first of 2019. Here’s the evidence: 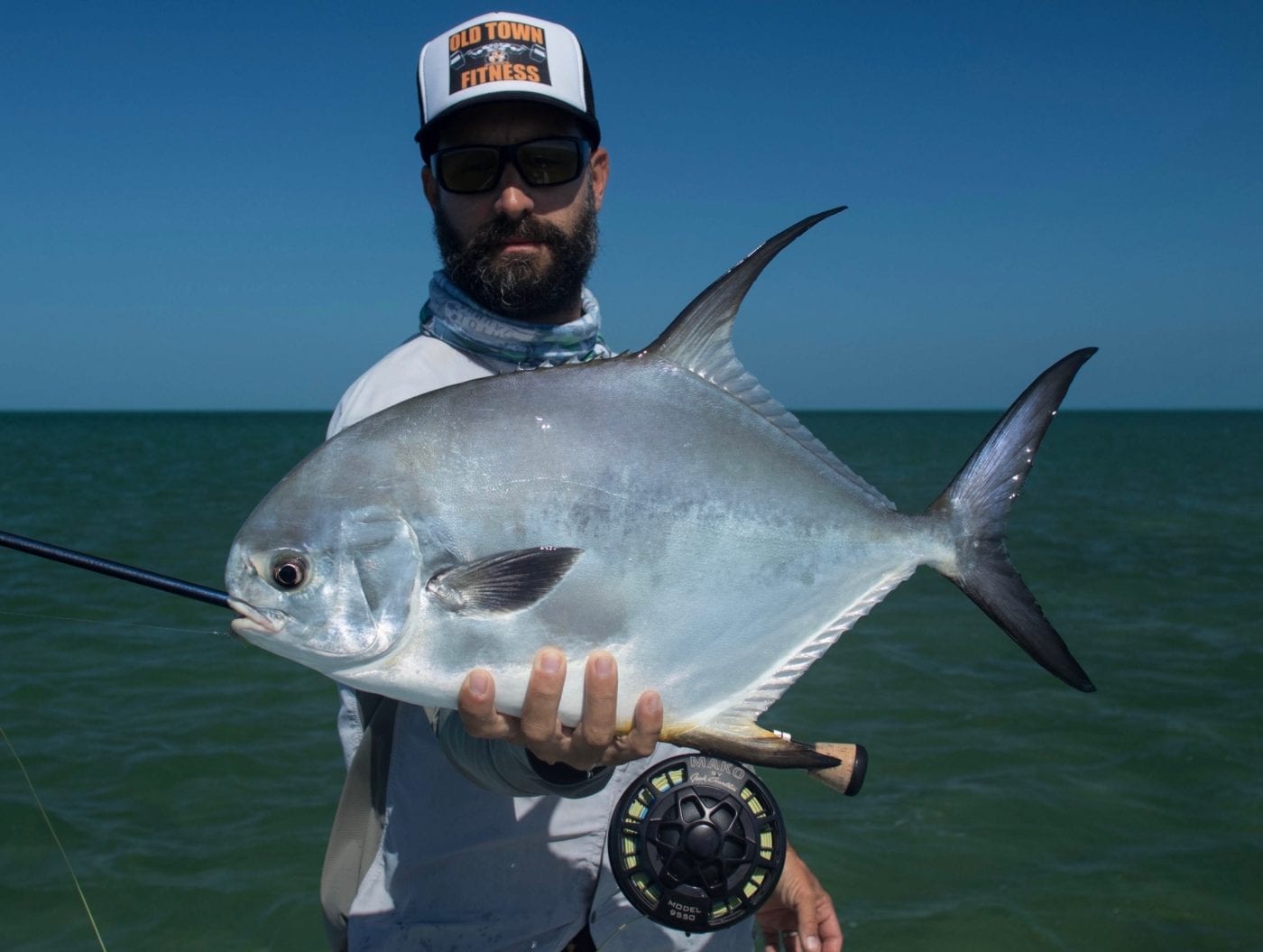 After this fish we continued to have shots. Nick did a great job of finding fish throughout the day but another bite eluded us: when the fish were right the casts were not, and in another instance the boat was drifting away from the fish as they approached. Nick was hard on himself for what was a forgivable error, and I could tell by his demeanor that he was plotting to not have it happen again. At the end of the afternoon Nick made a play on a place that he knew would hold a fish eventually, and to pass the time I caught a barracuda. We waited through some idle time while Nick openly discussed his doubt, the ever present elsewhere grass growing greener by the minute. Finally a permit approached and Nick spotted it first, and this shot unfolded in a way that gave him every opportunity to either repeat or rise above the prior shot’s difficulty. The fish tacked across the current and Nick tightened the gap, and even as the fish blinked in and out of view it was apparent that it was headed for a destination that put it perfectly in the way of our shot. The cast got there just before the fish did, and when the permit noticed the fly everything happened as it was supposed to. We got tight and buried the hook before the fish took to a nearby channel, and after a short fight we had our second on board for the day: 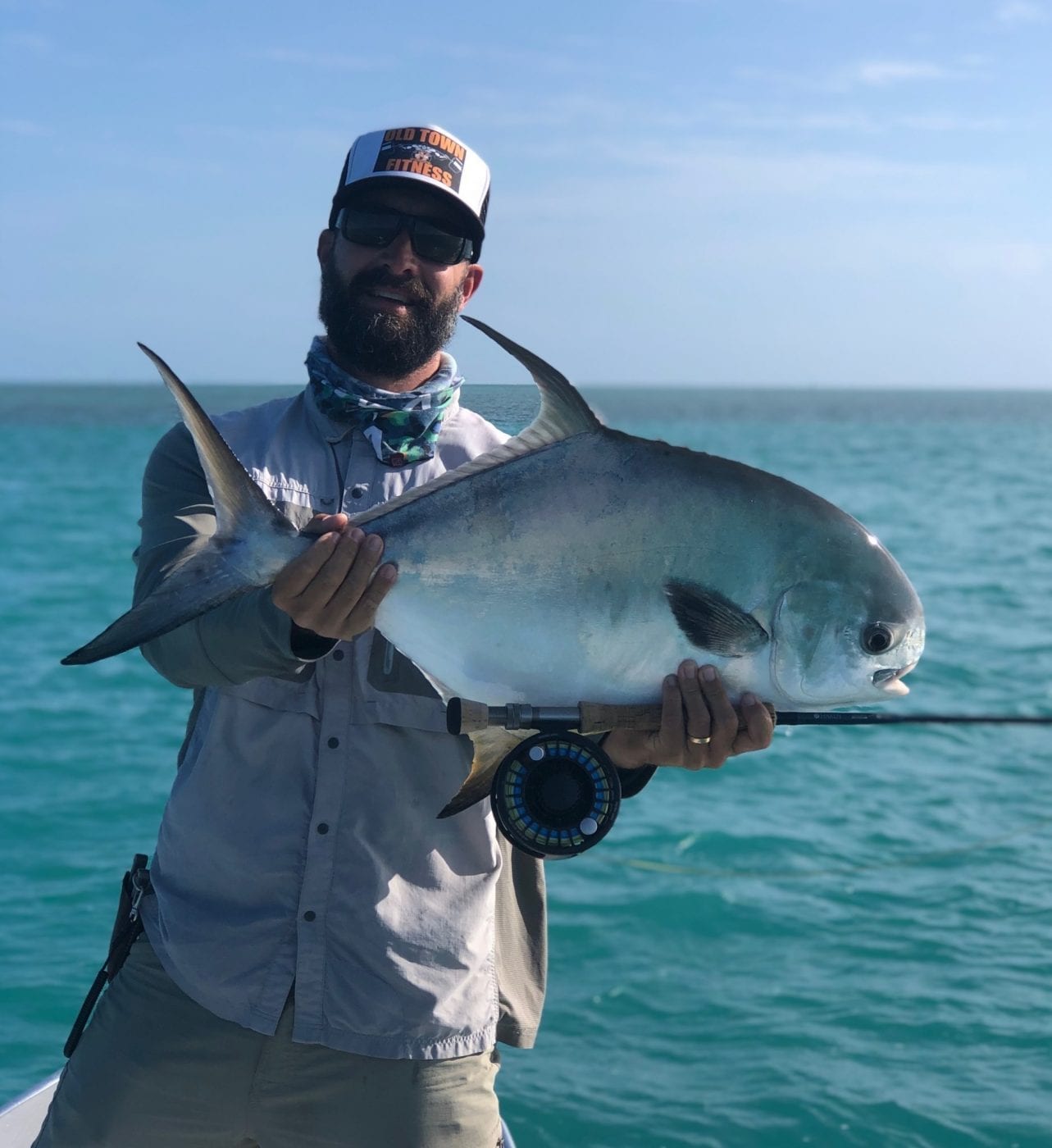 I’d like to thank Nick Labadie for a great day on the water, and I look foward to more. The Merkin starts Tuesday, though I have a lot of fishing to catch up on here. My goal is to upload the reports in the next few days so we’re current going in to the tournament.