So continues my quest to get these pages current leading up to the March Merkin, which begins on Tuesday. The weather has been phenomenal, and I’ve lost myself in the fishing more than writing lately. I’m full of days on the water, most of which have ended with a few fish in the boat. I’ve got two trips to cover here, and both of them involve celebrity fly fishing guests.

The first trip was with Simon Becker, and we were joined by tarpon guide (and recent internet-breaking-Yeti-promo) extraordinaire David Mangum. David is a great friend, as well as someone that I hold in the highest regard as a fisherman. As many people already know, Simon is one of the greats in his own right, and a day on the water with people as talented and well-fished as these two is something I felt lucky to be a part of. David and I traded shots throughout the day, and from the first flat we were in a steady supply of A-grade shots thanks to Simon. We found a half dozen opportunites, and on each of these we had some expectation that we were going to engage with the lips. Sadly, our morning expired without the conviction we had hoped for. A fly change to one of Dave Skok’s newer inventions happened at a new spot, and on the first cast David lined up a fine piece of geometric trappery for the fish to fall in to. Everything happened in the future he’d imagined when the fish tailed down on the fly, and after a hook set David was fighting a permit. It didn’t take long for him to land the animal, and afterwards we took some pictures with the fancy photo box he’d brought: 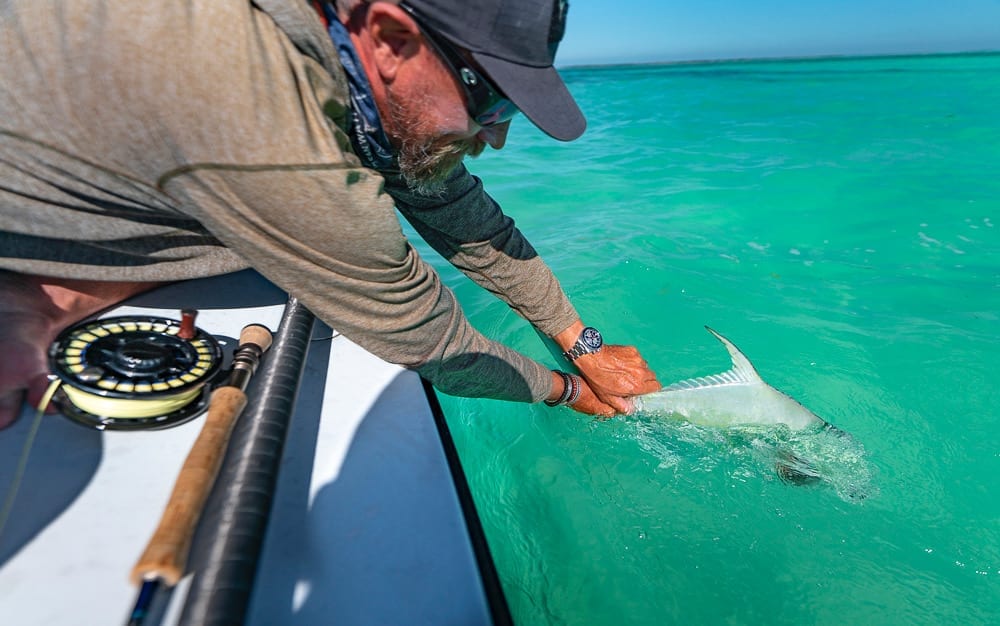 I was up next, and after having a good shot that didn’t work out found myself on a flat in the failing light waiting for a fish to come our way. David spotted one close to the boat, and a flop cast from me got near enough where it needed to be that I left it in play. The fish burrowed after the fly and I did nothing, though when it spooked from the boat carried the leader with it. I tightened up to set the hook and cleared the line, and once the fish was on the reel Simon fired up the motor and we gave chase. This fish gave a good account of itself, largely due to its size, and after 20 minutes we netted the beast. David took some pictures: 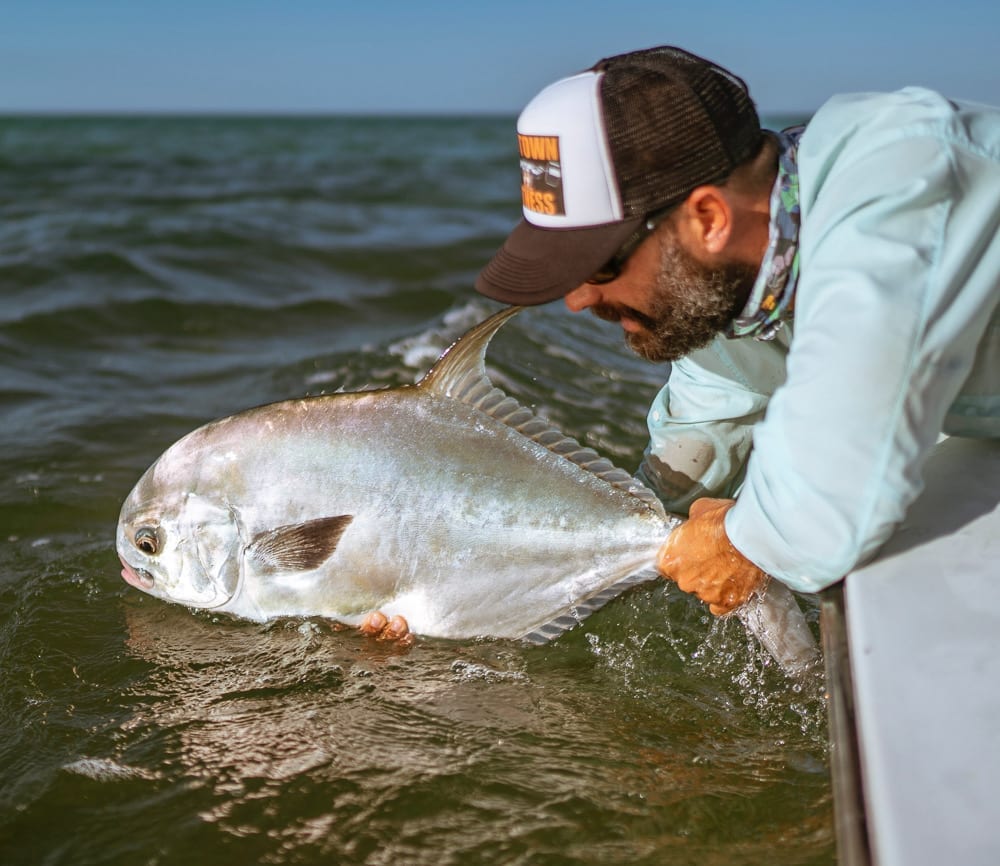 I know I’m running through these days quickly, but I do want to mention again how great it was to fish with Simon and David. For me, the people are as much a part of this fishery as the fish themselves and these two guys made the fishing even better.

After this day I fished a day with John O’Hearn, and we were joined by Joe Skrumbellos. Joe should need no introduction, though if you don’t know him I’ll give you the brief bio: he saves lives and catches permit and wins tournaments. Pretty straight forward. John and I fished with him for a day, the first of two we had booked. It didn’t take long for Joe to get tight to a big one on his second shot, and I got to sit back and watch a great guy do great stuff. John soon netted the beast, and I got a picture for the pages: 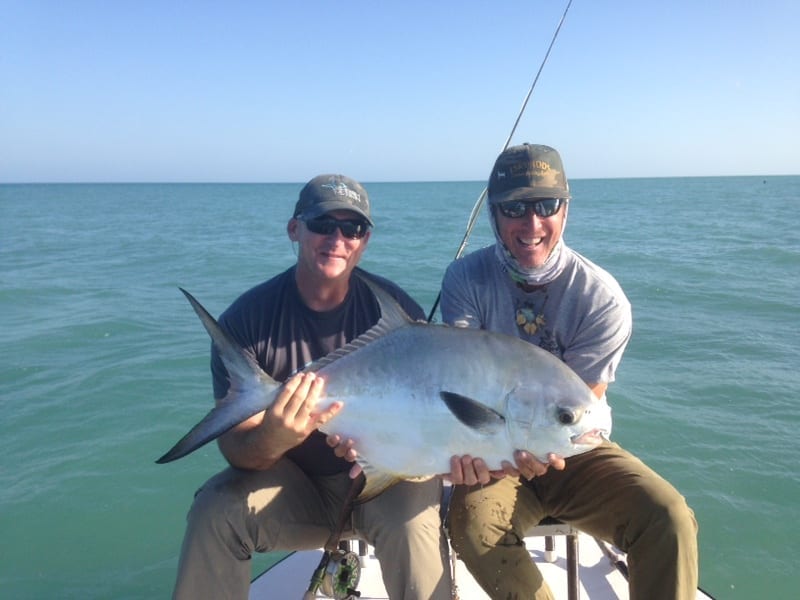 I was up after Joe, and since I had double badassery on the boat I figured now would be as good a time as any to throw some four pound. We recently found out that our 2-pound record from August was approved, and with that momentum decided to throw some double strength line for fun. The fish we need is a big one, over 24 pounds, so unlike the 2 lb game we are statistically unlikely to hook one of sufficient size to qualify. The flip side to this is that a permit is more than 100% easier to land on 4 than on 2, so we have a chance of catching a few along the way. I had a bite from the fish on four that didn’t stay connected (sadly, the years of throwing 2 pound have done damage to my 4 pound hook set), but we kept on and had a few shots throughout the day to keep us occupied. In the early afternoon I had a shot at a fish that appeared to eat the fly, though I never felt any tension. The fish swam away and I threw a longer cast over its back, hoping for lightning to strike. It did, and the fish spun around and ate the fly on its way toward a nearby channel. I set the hook hard this time, getting the hook in its home before I went on the defensive with the frail line. We followed the fish around for a while, chasing it and putting what pressure on it we could, and after 20 minutes Joe deftly got the net around the fish. John snapped the picture with Joe and I and the best part of fishing with a fly rod–a permit dumb enough to play a game engineered by a small group of obsessed crab puppeteers: 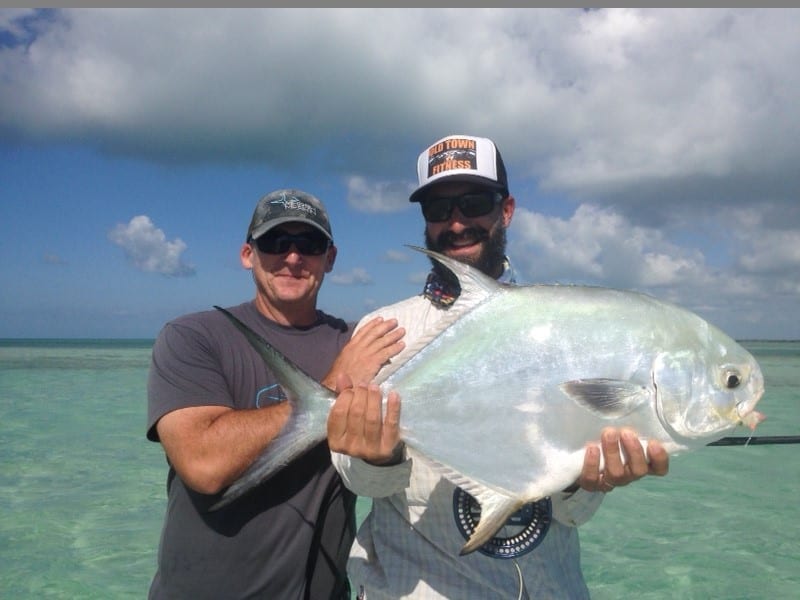 The day after this I fished solo with John, and our fishing was not great. The wind had shifted and the clouds had moved in, though we practiced what we’ve learned to do a lot over the last years: keep it 100, run the play-by-play, and have fun. We had a single fish do some serious chatting with the fly but another bite eluded us and we went home when the light got low.

I’d like to thank all of the above guests and guides for some fantastic days on the water, and there’s a pair of days with John boy and another with Ian Slater and Brian Stilley to get through before I’m current. That report will get up tomorrow and I’ll be present going in to the March Merkin.