In the middle of last week I traveled again to Everglades City in pursuit of the 6 with Steve Huff. Chad came along to assist with the last 8 feet if needed, and together we formed a team of children poorly disguised as fisherman. On the Sunday leading up to our scheduled days a wicked wind had blown through, but we figured that after a few days of calm the fish might slip back in to a few places Steve could get us into. We took a day off on the front side of our scheduled three days to give extra time for the requisite restoration and set out on Wednesday for the first of two days with the thin string.

Our first day started off with low expectations, but clear skies and light winds grew our optimism into anticipation. The air still retained a distant chill in the morning, but we made the run to where we thought there would be a tarpon and set out to have a look. In an hour we had found nothing, though the water was warming up and we were still sure we’d come across a tarpon to throw at. Before lunch we found our way into a small basin, where Steve was hoping we would find some laid up fish. As we poled along I noticed two fish, laying next to one another in the calm. We didn’t have time to make anything happen with these two animals concealed by the glare, but after they spooked off the boat we were sure that we would find something to throw at nearby. We stuck with the spot for an hour or so, even returning to where we had seen the earlier pair in search of a rematch. Finding nothing, we moved along our way and had a sandwich as we discussed where to go next.

We stuck with the tarpon fishing as the afternoon wore on, returning to where we had started the morning. Still seeing nothing, we pushed along a shoreline and kept our eyes on the glassy surface for any sign of a lurking dragon. The shoreline got cast to, and Chad took a few tosses with the bait caster as we fell easily into some searching for snook. I held on to the six pound rod and just threw the tarpon fly, unable to give up the ghost completely. I hooked and landed a small one, and after 30 minutes of casting came tight to a decent animal. The fish gave a good account of itself on the light line, and we barely got it out of the roots before it found safety in the maze. I held up the fish for a picture (I know, finally a fish pic from fishing with Steve!): 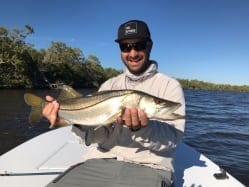 We kept after the snook, even changing to a proper 8 weight with 12 pound to finish out the spot. I caught another couple fish smaller than the one on 6, and Chad tossed the bait caster at the shoreline in hopes of his own tight. We bumped around for the rest of the afternoon, fishing shorelines adjacent to where a tarpon might roll, never seeing one but keeping our eyes out in the event that we would be called back to task. I had a large snook bite my fly, and when it broke off immediately we discovered the class tippet had been chewed through: this fish was big enough to get all 12 inches of leader into its throat before I could set the hook. We fished hard until the sun set, and headed back to the house to rest up before the next day.

Our second day of fishing started out cloudy but began to clear by the time we arrived where Steve had in mind. The wind exhausted into a soft draft, and we were again left feeling as if a tarpon had to show up. In the first half hour of fishing we spotted a large tarpon sliding up the shoreline, and even though we missed a proper shot at the fish we now had proof of concept. We stuck around for another hour, looking for fish that never came before looking elsewhere for more of the same.

As the day wore on we made the best of a slow realization that we were not in the presence of what we’d hoped. Steve stuck diligently with the plan until it became clear that our future was tighter to the trees, and we repeated the plan from the day prior. As the afternoon set in we were looking for snook, keeping a watchful eye in the deeper water nearby for any sign of a fight worth picking. I caught a seatrout, which Chad photographed: 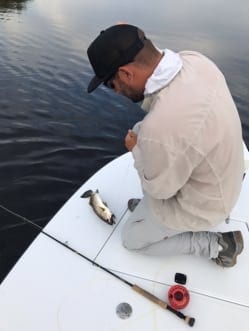 Our afternoon was actually great fun, and it was nice after the hard trip in December to just toss some flies with the boys and relax. We released a few small snook, and Chad had a bite from a very large one that dropped the hooks after the hook set. We fished until the sun quit, and settled in for a long ride home.

I once again can’t say perfectly what a pleasure it was to fish with Steve, and how much I can’t wait to get tied to a fish we finally catch on six pound. I’ll be up there again in March, and Chad will again be joining us for gaffing duties.

The Cuda Bowl is this weekend upcoming, and Kat will be fishing with John Benvenuto and me. We have plans to have fun and catch some barracuda, which I think the weather should allow.