I’m well aware that since I returned from New Zealand these reports have suffered. In an attempt to start with the ongoing updates, I’m going to give a quick rundown of what’s been going on since New Zealand, then a more in-depth report of fishing with Steve and Chad Huff in the next day or two.

The day after I got back from New Zealand I went out with Ian Slater in an attempt to meet the jet lag in the parking lot before class started. The weather had become volatile before we got back stateside, and this was the nicest of the then-recent days. We hoped that we might find a permit but started off with the wolf gear to pass the time before the sun got up. We found a large fish on some white sand, which forced us to pull out all the stops. The fish finally ate when everything was just so, and we got ahold to a large fish in the mid-40-inch range shortly. I attempted to hold the fish up for some photos, though gravity prevailed when I fumbled the fish into the water. Ordinarily an opportunity so squandered would mean the prevalence of sadness, but we were buoyed by the ease with which we’d caught the fish and figured it wouldn’t be long until we had another model on deck. Our optimism gave way to reality when we spent two hours throwing at some large barracuda nearby that wanted nothing to do with our advances.

We soon left the barracuda and took a look for permit. Our optimism was again deflated by the realization that it simply wasn’t warm enough to make this happen, though we kept at it and dug our heels in. We finished the day with only the slippery cuda to (not) show for it, and made plans to fish again the following week.

The next week (last week from the day I write this) Ian and I again went out. We were joined, awesomely, by Captain Scott Collins. Scott made the drive to Key West in the morning, and we set out in search of barracuda and permit. Ian found us plenty of both in the morning, and we bounced back and forth between a crab and a needlefish on our leaders and kept things light. It’s always great to fish with Scott; even more so when the stakes are low and we’re just having fun. We threw at some giant permit in some deeper water, a few leaning in our direction but never a volunteer. Ian had us near a few shots that would have been very high quality if the light had been better, and when we spotted a small group of large mudding bonefish we quickly got the fly in play for a bite. I caught the nicest bonefish I’ve caught in a while, a stout 5 pounder that gave a great account of himself on the way to the boat. We finished the day with some giant barracuda that were insolent on white sand and headed in when the light was low. Ian did a great job of finding us some good opportunities, and it was great as always to spend some time with Scott Collins.

After the day with Ian and Scott I joined Michael Hetzel who had booked John O’Hearn for a few days. The fishing started out with Michael catching a decent tarpon, and then we spent the balance of the day in search of permit and barracuda. Michael had a number of barracuda shots over some white sand (you’ll notice the pattern here: barracuda on white sand display insubordinate tendencies) and we had a permit shot in between the teeth. John spotted two large permit on a coral head that gave us a low quality shot, and we soon moved elsewhere to look for new targets. John brought us to a barracuda place in the early afternoon, and when we spotted a few bonefish we threw their way to pass the time. The little bonefish refused to comply, and we soon left them in search of the large barracuda that were beginning to populate the lighter patches nearby. Once the light got low and the fish continued to push in against the tide it became apparent that our future resided with the giant barracuda that were funneling in to the white sand land of maybe-but-probably-not.

In two hours we had some of the most frustrating but rewarding barracuda fishing an angler could ask for. After putting together our program at the expense of a dozen shots, a 50-foot lead and a slow start to the system gave up a bite from this fish–a 47 incher that was the smallest of the three we’d thrown at: 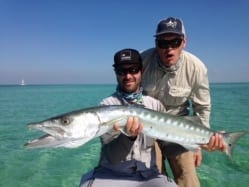 Michael soon forced a bite from a bigger fish but didn’t stay connected, and we had one more hard follow from one bigger still that bailed out at the last moment. We left and headed home in the failing light, enjoying the fact that at least one of these fish came up for a visit.

With that I’m current until fishing with Steve Huff, from which I returned late last night. We didn’t touch a six pound target, but had a great time. I’ve got some pictures and a more in-depth report to post about that, but it will likely have to wait until after I get back from the IGFA auction tomorrow night.

Next weekend is the Cuda Bowl, and Kat and I will be sharing bow time fishing with John Benvenuto.
Nathaniel