Four days after the Cuda Bowl, during the time I was slated to be in the Everglades with Steve and Chad that had been rescheduled due to weather, Ian and I went out for a day of fun fishing. It’s rare this time of year that he and I have coinciding days off, but we were both without prior commitments and decided to get out on the water and see what we could do. The weather was chilly after the front that came through on the last day of the tournament, and since any permit fishing we were going to do would be in the latter part of the day we started off by barracuda fishing. There may have been some repressed blood lust on the boat after the tournament, but in short order we set that right. What followed was four hours of the most incredible barracuda fishing I’ve ever seen. We didn’t catch one over the magical 50-inch mark, a milestone I’ve reached but once with Doug Kilpatrick, but of the six we landed over 40 inches one was a clean 48: 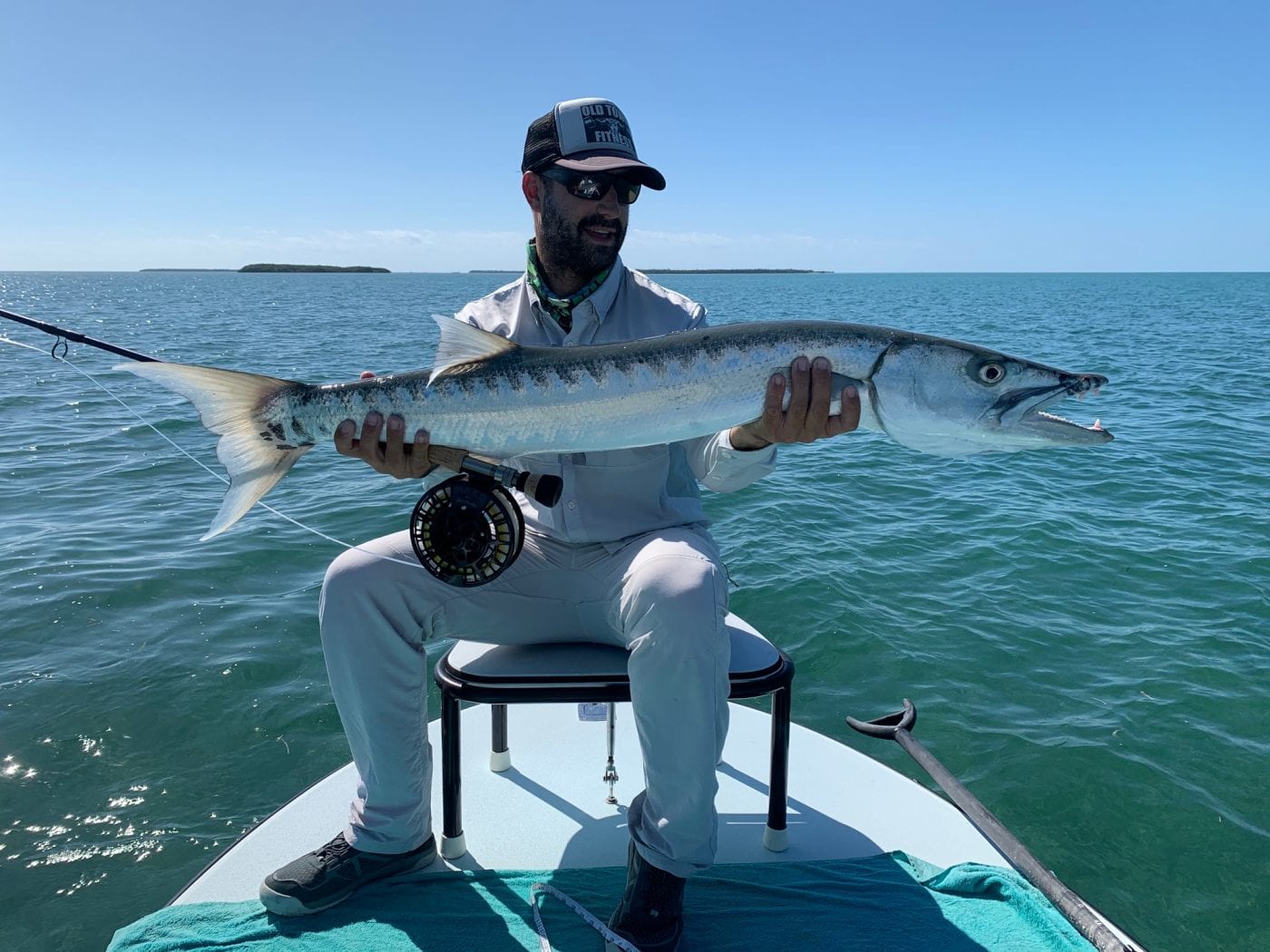 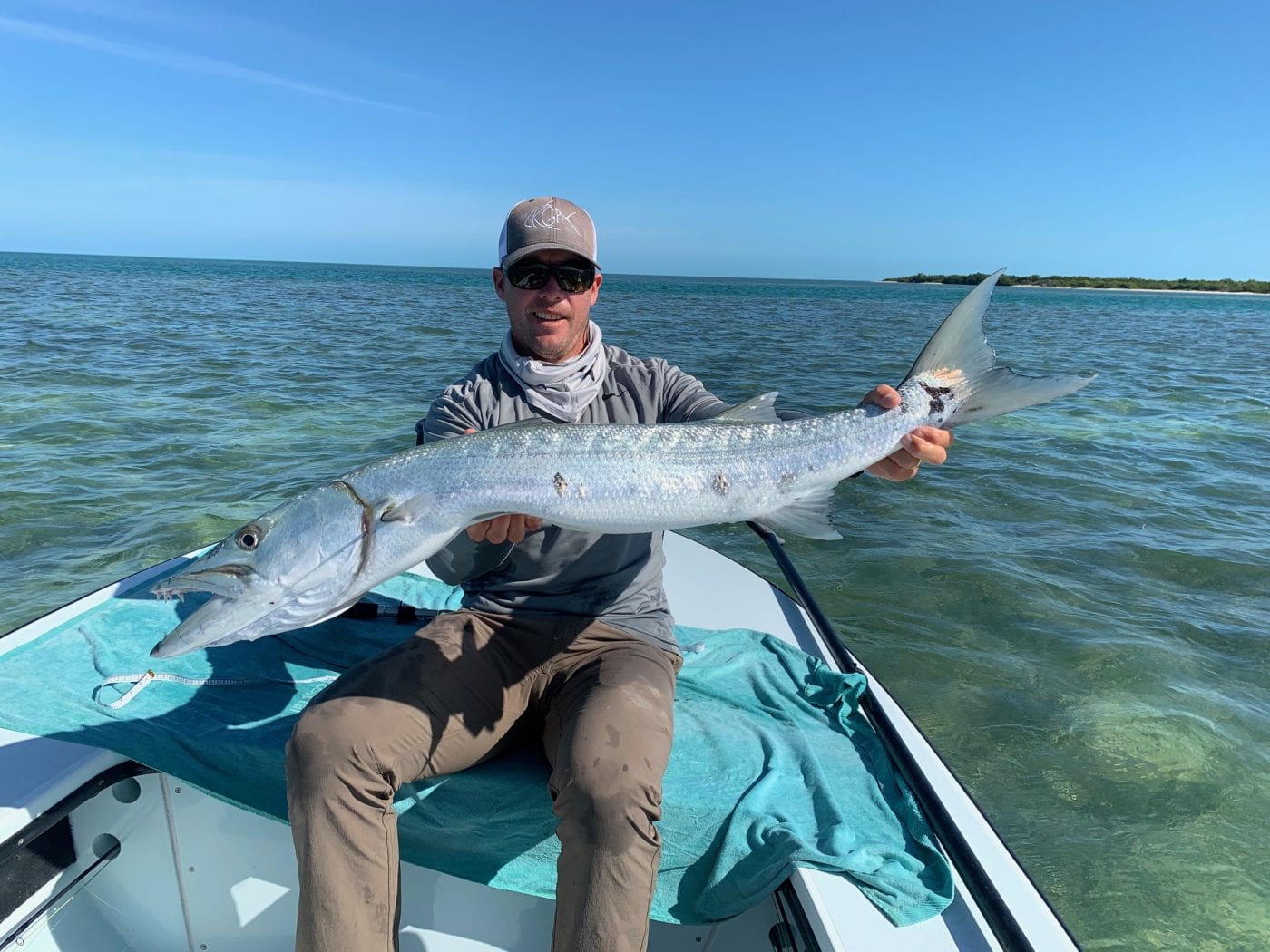 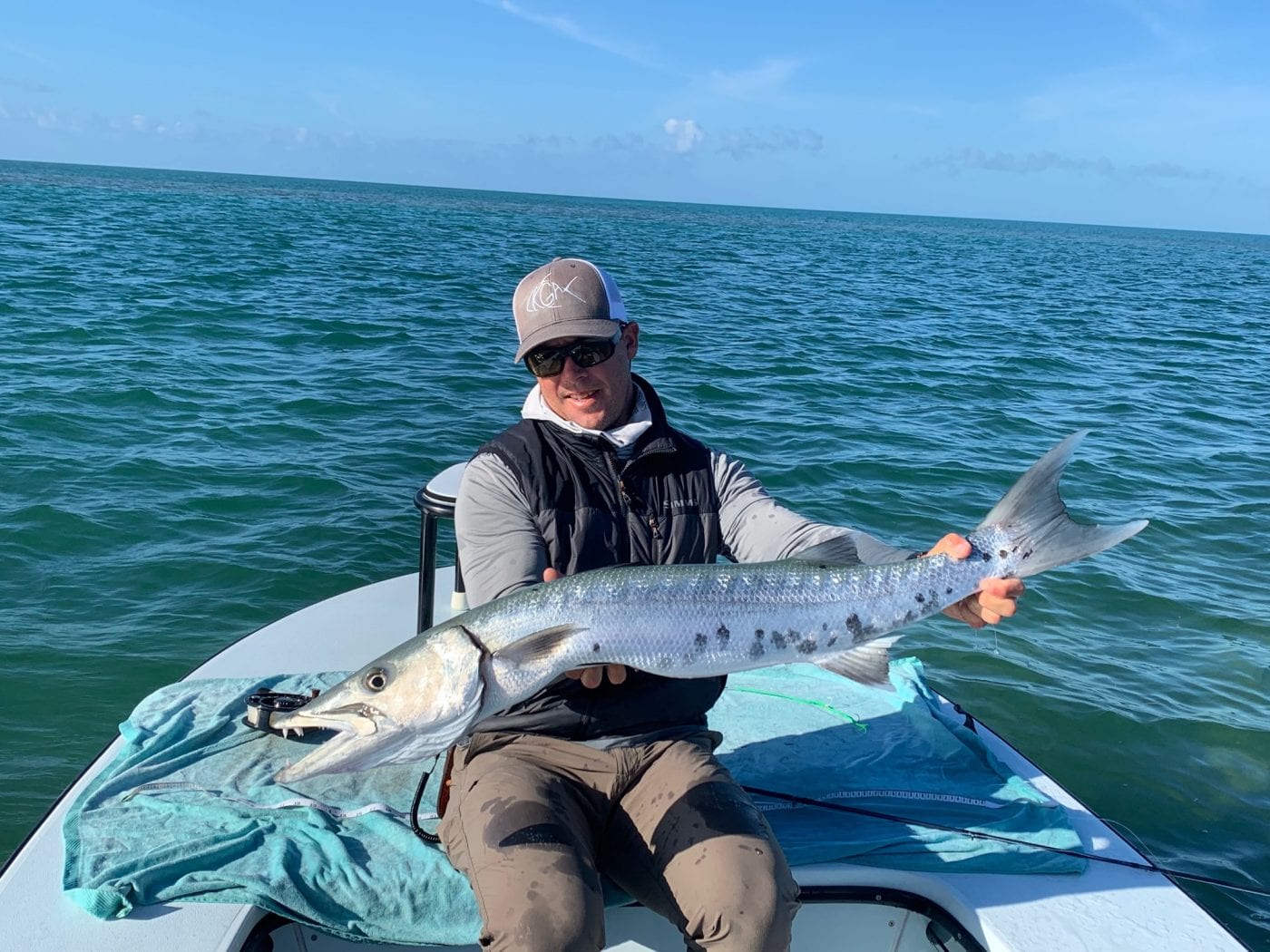 It’s rare in fly fishing to feel as lethal as we did while we were barracuda fishing, and after four hours of casting, fighting, and re-tying leaders we were ready for a change. Ian took us nearby to where a permit might be, and within minutes we had our first shot. The fish was hard to see and we had to cast a few different times to it as it lurked in some deeper water, but after a third presentation we were tight. Our streak continued as Ian netted the little guy: 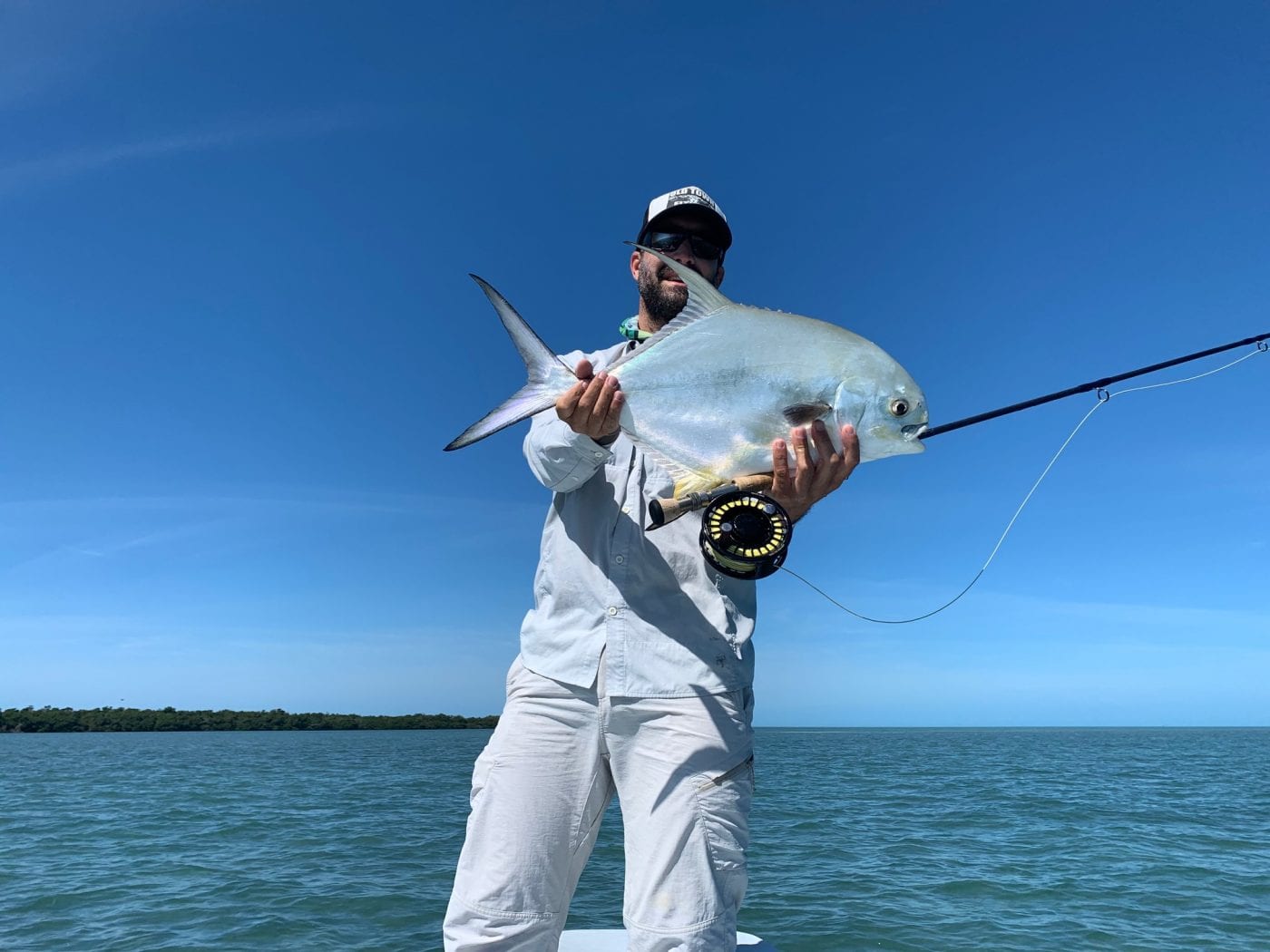 After this fish we had a few more close calls, though between fish that seemed overly aware and clouds that interrupted the sun we never had another shot that worked. Ian made a move after lunch, and we moved closer to home. Soon after we arrived, a single fish appeared on the bank, tailing down towards us. We had to fight a stiff right-hand cross wind on the presentation, but luck and some good boat handling got the fly near enough to the fish as it closed the gap for us to leave it and hope for the best. The fish tracked the fly on the first strip, stopping in lock step with the pause, and each strip was met with a hard inspection after the fly slowed down. When the fish was close enough to spook it finally burrowed hard on the fly, giving Ian and me a great view down the barrel of the pale blink when it opened its mouth. I set the hook as well as I could with the fish coming at me, and I wasn’t sure things were looking up until the line cleared and the fish barreled towards the nearby channel. After things were under control we fought the fish hard, trying to abbreviate the fight in case a shark developed any bad intentions. In a few minutes we had the fish in hand (after breaking the net on a failed first attempt) for pictures, weighing it at a stout 17 pounds: 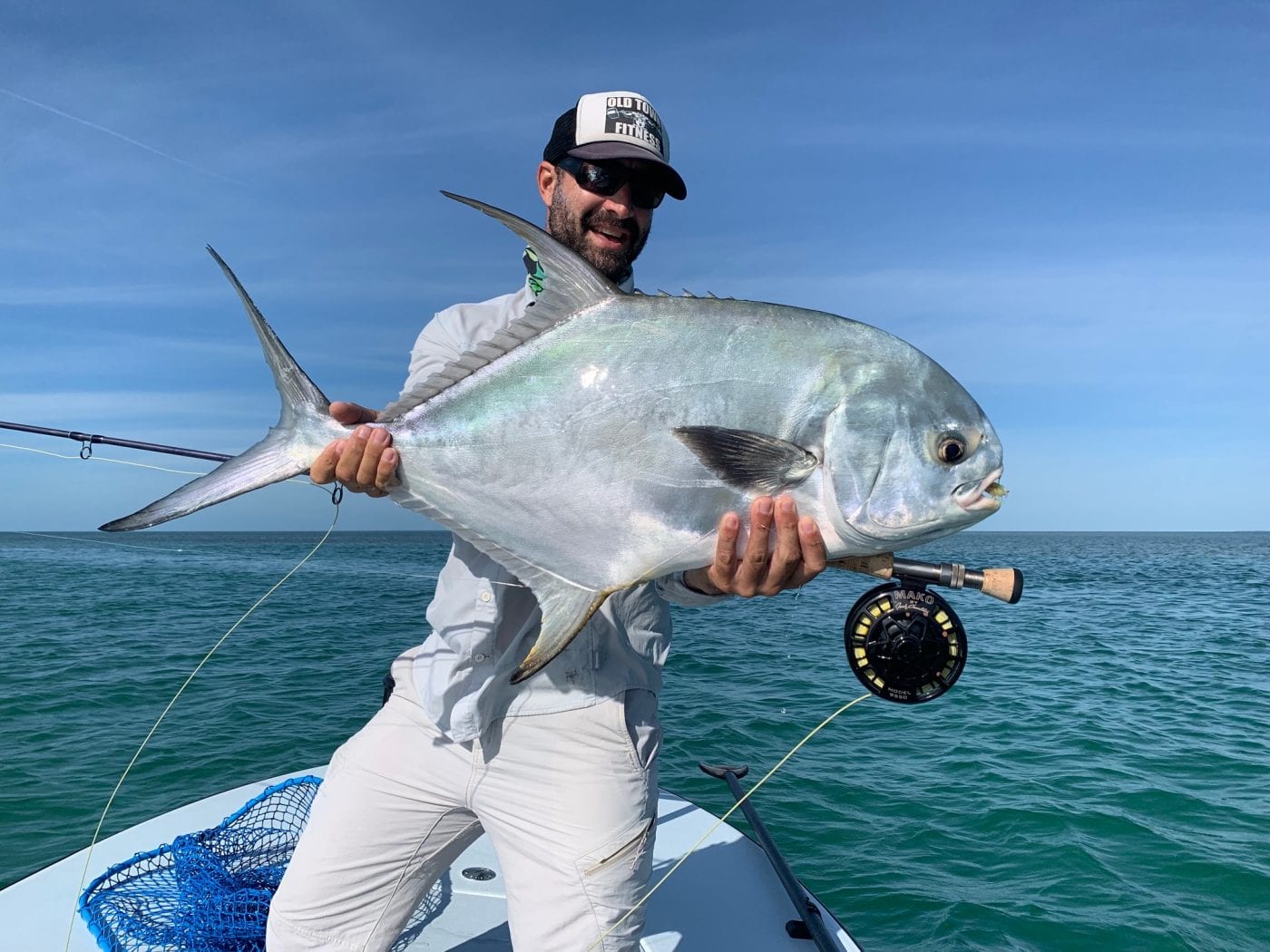 For me, this was a day that I was grateful for. It’s rare as a fly fisherman to feel effective at all, with all of the feathered flinging-around, and maybe even more so in the Florida Keys where the animals we’re after have learned our tactics. A day where we’re catching things as cool as giant barracuda and permit easily is rare, and I’m lucky to have been there when the lights were lit.

The last two days I fished with Ian again, and we were joined by Josef Borski on the first day. Reports will follow, and next week I’m fishing with John O’Hearn and Chad Huff before Chad and I head to the Everglades to fish with Steve for our rescheduled days. Between the 4 pound permit record down here and the 6 pound tarpon record up there, at the least I’ll have a story of loss to talk about here.