On Friday I spent the day with Joe Skrumbellos. We intended to fish for permit, given our respective obsession with their local population, though each of us acknowledged the time of year (and our desire to have some actual fun) by bringing a barracuda rod. We headed out in the morning, fishing a small piece of ground near the marina while we waited for a storm to clear from where we had a mind to begin.

Once the clouds passed through we were able to push the flat we had our minds on, and there found no evidence of a permit. We looked hard, hoping we might find one, but never did and moved on. We kept our eyes toward permit at the next spot, finding nothing again before the clouds moved in and forced us to look in other places for light.

Joe and I are competitors in the tournaments, and have very different approaches to permit fishing. Our common ground covers the broad strokes of fishing and competition: from the ground up, our approaches are vastly different. Because of this, it’s lots of fun to talk to one another about fishing. I can be totally open with him, unconcerned that he is going to rifle through those pages publicly, and I don’t feel the need to do examine his angle for my own benefit. We’re both happy with what we’re doing and content with the success we’ve had, and seeing where we overlap is as interesting as the places that we don’t: we are connected in ways that keep things interesting, but apart in enough that our wires don’t get tangled. All of this was good, since it gave us something to talk about for the rest of the morning and early afternoon, during which I was unable to find us a single permit to throw at.

We did, however, find some barracuda that wanted to play on some white sand and Joe got attached to one after only a few shots: 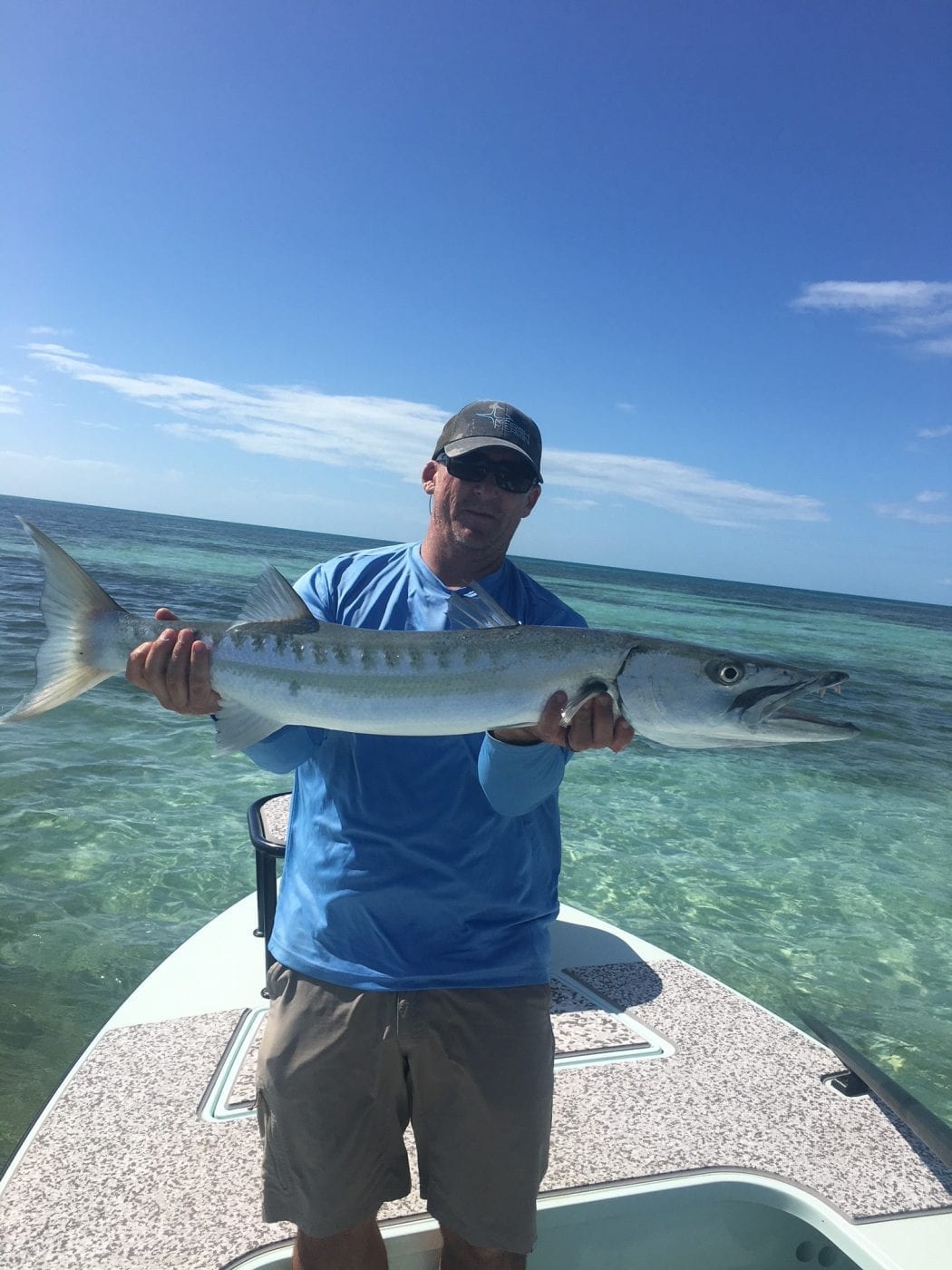 We kept on fishing for that barracuda for another hour or so, catching another smaller one and still not seeing a permit. At 3:30 we decided to make a run far away, not able to continue on in the proven fishless grounds we’d been hanging in.

After a short 30 minutes thanks to the extra horsepower on Beast we got somewhere new, and in last of the reasonable daylight we poled a flat in hopes we might finally find what we’d set out after. This didn’t work, and we relocated after figuring out that what we sought was not where we were currently seeking them. We ran again to a place nearby in the failing light, now looking for tails and tails only as some low lying clouds interrupted what was left of the sun.

We saw a permit tail enthusiastically and I got out to walk after it, and when it turned towards me I figured we were in for a grab. I got the fly close enough on the second shot, and the fish peeled away from its line and tracked in a slow arc in my direction as it followed the fly. Twice the fish tailed hard on what I figured was the fly, and twice I took a long strip to come tight but instead came up with nothing. I crouched down as low as I could to shorten my shadow in the low light, but eventually the permit hit it and swerved off hard. I got back in the boat and talked things over with Joe; we both agreed that life was unfair and we should have been tight.

Joe offered me the option of staying up on the bow, which I had no reason to turn down especially as I felt somewhat robbed, and we kept moving on in the lowering water. Soon Joe spotted a tail next to a white spot, and I hopped out again to wade towards it. The fish was tailing, and while it was larger than the first one we threw at it was also in deeper water, and for the second of these facts it was hard to see. I took a few casts in places I thought were nearly perfect, though the fish disagreed and turned in directions other than towards the fly each time a cast landed. I became more and more assertive with the placement until it was close enough, and after a long strip we were officially connected to what we’d come for. The fish swam fast toward the nearby deeper water, and I walked back towards the boat as Joe poled over to me. I hopped in, and we briefly discussed starting the motor before deciding that it was likely fine to fight this fish with the pole in hopes of keeping the flat ready for a potential second. Greed, as it turns out, was as cruel as ever: when the fly line was back on the reel and after another minute of normal things came undone when the fly fell out. Joe and I discussed this, neither of us knowing what went wrong, and soon Joe grabbed the rod and we kept fishing. We worked past sunset, into the grey glow of evening. Joe had a good shot at a pair of tailers that I foiled by interrupting his back cast with the push pole, and that was the last shot of our day. We chatted and stayed hopeful, discussing how late we could theoretically find permit tailing and whether or not night vision goggles would come in handy as late as we were sure that would be. Mostly we just watched the day close up shop and night stalk quietly in for its regular appearance.

One of the best parts about this fishery has always been the people, and Joe is someone that reminds me how important the human element is in this fishery. It’s easy for me to become focused on the animals, or successfully catching them (or not). People like Joe remind me that the fish and the fishing are only a part of what goes on in the Keys, and I feel lucky to count him as a friend.

Joe and I have involved one another in a friendly annual bet to see who could catch more permit, and his lead of five going in to the day remains intact. I’ll need some divine intervention to turn things around, but I’m more than OK losing to Joe.