After the two guest appearances I was excited about spending some time on the bow alone with John. As much as I love fishing with other people, doing the light line stuff and the like, when I do it a lot I miss spending the whole day on the bow with regular gear and just staying focused on normal permit fishing. 8-hour focus is one of the hallmarks of being a decent fisherman, particularly in a tournament, and I’m getting ready for the March Merkin which starts on Tuesday which gave us extra reason to be glad for the two day, two man arrangement.

John started us in a place that he thought might work, and we had a pair of less than stellar shots that we were unable to make anything out of. The fish were shy, and after an hour looking for some direction from them John made a move farther away for a look at something he wanted to check out. We spent a half hour running and powered down under a thick cover of clouds to make what we could out of conditions that were turning away from our interests. I had a close shot at a pair of permit, but their proximity to the boat meant I never had enough time to talk them in to my idea and they spun in a nervous circle before leaving the flat for good. Soon a school of fish approached, and I saw them first. I got a long cast off in the middle of the front of the large group, coming tight on the first strip. As I cleared the line we stayed quiet, but once the fish was on the reel we air-fived and felt pretty good about ourselves. Just about that time the fish jumped, showing itself not to be a permit but instead a small tarpon. Hilariously, we’d gotten this far in the catching of it before realizing it wasn’t even what we were looking for. Lip-hooked, the fish gave us a chance to catch it properly before we let it go and continued on our way in pursuit of the other gamefish.

John spotted a pair of tails near a white spot, and I got out and waded in to position. Of these fish’s identity there was no doubt, and I came tight on the second strip of the second cast among the scything spikes. The fish tore away from the flat after it was hooked and I walked back towards the boat so we could chase it down. John poled off the flat and started the motor, heading towards the nearby channel that the fish had ran towards. We fought the fish for longer than I have for a while, the cooler winter water and larger size prolonging the time most tense of permit fishing. We netted the fish without incident but admitted to one another after it was in the net that things felt like they were about to go wrong throughout the fight. The fish had a battle scar from a fight it had been in, and we laid it out to get a look at the healed wound: 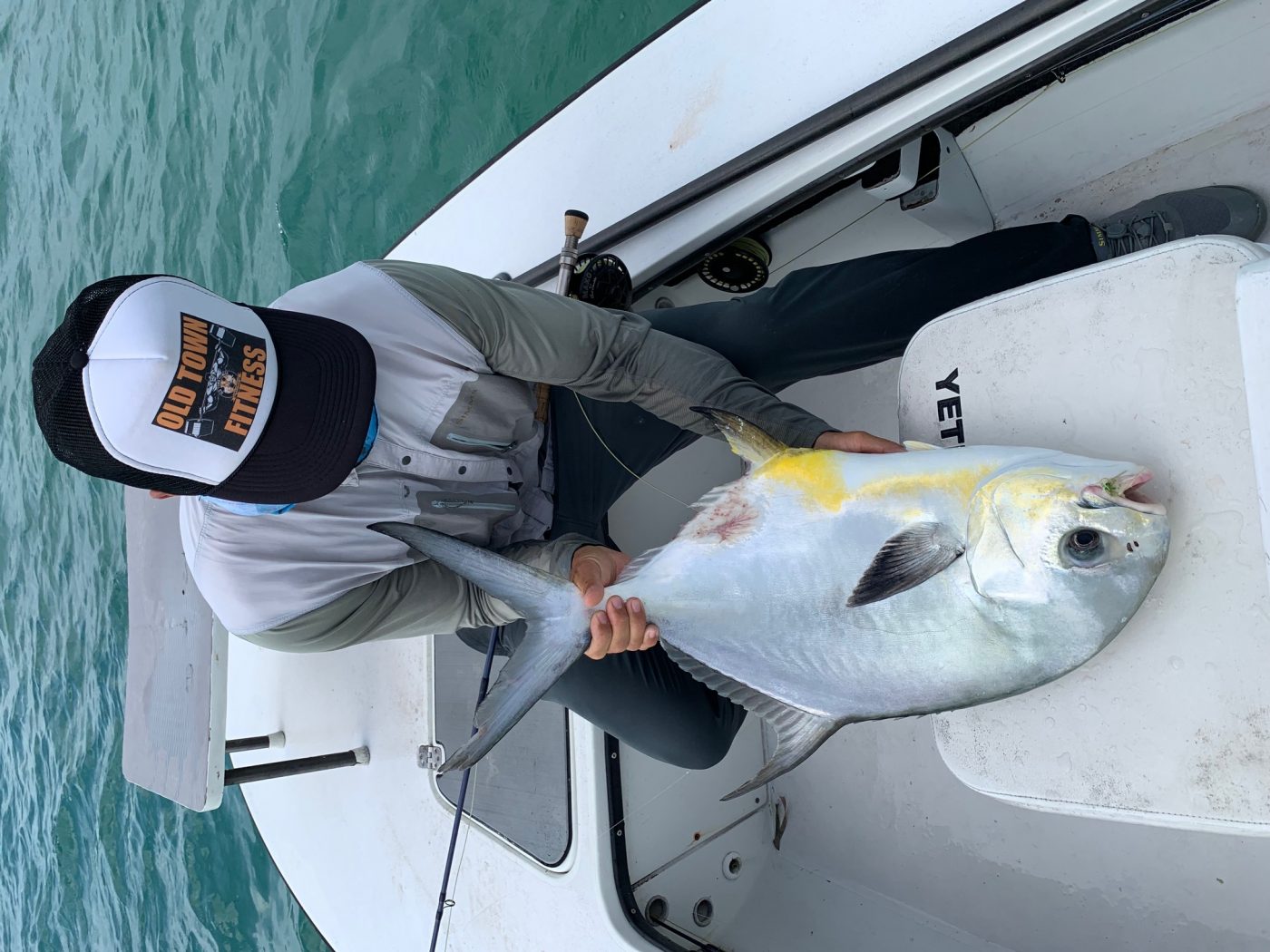 After we landed this one we moved, not wanting to wear out our welcome, and had another shot within a half hour. This fish gave us the courtesy of a great visual, and we watched as it lined up and pulsed after the fly before we came tight and began another extended fight. Bigger than the last and still fighting above its weight class, this fish gave us a hard 20 minutes in a nearby channel before letting Johnny get the net around it. Pictures followed: 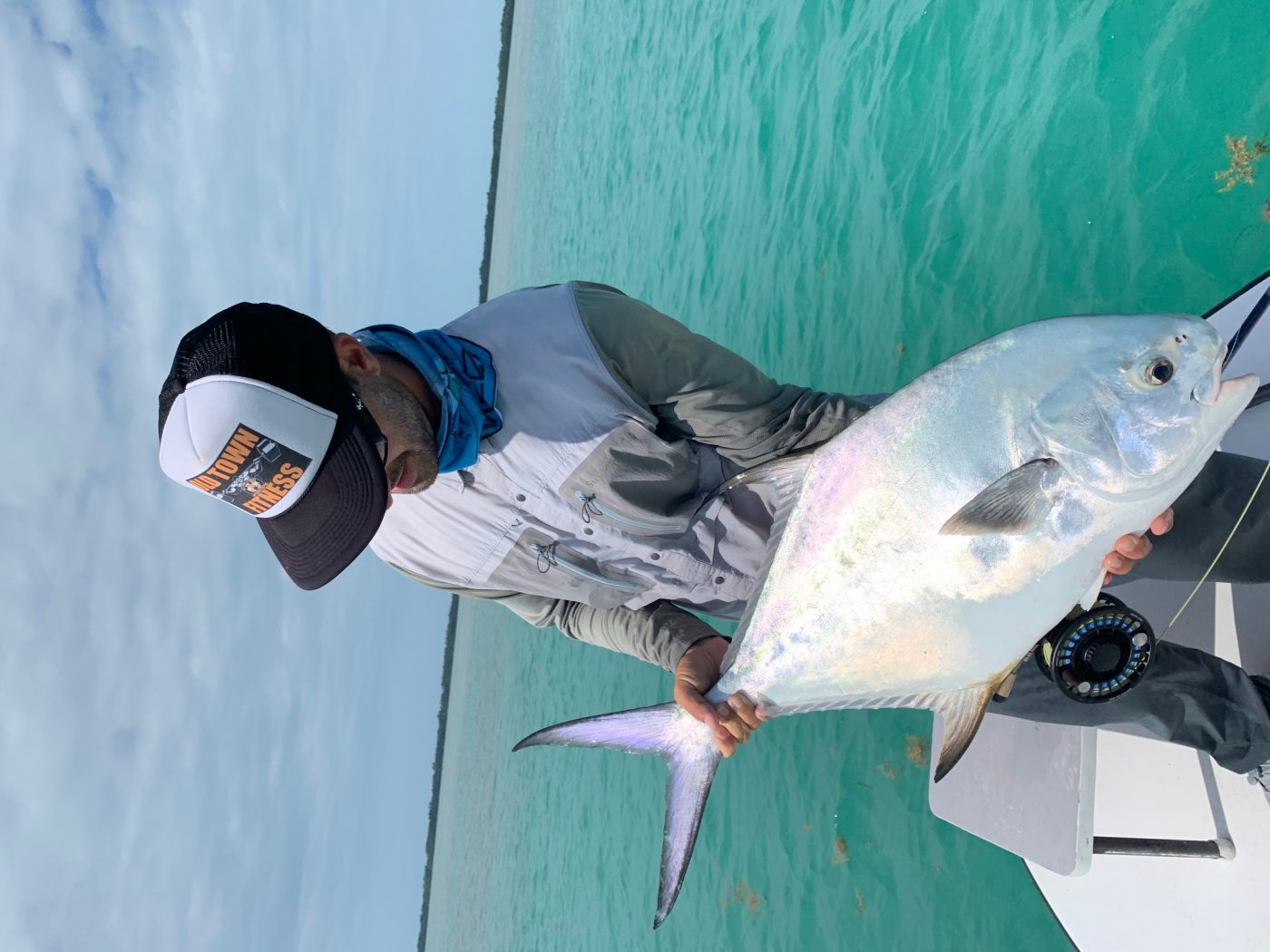 After these two permit (not to mention our bonus tarpon) we felt pretty untouchable, and John stopped somewhere on slacking water to pass some time before things got moving again. I changed flies to a new invention of Dave’s, figuring now was as good a time as any to give it a shot, and no sooner had I done that than the largest permit I may have ever cast to slithered its way on to the flat. I threw at it while wading, handcuffed by a lack of familiarity with this new feather crab, and after a few bad shots we watched the fish sigh and leave us to only guess about how big it was (not to mention if we would have stood a better chance with a fly that we actually had used before). I changed back to what we knew, and after one shot without any interest had a single smaller fish prick its tail up near the boat. I had been sitting down getting something out of the hatch and quickly grabbed the rod to get ready. John held the boat where it needed to be, tightening the gap a touch when the fish moved upwind, and on the third cast we got the fly where it needed to be. The fish tracked it for a few feet before it ate, and we cleared the line on another fish that fought harder than it would under warmer water circumstances. The fish stayed clever to the end of the fight, circling the push pole and the motor and making me careen back to the platform to prevent the line from wrapping around either. We finally got the small fish in the net, marveling at how a fish under ten pounds could nearly derail our efforts to capture it, and then took some pictures to mark our third for the day: 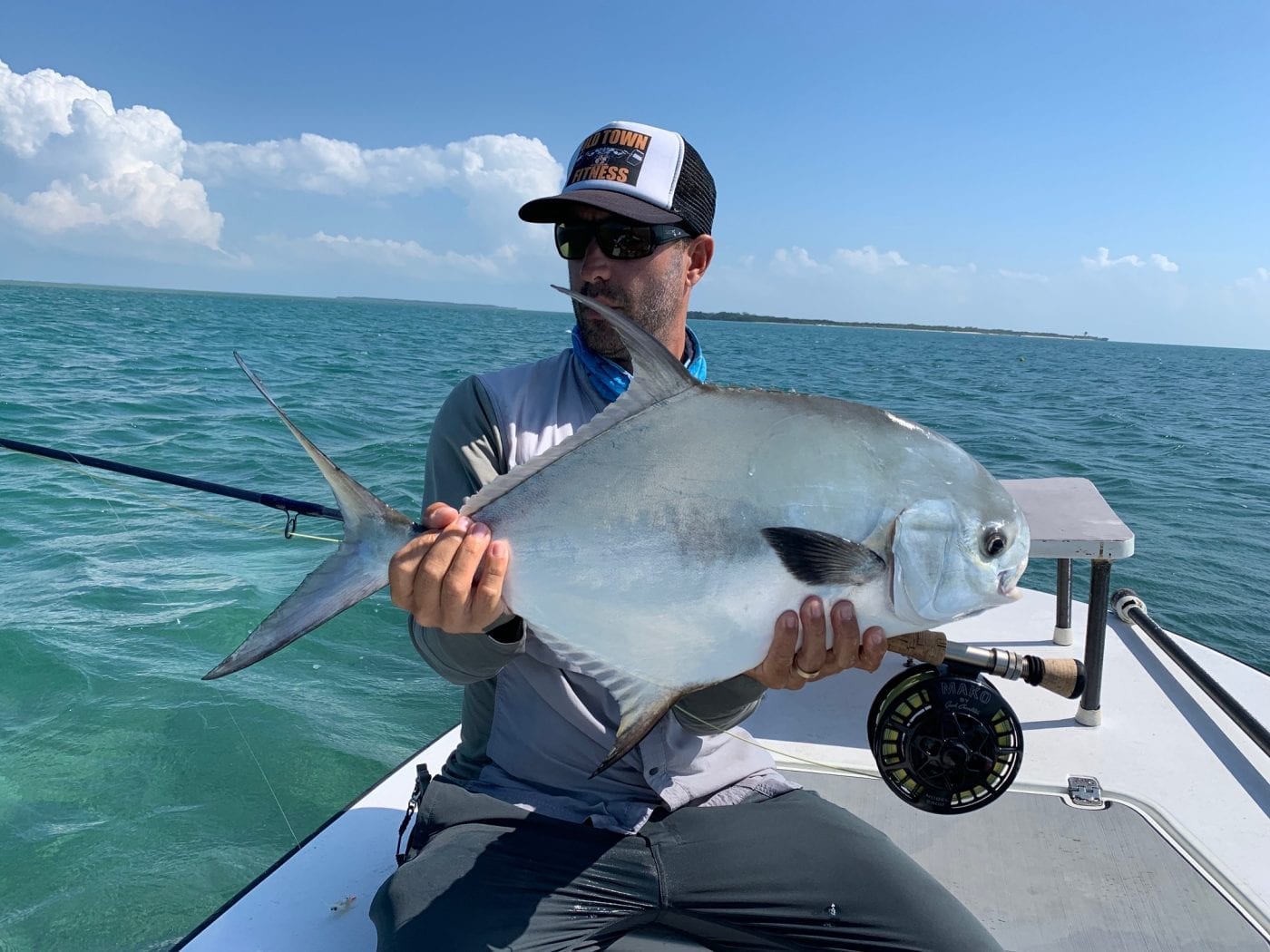 After these fish we were confident that what we were doing was working, and while we had another few shots and a very near miss from one more we were not able to convince another permit to play. We threw at a few bonefish in pursuit of a potential slam, not catching them either. We headed home after a last hour looking but not finding some permit in another place John wanted to check.

Our second day of fishing was one of looking in different places, and while we had a few shots we were not able to get tight to another permit. I had a few hard looks but none worked out, and generally we found fewer fish than the day before. Even when we picked up our prior day’s program in the afternoon, looking for some shots, we were unable to get in a groove that put us near enough to some permit to get one.

Two days ago I fished with Ian Slater and Brian Stilley for a day of fun with friends. Ian caught one handily at the first spot, and we spent the rest of the day looking for more. I had a few shots each place we went to, though I struggled to get things right enough to catch one. At our last spot, however, I had some decent wading at some deeper fish. I walked a cast out towards tails that were clearly attached to large bodies, and after 30 minutes of some hard and frustrating fishing was rewarded with a tail wag over where my fly was waiting to be smooched. I stripped and watched the tail wag, feeling nothing and making another slow drag of the fly before feeling the line stretch deliciously to a stop. The fish didn’t do much at first except swim slowly away from the grass, towards some deeper water, and I fought it from foot for a while before Ian and Brian came by with the skiff to close the gap. I pulled on the fish slowly, knowing it was larger than normal and not wanting to get greedy too soon. After 25 minutes a hammerhead showed up, and Ian chased it off with the E-tec. I kept pulling on the fish for another 5 minutes harder now for the shark, and after Brian grabbed it we quickly got on plane to get away from the shark had it been circling still. We had in our possession a very large permit, which we revived and held up for some pictures before releasing into the safety of open water: 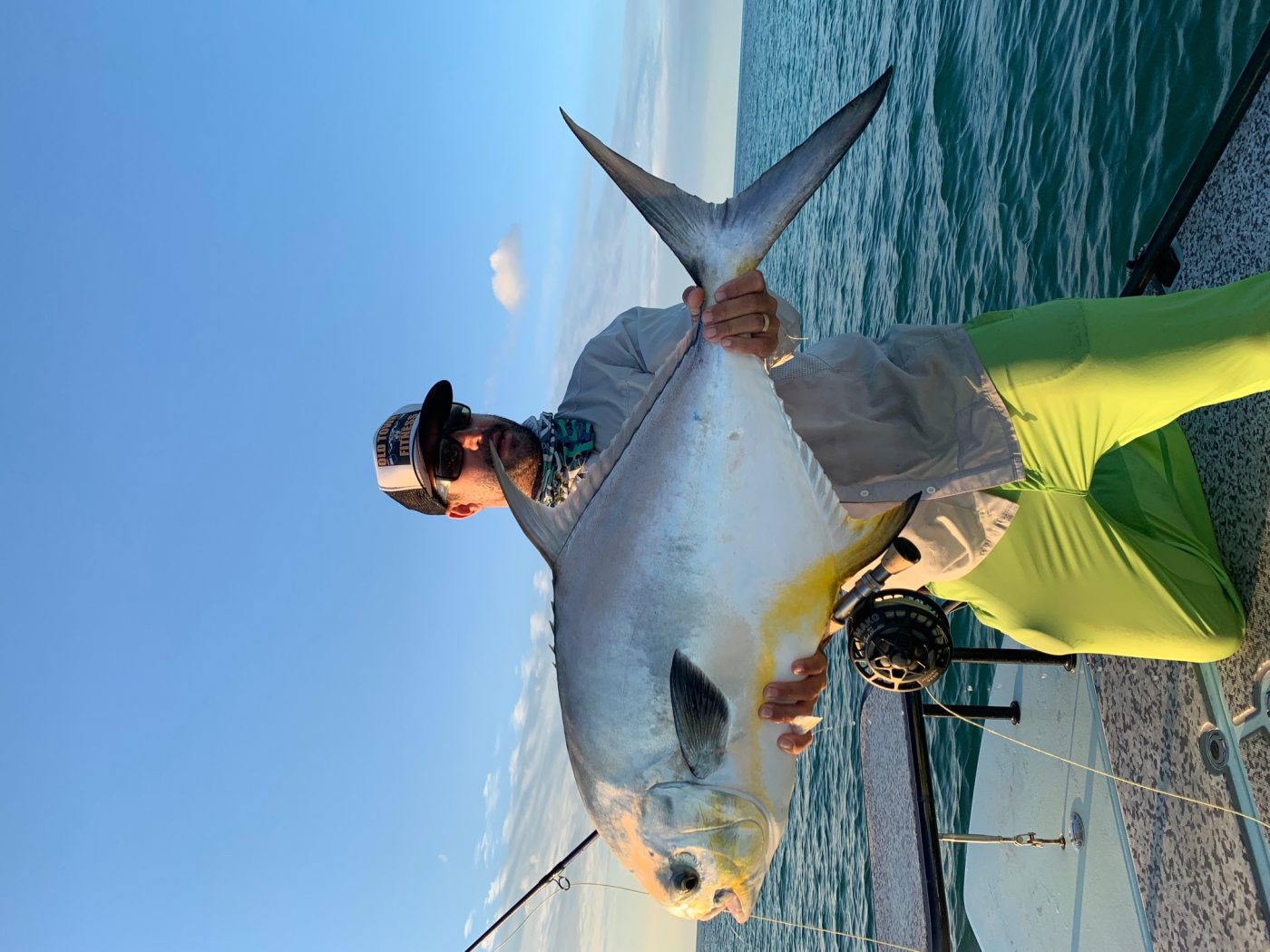 The fish weighed 25 pounds, and was my biggest in a long time. We headed home on the high of the capture, the three of us enjoying a nice thrill to cap it off.

I’d like to thank Johnny O’Hearn for a great two days and Ian and Brian for a fantastic one as well. The Merkin starts Tuesday, and I start with John tomorrow to prep. Results and our fishing will be up here as usual.