2020 fishing started for me with a great opportunity: spend a few days on the water as Ryan Bergeron’s guest, for a day with Simon Becker and another with Doug Kilpatrick. Ryan is a great friend and angler, and in the last few months we’ve been planning this trip to coincide with his travel to the Keys. The weather moved in coldly on Saturday evening, and the morning after we were scheduled to fish with Simon. The gusts to 37 kept us from leaving early in the day, though by mid-morning we were on the water and looking for barracuda. We poked around areas in the lee, staying out of the wind and looking for fish that had slid in for the same.
I hooked and lost a decent barracuda before Ryan got up, and despite his lack of experience fishing for these fish in the past he didn’t take long to hook a decent fish that he quickly brought to hand. Simon staked off and snapped a photo: 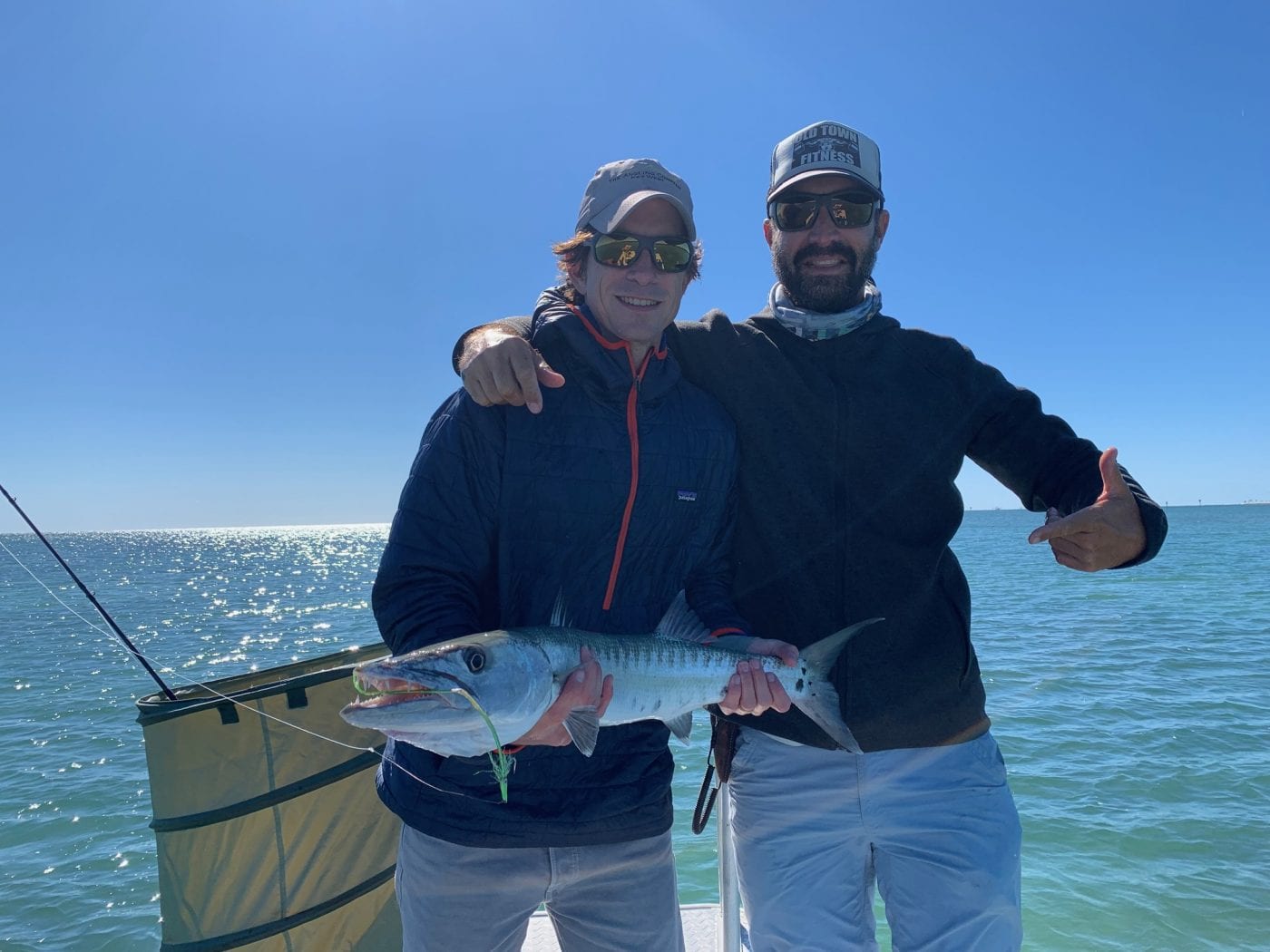 After lunch we hung around where we had been finding fish, and as the wind dropped more fish arrived. I lost another pair of fish in the later afternoon, and Ryan had another close call before Simon moved us onward. At the last two spots we found few fish, and as the light got low we headed for the dock. While our fishing wasn’t epic it was a great day anyway, and it goes to show that weather that seems at the outset to be a total close-out isn’t enough to keep some effort and positive attitude from making a day worth fishing.

The following day we fished with Doug Kilpatrick, and after the wind had been low overnight the barracuda had moved in more fully. The morning gave us a fair number of shots, and with a fly change we started getting bites before lunch. I had a smaller fish fall off and another large one miss the fly before hooking one essentially by accident–I had thrown at a group of fish but was short, and quickly stripped in to get ready for the next group. When the fly was next to the boat a fish shot out from nearby and ate it quickly, and after I cleared the line it gave a good account of itself. This fish proved once again that the best thing to expect while fishing for barracuda is the unexpected: 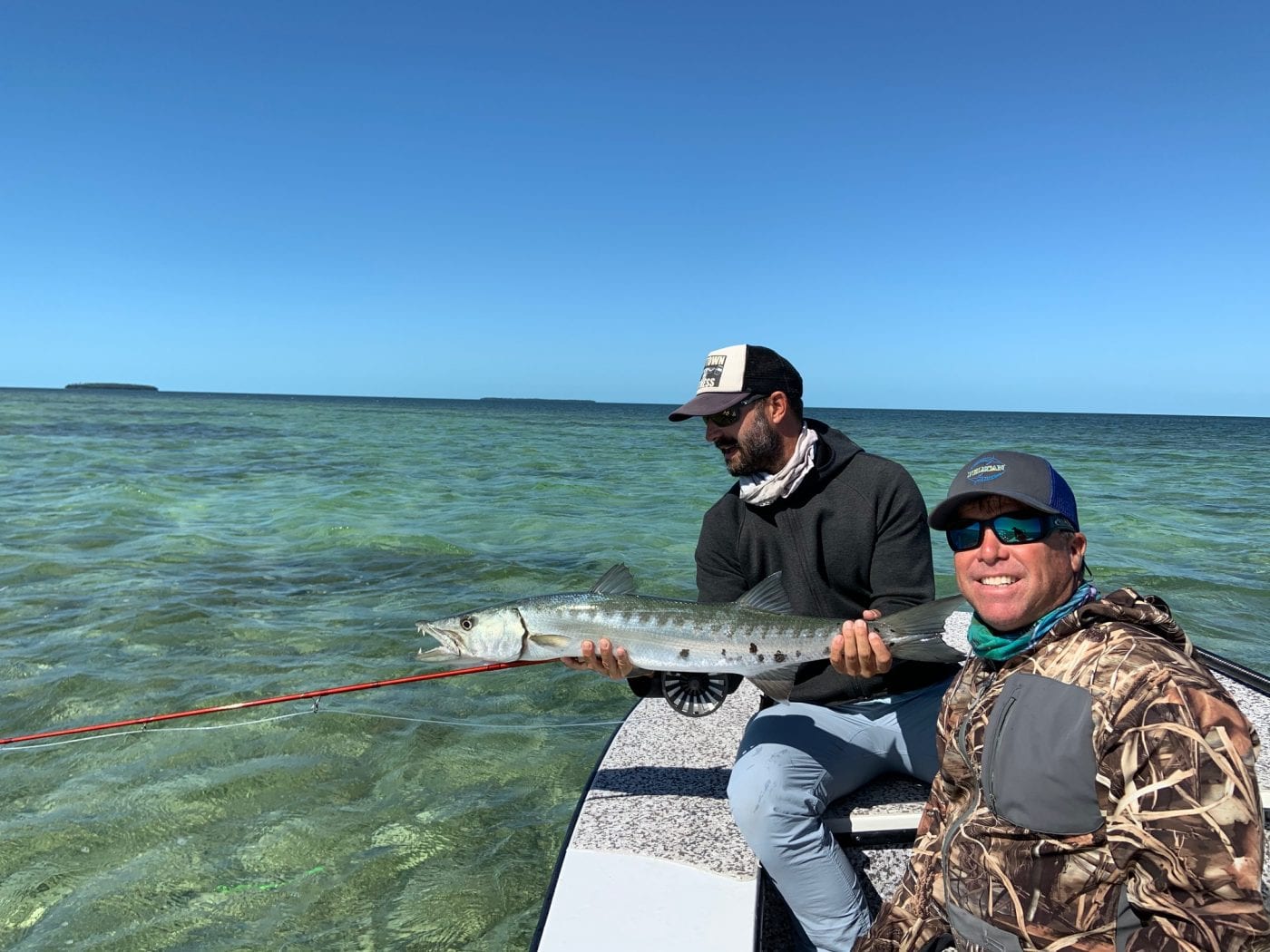 Ryan landed a smaller one not long thereafter, and after we looked elsewhere without finding much we returned to where the fish had been and set out for our final two hours of fishing.

I hooked a big fish that ate the fly fast and ran off faster once it was hooked, pulling into the rod a tangle of running line that jammed in the third stripping guide and took the top two pieces of the fly rod with it. We came close to landing this fish before the fly came out, helped no doubt by the tip of the rod pushing against the bed of the lead hook, and after that Ryan was up. He had a few close shots before one showed up some ways away, and after speeding up the fly when the fish was behind it hooked a solid fish, landing it easily in a few minutes for some pictures: 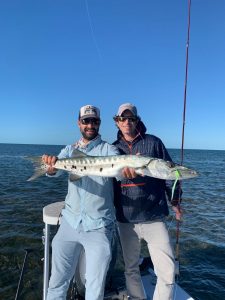 I’d like to thank Ryan for his invitation, and both Simon and Doug for their hard work at turning a pair of tough weather days into great ones, and I look forward to more time on the water with all three of these people in the coming months.

I leave Sunday for the Everglades with Steve Huff, attempting as always the six. Chad will be there and the weather looks great, so I imagine we will at least pick a fight or two.