Yesterday I fished for the first time since the new year, and it didn’t disappoint. I had Ian booked for the day in hopes that we might get lucky with some warm January weather, and I was off by a day or two. The conditions were improving, however, after a long period of cold weather, and we were afforded a day of marginal conditions that gave us hope we might find something to play with.
Our plan included permit, of course, but we also brought along barracuda gear in case our optimism couldn’t raise the water temperature. We bumped around for a while in the morning, looking but not finding any barracuda, and after a spot change Ian found us a few nice ones to throw at. I was fishing a reel that a friend of mine made, a click-and-pawl job that he’s designed over the last few years, thinking that it might be fun to use it for this kind of low pressure fishing, which became of note when the biggest barracuda I’ve ever hooked on a fly rod took a swipe next to the boat and took off.
I did what I could to palm the reel and stay attached, and as we fought the fish Ian and I both talked about how this might be the first 50-inch fish we’ve landed together. I’ve only caught one thus far, a fish of a little over 50″ with Doug Kilpatrick four years ago, and while I’ve seen a fair number and had a smaller number eat the fly I’ve not been able to bring another one to hand that bested the magical 50-inch mark.
The fight was normal, which seemed strange given how big the fish was, and when we landed it we weighed it at 25.5 pounds. We didn’t have a tape to measure it with, but took a piece of mono and cut it to size, squirreling it away to measure later. We took some pictures and quickly let it go, pretty sure we were north of the 50-inch benchmark: 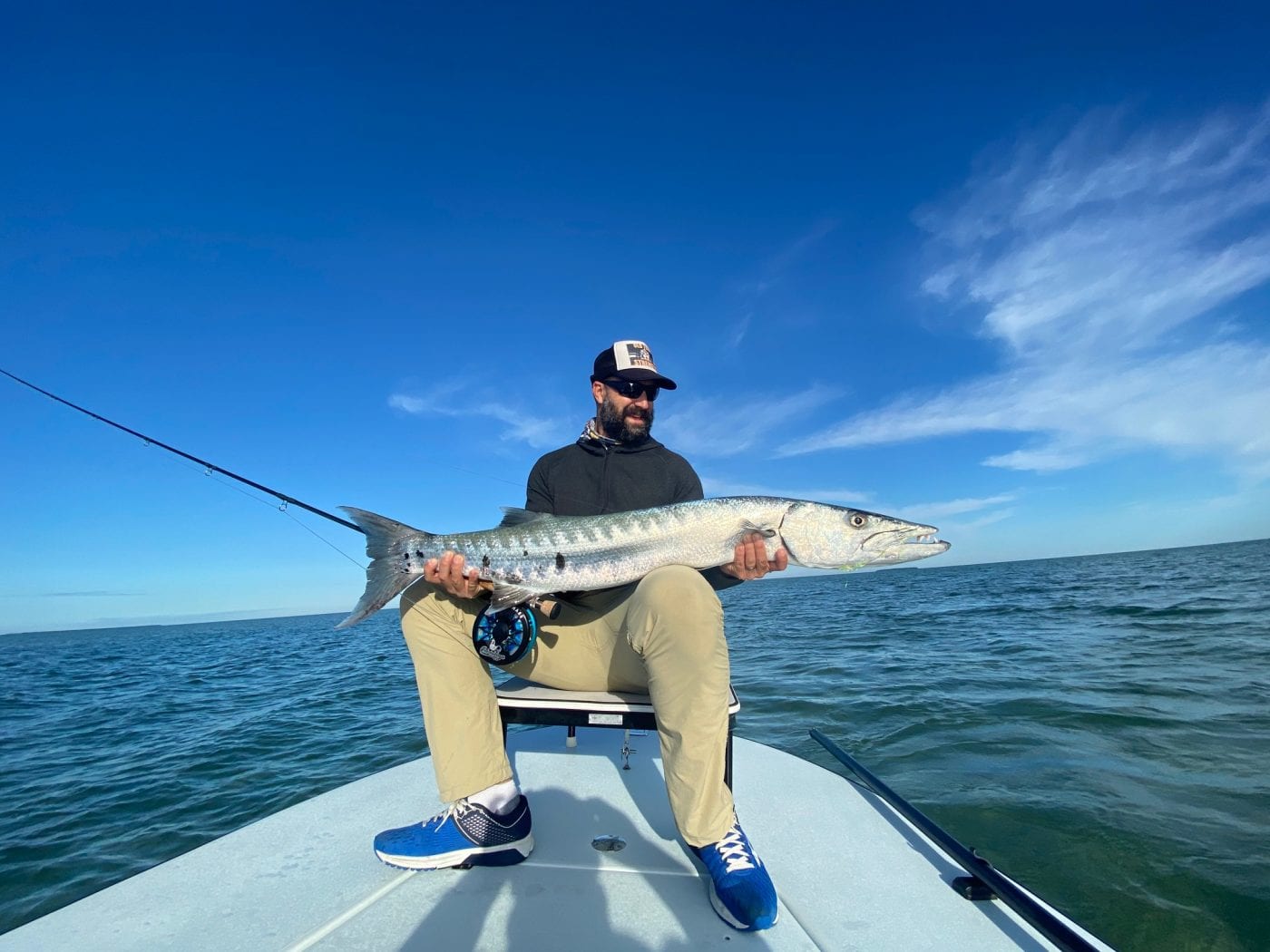 We kept on in the area for a half hour before Ian decided to move, and after we did we settled in to some of the most effective barracuda fishing I’ve ever had.
In four hours we lost count of the fish we caught–nearly all stayed on, and most were easily over 40 inches. Ordinarily, just a few fish that big would be noteworthy in a day of fishing, but this day we were locked in an easy groove, hooking a little under half of the many fish we threw at and releasing all but one or two at the boat. The hooks stayed where they were supposed to, and when we discussed looking for a permit we decided together to stay and enjoy the fishing we had until it petered out. We threw at singles, doubles, and small packs of fish for another two hours, letting the Fair Chase do its job on the butt of the rod. When we reached the end of the bank we were fishing we had lunch, then decided to go look for a permit.

The permit fishing we had was slow. Still cold, the water kept the shots far between and the fish flighty. We had a few decent opportunities that we felt could work, but each time the fish swerved hard away from the fly and kept us on our toes. In the later afternoon we moved again, toward another few fish that didn’t cooperate, and when the day was done we headed in. When the day ends on a flat note it’s easy to forget how great the beginning was, but when I got home and measured the monofilament we’d cut to find the length of the cuda. At 51 3/8 inches, it was the largest I’ve caught, and a great mark to start off the 2021 fishing year with.

I’ve got a lot of fishing coming up: tomorrow with Ian and Wes, Monday with John and a friend, and Wednesday with Nick Labadie in preparation for the Sugarloaf Showdown.