With this report I hope to be current on the fishing I’ve been up to. If you have been keeping up with the weather and fishing reports from the Keys, it’s no surprise that the fishing has been hard. The weather that rolled through in the Merkin has stayed, preventing anything from getting right. What fishing we have at the moment is spotty, and we are all waiting for things to break open. Despite that, the show must go on and I’m not about to cancel any days I have on the books due to some lame weather. After the day with Ray Fecher I slipped out for a day with Ian and another with Simon and Kat.

First up was the day with Ian, and we arrived at the ramp surrounded by storms. Despite our heel dragging we were on the water shortly after 730, and Ian got us in to a place that he thought might hold a shot. We pushed an edge, looking for tarpon as the storms bore down on us. In an hour of fishing we had a few shots–all the fish were laid up, and in no mood for what we had in mind. After the edge of the closest storm got over us Ian ran us to a nearby place for a less wet look, though as soon as we arrived Ian felt unsure of the move and we ran again. This time Ian took us to a place that had just been under the dark of the approaching storm we’d run from, and we watched as the nearby cell pulled with it the wind and things slicked off.

In the slick window we spotted a group of tarpon rolling, and soon got in to position for a toss. The first cast should have worked but didn’t, and when two fish snaked ahead of the pair I threw at the bigger of the two and watched as the smaller one made things happen instead. The fish took off in to some deeper water, and instead of starting the motor Ian poled the animal down. We thought the fish was almost exactly 70 pounds, and after 10 minutes we had the fish boatside for some glamour shots. In retrospect I wish we’d strapped the animal, as it would have been a very painful call to make in either weight tournament, but I’ll call it 70 as close as I could call it here: 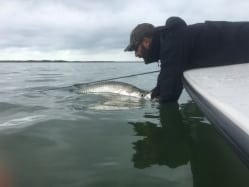 After that we were hopeful that things would continue, as we had seen a few rolling fish throughout the short fight. We poled back in to the spot, searching for what we had seen. The fish that had rolled so easily when we were already tight became shy, and after chasing down a few cormorants we made a move. We bumped around for the rest of the day, finding a pocket of fish in our last spot that wanted nothing to do with our advances. We tried a few different flies and had a number of good shots, but the fish were over the weather and high pressure and we left them alone.

Following the day with Ian I went out with Simon Becker and Kat for a day. We were again greeted with the gates of rain, and again we were looking for tarpon. By the time we arrived at the first spot the clouds disappeared for a short time and Simon had us in range of some fish. Kat got the party started with a large fish in the first spot of the day, and I snapped a picture of the beast before it threw the hook: 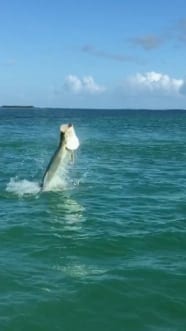 After that the rain moved in and we were back to the cloudy glare. We found a few shots here and there, but spent the majority of the day moving around and avoiding the approaching storms. As the day began to expire, however, Simon had one last trick up his sleeve. In the awful weather we found again a large school or tarpon to throw at, and I had a nice one that we had nearly floated before the hook broke: 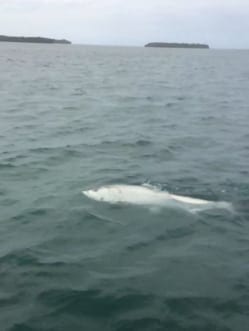 Kat was up after the metal failure, and she had her own to contend with in short order: 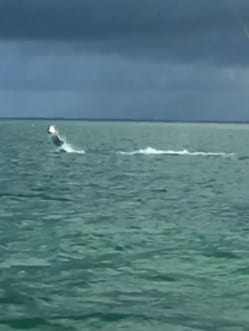 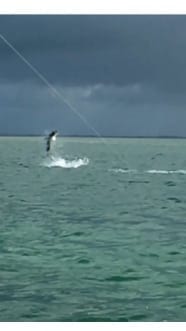 With that our late day was finished, and Simon took us to the dock.

Following this day I had a pair of days with John O’Hearn at the beginning of the week, which I will get to before too long. Worry not–the weather remains windy and the fishing still tough, so there’s hope.