I’ve been a bad blogger recently, and have a fair amount to make up on these pages. Between the shop being busier than usual and the upcoming Gold Cup, I’m stretched as thin as usual in June. That said I haven’t been stretched too thin to get out on the water, and in addition to two days with John O’Hearn in the earlier part of the week I was out with Ian Slater at the end of the week prior for two days. The Hawley wrapped up yesterday, and the results were impressive. The five day event was won by Captain Perry Coleman and Bart Beasley with 16 releases, who’s seven-fish day on day two (not to mention their ongoing high scores thereafter) brought them a lead that they never gave up. In second were last year’s grand chapions Captain Dustin Huff and Thane Morgan, who made up a lot of ground on the last day and were within striking distance of Perry and Bart with 14 releases. Third was won on time by Captain Brian Helms and Rand Holstead, who pushed Captain Craig Brewer and Baker Bishop into fourth–both teams had 13 releases. We’d like to congratulate the winners as always, and it’s been fun keeping up with the dailies. Watching this tournament from afar is more interesting to me than it should be, though with the weather I was glad to be fishing in Gold Cup preparation instead.

I fished with Ian on Monday and again on Thursday, splitting the days up. On Monday we started early and were joined by a mystery guest that didn’t fish, so Ian and I opted for the hard in the paint approach until we had to get home earlier than we would have liked. We started by looking for some fish in tough light, finding only a single roll that never worked out before leaving for different real estate. We stopped in a few spots before digging our heels in, throwing at the passersby.

In a few hours of fishing, we had relatively consistent shots at fish that were consistently disinterested. We tried a few different flies, changed leads and angles, and were only able to force a single opening that didn’t work out to our favor. We left perhaps later than we should have in retrospect, and continued to where we started the day for a look in the sunlight. We were able to get a small amount of interest from a few of the laid up fish, though when the tide felt right to Ian he took us elsewhere in search of more opportunities.

At our last stop we again dug our heels in, and made a hard effort to finish out the day strong. On two shots we had a bite, and started the motor to give chase to a 90 pound fish in hopes of the grab. We pulled on the fish hard for ten minutes, and when things looked to be nearing the end game something odd happened: the butt section broke at the nail knot. I’m sure that if you keep up with these reports you are aware that we’ve lost tarpon to all kinds of iterations of bad luck, but this was a new one for me. My only guess what that this was the butt section that had been with us through all of our fish in the Golden Fly, and as such was compromised–particularly by the long fight that we lost on day 3.

With that we were done, and headed home to have dinner.

Our second day of fishing was without a guest, mystery or otherwise, and we started early. Our first stop yielded a bite early on, and after a few minutes we were able to get a hand on the small fish for a picture, which once again is in the gallery and not here. A quick note about the gallery issue: it’s being fixed, and we’ve timed the switch for the Gold Cup. After this report and the next, we’ll be on the new stuff. So stay tuned for more pictures to be uploaded in line into the reports.

After the easy opening, we had to work at it for a while. Ian ran us to a few places, and in each of them we had a few shots, but none seemed to work out until mid-morning when we dug our heels in. After a wait on the tide, we started getting shots. Our second shot gave up the bite easily from a large individual, though this fish came off. The fish started to come regularly just as my current favorite fly started working poorly, and I had to work through some frustration from fish that didn’t want to play with the gamepieces I thought they should. Ian switched me to a fly that he had used with good results, and easily we were able to get two bites. Now I was rattled; what I had no experience with was working fine, and what I was relying on to do the job wasn’t. The only thing to do was to go back to what I wanted to use and force an error, which we did in the next few minutes. A lithe 50-pounder made quick work of the angle and after a short fight we had it in the hand. Of this one I have a picture, which is in the gallery as well but has somehow escaped the software glitch which has been preventing me from uploading pictures here: 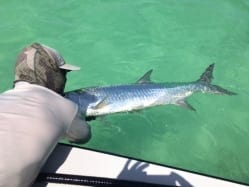 After this we left, wanting to explore new grounds. The first stop Ian made we found some fish but they exhibited a poor attitude, and Ian took us to a place near where John and I had lost the monster in the Golden Fly for a final putting in of the work.

We had two shots–the first one didn’t work, and 15 minutes later we had a large laid up fish give a hard look at the fly before tracking it and ultimately opening up for the grab. I set the hook on another very large fish that didn’t jump, and we started the motor to give chase.

This fish was nearly as big as the day-3 monster, and hooked in a similar way: inside the mouth, causing the point of pressure to change with the angle. I have been wondering about what I could have done differently on that day, and most recently had been thinking of the constant-knife-at-throat approach. With this fish I tested that theory, pulling as hard as I could as early on as I was able to. The fish started to tire early, though without a jump we were still under the threat of a longer than hoped for attachment. I pulled hard for the duration, and on one of the pulls the tippet broke and the game was over. Honestly, I was somewhat relieved to revisit the fight we’d lost in this way: had I been reckless on this fish and won out, I’d be convinced that things might have been different in the Golden Fly. As it is, I’m chalking it up to the way things can sometimes be and can’t wait for my next chance to pull on a big one.

That was the end of my second day with Ian, and now I have only the two days earlier this week to catch up on here. I’ll get that done before I start with John on Thursday, and we will fish into the Gold Cup that starts the following Monday. Results + our fishing in detail will follow.