After the pair of days with Ian, I went out with John for a pair last week. After the Golden Fly we had taken a little time off, and were ready to get back at it before we start in earnest for the Gold Cup. Instead of going hard in tournament prep mode we opted for a more low-key approach, one that paid dividends in terms of our mental as well as piscatorial well-being. I should add that the weather during this pair of days was far from perfect, and the fishing was tough in most places. We left early as usual on the first day, and headed out to find something to throw at.

When we arrived where John wanted to start we were met with nothing much, and John soon relocated to another place for a glance. We kept our eyes open, and after an hour of seeing nothing we were on our way again to find something new. We arrived at a new place and made what we could of the fish, which were hiding in the overcast. A few shots came our way quickly and without warning, and from one of close shots we were able to get a grab that I summarily sent off to the butcher. We continued on our way, making what we could of the low light by creeping along so as not to miss any shots. The shots we were getting were of low quality, though through some fixation we were able to get another grab from a bigger fish. This one made a hard run and shaved into the class, breaking off and forcing us to re-rig. We were interrupted by an eager young guide that wanted to pole by us, though a calm explanation of the reason for our slow pace (and the multitude of fish that he had poled by to get to us implied) seemed to put things at rest, and when he left to start his cloud sprint over we were able to do some work. I hooked a smaller fish that jumped off before coming tight to a 90 pounder that John poled after. This fish we were able to grab, maintaining our one weight fish per day pace set so far in 2017. Johnny grabbed the fish and held it while I fussed with the camera, and just as I started to take a picture things got out of hand. Here’ what I was able to capture of the capture on film:

Following this we continued, getting another bite from a fish that again didn’t stay connected before moving on in search of new water. We found a point and waited for some shots to come our way, but after 30 minutes we were not able to maintain our level of interest and left for where we’d been finding them. We had a few shots again, and toward the latter part of the day were forced to accept that spending the balance of the day in one spot was wearing a little thin. John took us to a final edge, where we saw a small string of fish that we couldn’t find again in the clouds before our time was up.

The weather the next day was supposed to be even worse than this day, and with that forecast we decided to make a long run early in the morning because well why not. We met at 5:45, which was pushed back slightly by my forgetting our lunches at home, though we were able to get on our way before six–gas station treats in hand.

We ran for a little over an hour, into the wet maw of an approaching front. The moment we stopped we were surrounded by tarpon, and had to get a fly wet as soon as we stripped out to intercept the school of fish. I came tight immediately and dropped it, though another two casts gave us a lasting connection and we headed off into the fight. Between not wanting to compromise the schools of fish and not being able to pole into the wind and tide the fish was able to get a fair amount of line out on us, but when we were free of the rolling scales we started the motor and closed the gap. Another 10 minutes and we had the 90-pounder in hand for a picture. Here it is:

The fishing continued, and in the next hour we were able to connect to another two fish. Both were smaller than the first, and both fell victim to different forms of bad luck. The first disconnected when the hook came out, and the second wore through the shock. We kept at it, getting a few more bites before the fish were completely over the harassment. We ran back towards home in the late morning, arriving in the early afternoon. John had an idea to look for a permit, which given the pace and mind set of these two days was a perfect addition. We looked in one spot and didn’t find any, but in the next had a shot for our efforts. Once again, John and I were recipients of the upside of luck and had a permit on a single shot. The picture can’t load into the reports from the gallery, so you’ll have to check there. Just kidding! this one loaded: 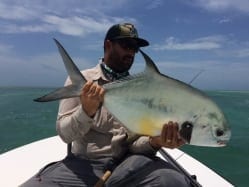 After that John wanted to look for a bonefish to complete the slam, but I vetoed the idea and asked to continue with our tarpon fishing escapade. After an hour without a shot I wished I’d reconsidered, but at that point the time was up and we were headed home.

I’d like to thank John for a perfect two days on the water, and I know this: whatever the outcome of the Gold Cup is, we’ve been putting in the work over the last year and having fun catching many more tarpon than we have in the past. We’ll be working for a first place finish, and if we have fun and run the play-by-play we’ll have a shot at it.

I start with John on Thursday upcoming, and I’ll have pictures and a lengthy report after the Gold Cup wraps up.