Earlier this month I fished in the March Merkin with Ian Slater. This was our first tournament together, and I had a fantastic time. The weather was turning from nasty to nicer starting on the first day, and while we gave it our all on the prefish day we only found a single shot for the windy hours Ian put in on the platform. We elected not to throw at this fish, hoping it might give us a chance to find it again on the first tournament day, and we left to look elsewh ere. Throughout the day I held a barracuda rod and threw at any we saw, passing the time until we timed out to make it to the captain’s meeting.

Day One
On the first day of competition we were plagued by a wicked wind and cold water, two things that worked together against what we were trying to do. We saw a fish early, which helped us stay focused, though after a few hours without seeing anything to throw at we fell into the calm of waiting for the one or two shots we knew we were likely to get at some unknown moment. As it happened they were close to one another, and both represented opportunities I felt likely to work. The first was a large single, which tracked the fly and looked hard before bailing out. The second was at a pair of smaller fish, and our cast was in position to work once again. This time one of the pair spun hard on the fly, spooking as it landed but returning for what Ian and I hoped might be an eat. The fish instead twitched off, and that was the sum of the shots we were able to get on our first day of fishing. At the dock we found that for most of the field the fishing had been difficult as well, though there were some exceptions: Simon Becker and Clint Packo, in their second tournament, had posted two fish. Behind them were Aaron Snell and Sam Kaufman and Scott Irvine and Tim Brune–both with large fish.

Day Two
The second day was far better than the first, and our expectations were that this was going to be a moving day. At our first spot we had a number of shots in low light, and of the four or so we had two seemed destined to work. Twice the fish spun and crept in behind the fly, though again in both of these cases the fish decided to bail out before they ate the fly. We tried not to sit in our frustration, instead focusing on what we could control and leaving the parts we could not where they lay. As the day wore on our nerves became further inflamed by more of the same behavior from the fish–each time we felt that a cast had nothing left to do but to work the fish would begin to show interest then slowly turn off. By the end of the day we had gotten nearly a dozen shots, and from these we were unable to pull any bites for our efforts. At the dock, despite the better conditions and improved fishing, we found that no one had pulled in front of Simon and Clint, who remained in first with their pair from day one. Kat and Doug had caught one, as well as Permit King and some others, but the head of the field remained unchanged. This left for an interesting final day, and one which Ian and I planned on making the most of.

Day Three
As we had been finding plenty of fish to throw at and felt that things could break in our direction at any moment, Ian and I decided to stick with our plan from the day prior. I couldn’t shake the feeling that things could start working, and while we made a few small changes to our system we also were aware that we didn’t have far to go to get where we needed. The morning fishing wasn’t what it was the day before, though in a few hours we pieced together three shots that had every chance of working and didn’t. We again kept our chins up and kept moving, making an effort to keep the frustration from taking us down into a mindset that’s always tough to fish from.
In the afternoon we had another spectacular shot, and this one again resulted in the fish simply ignoring the fly. Simon and Clint were nearby, and we watched them hook one and give chase into a nearby channel. Over the course of an hour we watched them fight the permit, likely to be the winner, and when we left to relocate we saw them measuring a photographing a permit nearly a mile and a half from where they started, confirming that the deficit we had to overcome was now three fish.
Ian moved us to a place nearby, and with an hour plus to go we had a shot at a fish that worked, finally, in a familiar and successful way. I came tight to the fish and fought it as fast as I could, hoping to get back to where we had hooked it for another two if the fishing was going to fall in our direction, and we quickly landed and measured the fish and took a picture to mark the occasion before getting back on top: 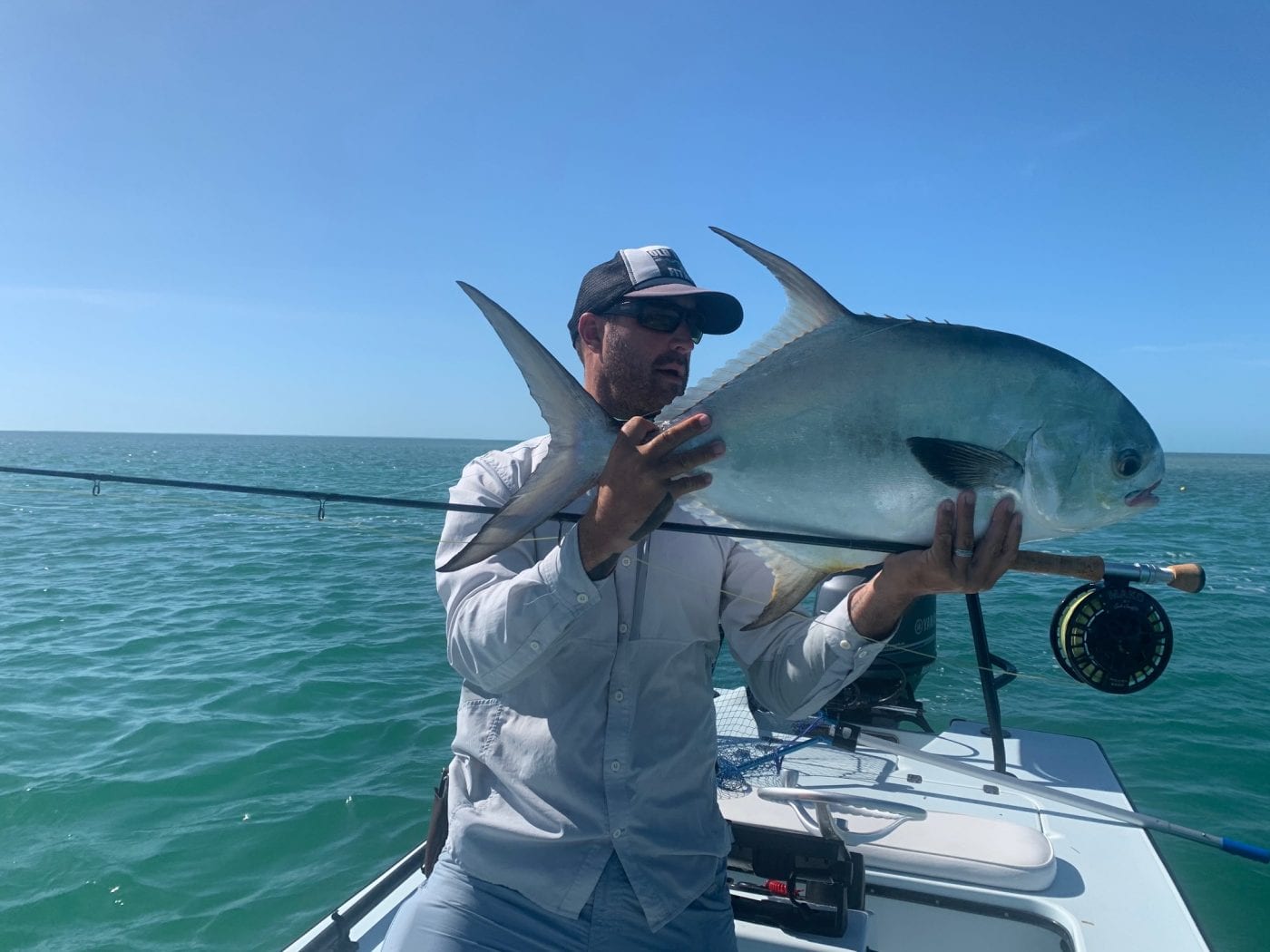 In the final hour we were unable to hook another one, though a pair of shots confirmed that we might have been closer than Simon and Clint would have liked. When the lines out alarm sounded we headed in, one fish on the board and hopeful that people close to us had done well. At the dock we found that Dustin Huff and Thane Morgan had scored a giant at 33. 5 inches, pushing them in to second place in front of Scott Irvine and Tim Brune. Simon and Clint’s third fish had been unnecessary for their victory, though it was representative of the skill inherent in pair of guys that earned their spot on top of the podium. Ian and I were the only other team to catch a fish on the final day, and sticking with our plan to the end and getting one on the board when things aren’t going our way is a strong indicator that we have a good future in front of us in the tournament scene.

Special congratulations are in order to Simon and Clint, who did a great job and deserve all the respect in the world. Most of the readership knows that I proposed to my wife on a charter with Simon, and as such he’s remained a good friend through the years. One thing I can say is that people like him that work hard, smart and humbly are exactly the kind of people that tournaments allow us to celebrate together.

I’ve fished a lot since the tournament, given how much free time I have, and more will be posted here shortly.

In other news, Kat recently caught the ladies 6lb tippet permit record with Captain Brandon Cyr, smashing the old record of 9.75 lbs with a 21-pound fish a few days ago. I’d like to extend a tip of the hat to them both for posting this despite the myriad worries we are all plagued with, and she’s on to the 8 next, once she finds out if the tippet tests out.