On Monday I fished with Ian Slater. With the Goldenfly now rapidly approaching and tournament preparations put on hold during the tough early season weather, the pressure was on to make something happen on a day that was (finally) nice. We got an early start, and while we were in a reasonable location for some rolling fish to kick the party off we were alone. We wandered through a few places before we settled in to the first place we were to make a lengthy stay. For an hour we waited, again met by no tarpon. When Ian couldn’t wait it out any longer we moved on in search something more.

We soon ended up on a point near a channel, waiting for a passerby. We had a few short shots at fish, but none of them gave us enough time to prepare for. We divided up the looking, each to a side, and still the fish were hard to see in time to prepare for. The fish that did get a look at the fly exhibited typical early season non-compliance, and we stuck with it in hopes to get lucky. A single fish got by me from the left, and we were forced to take an over-the-shoulder shot. The fish took a hard turn and came out of the water after the fly, but with the strange angle we were unable to get tight to the fish. Despite the bad luck, we were roused by the idea that our day still had some untapped potential. We hung around for a bit but soon left when the fish stopped swimming by, and went somewhere a few miles away. There we took a long look into some utterly fishless water, and at the end of that we ran again in the other direction for nearly 30 minutes in search of something new.

At our next stop we started off with high hopes that only got higher when a pair of fish passed by the boat. We were unable to get the grab from them, and another shot confirmed we were in need of an angle change. We adjusted as best we could, and when a single fish passed behind the boat Ian was able to turn us in time and we made things happen. When the fish cleared to the reel we decided to pole it down to preserve the fishing, and in 20 minutes had the 100 pounder next to the boat for pictures: 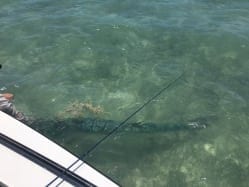 We started the motor briefly to revive the fish, and when it swam off we poled back on to the bank and went along our way. As soon as we got into tarpon territory a small group swam by, and we got the fly in front of one of them. This fish obliged again, though after the adrenaline soaking I’d just been through I was a little handsy with the hook set and pulled the fly out of harm’s way. As normal as a too-tight winding was in the moment, I tried to think about the implications of this issue in a broader context: in a given set of days there is a certain number of times that the good bits are going to happen, and it’s a given that they won’t be evenly spaced. Despite how normal it was for me to be unprepared for the next shot, I was reminded that I am never able to know precisely when the next shot will be and I made up my mind to be be reminded of (and prepared for) this in upcoming events.

We fished through the area, getting a few more shots along the way. As usual, a few shots could have worked but none did and when the real estate ran out we ran for new parts. We made our way to a last place, hoping to cap the day with a few shots. The fish were there in small numbers and hard to see, and we stepped up for a final assault before the clock ran out.

In all, I’d say we had 8 or ten shots at our final destination. The fish were passing us by early, and we were hardly able to get an angle on them before they made us. Despite this, we messed with angles and approach as best we could to find a way to force an error.

On the last shot we were able to execute our pieced together plan, and we watched as the lead fish in a small group of three made its way after the fly and took a hard grab. The fish instantly took off, jumping once and running hard into the backing. A knot cleared through the guides on the first run, and we had to regain a large amount of backing before we could have a look at what we were dealing with. Finally we got a hand on the knot and picked it apart before losing it again. Ian motored up on the knot anew, and this time we were able to clear the tangle to straight before the fish ran a second time.

This fish had more fight in it than the fish from earlier, and while it had more to give it gave it all–and early. After the first long run we were making easy headway on a tired fish, and it took a short while longer to grab the beast. We thought it near 90 pounds, and took a picture to mark the occasion: 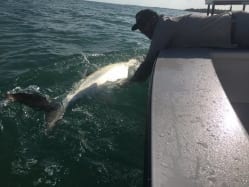 With that the day was finished on a high note. A day with two big fish to hand is a good one, and it’s always nice to get a few.

Tomorrow with Simon, Monday with Ian, week following with John O’Hearn, and the the Golden Fly.

More to come as always.