Last Saturday I fished with Kat and Simon Becker. Another (sigh) cold front had rolled through the day before, and while the fishing wasn’t completely shut down the fish were clearly going to be unhappy with the recent turn for the worse.

We started early under some heavy cloud cover and heavy wind, and Simon ran us to a place we thought might hold some early morning opportunity. Kat was up first, and it didn’t take long for us to spot a few small tarpon rolling in shallow water. Her first cast into the group of rolls worked, and despite losing the fish to a rattling jump we were happy to still be in the fish. Kat hooked another and lost it, and after some re-positioning from Simon got a bite from a small fish that stayed connected. This fish she was able to bring to hand for pictures, and Simon took over the camera duties while I grabbed the fish: 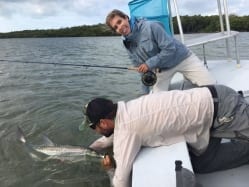 I was up next, and though the fish seemed a little perturbed we still saw tarpon rolling out of range to make our way toward. Simon staked the boat off and we waited, not wanting to disturb the fish. Within 20 minutes of lying in wait the wait paid off, and we had a downwind shot at a single rolling fish. A different fish ate the fly on the first strip, and this one was a lot larger than the earlier juveniles–a stout 50-pounder that gave a good account of itself. I fought the fish for a few minutes, and as Kat was preparing to grab the fish the class broke and we went back to work for another. The morning fishing slowed down after this, though Simon had another tough-weather trick up his sleeve. Our next stop was a long distance from where we started, but Kat didn’t waste any time making things happen there. In 20 minutes she was tight to a very large tarpon, and we soon gave chase with the motor after the beast.

Kat pulled on the fish hard, and in 10 minutes things were looking grabby. The fish lolled on the surface, and as I prepared to grab the fish the tippet once again broke. After Kat’s monster we returned to the spot, hoping to find another participant. The fishing slowed but we remained rapt, and after an hour we had pieced together a few shots for our continued efforts without another bite. The afternoon arrived and we left, looking for some action as the weather became pretty. Our hopes were high as the clouds disappeared and the winds died down.

As is so often the case, however, the weather brought only hope. We fished the rest of the day without much in the way of shots until the end of the day, when we found a few low-quality passersby that refused to give us an angle. Despite the weather getting quite good at the end of the day we were left with only our morning success to show for our work.

Following the day I joined them Kat and Simon fished again, and the following day I fished with Ian. This was interrupted by an appearance in federal jury duty in the morning, and while I hoped to be dismissed I was unable to commit to the day. Jake Brownscombe from BTT was to join us, so in my morning absence he went out with Ian they tried to tag a tarpon. The acoustic tagging program has been implanting acoustic transponders in tarpon and permit so they can track where they go and for how long, and the idea of being involved in this project has been of minor interest to me. Honestly I can be kind of contrary at times, and while I was interested in the project I was more interested in hanging out with Jake–a friend who I don’t get much of an opportunity spend time with.

When I was (thankfully) not asked to serve on the jury by noon, I called the boys and they came to pick me up. We ran for 45 minutes before shutting down, and found a small number of fish to throw at right away. The fish were big, on the bottom, and showed just enough interest to keep us from leaving. We didn’t have a ton of shots, but the ones we did made us stay. After an hour we were able to coax a bite from a very large fish and went off after it. In 20 minutes we felt like we might have a shot at landing the fish for its procedure, but I sadly broke the fish off when I got too greedy.

We went back into the shy, trying again to get a bite from the intermittent shots. We ran the plays as best as we knew how in the face of fish not rewarding even our best efforts. From another large single fish we were able to get a bite, though I never came tight. We slipped up on a fly change to try to shift the odds to our favor, though soon we returned to what had worked and stuck with it once again. Finally, after another 30 minutes of rejection, we had a shot at a laid up fish that went as planned. The fly fell in front of the fish, and in the waves it was hard to decode what was happening. We saw a slight curl of the smudge in the right direction, and as soon as the fish shuddered I felt the weight and was tight. The fish tore across the channel, hole making and hauling with it the tiny fly that had tripped it up.

After chasing the fish with the motor to gain some line back Ian started poling for the end game, and while things were tense there isn’t a lot to report about the fight. In 20 minutes, after a hard but uneventful tug of war, we had the fish in hand and put it in the sling for the procedure. We snapped what pictures we could of the surgery, though most of the available hands were put to work on the science side of things:

We surgeried and sutured, and when the fish was put right side up I held on while we got the measurements. A fork length of 71 inches and a girth of 36.5 put this fish at 118 pounds in the tournament measurement, and that we did it on the Goldenfly supplied tippet just for fun made things feel that much better. I must say that after being a part of such a cool process gave me new appreciation for BTT and particularly for the guys that are doing all the work (that’s you, Jake). Here’s a better view of the fish, post surgery and return to its own devices: 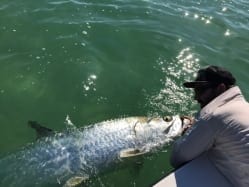 We let the fish go and headed on, looking for another to finish the day. After the big girl, however, we were unable to get tight again and we headed home when the light got low.

That’s it for me getting current, and I’m with John tomorrow and the next in preparation for the Golden Fly the week following. I’ll try to get up the report from Monday and Tuesday before the tournament starts, and will of course upload the typical results + our fishing report after things have finished up.