In the beginning of the week, I fished with John O’Hearn for two days. Weather has since moved in, and while it looks like things are going to turn around in time for the Golden Fly this Monday the wind at the moment is howling its way into all of our faces.

Monday was a different story, and it was the lack of wind that kept things from getting interesting. We started early and made our way to a spot we wanted to check for early fishing in the tournaments, and this immediately proved to be a good call. John approached the rolling group from a distance, and our first cast was met with an explosive grab on its way back to us. We fought the fish for a short time, and within 20 minutes had the 90 pounder in hand. While we considered going back into the fray for another shot, our desire to spend some time in a new places got the better of us and we went to the ocean.

Our ocean fishing felt more frustrating at the time than it does in retrospect. The first hour of fishing brought us two fantastic bites, and while neither kept us tight we were excited by the prospect of turning the day into something epic. I was perhaps more fixated on the side bet I’d entered in to with Nicky and Andy Mill (Goldenfly rules from 8-5 PM, winner takes the pool) than I should have been, and I hoped we might pull a few releases and a weight from the passing tarpon threads . By noon, however, confidence had been eroded by the continuous passing by of disinterested fish in the increasingly slick calm. We kept our focus throughout the day, though I had a hard time staying happy knowing that things were getting away from me. We discussed going elsewhere, though by the early afternoon we were dug in to our knees and stuck with it.

We never got another bite, though we were throwing at fish all day. When 5 o’clock rolled around we headed home, and found out that Nicky and Andy had beaten on them with Doug. They had a “weight” fish, at 70.8 pounds, and with another four “releases” had a total of over 1400 points. Our only fish for the day came before the agreed upon lines in time, and as such didn’t count so the honors went to team Mill/Kilpatrick.

The second day we elected to change the program, and after a start that didn’t yield much more than frustration John called a move elsewhere and we settled in to some work. We hooked an 80 pound fish that nearly made it to the boat before coming unbuttoned, and when we went back to the edge a shot at a pair yielded a bite from the bigger of the two. We fought the fish for a while before realizing that the fly was buried in a cork that the fish was dragging around with it from an earlier encounter with a bait fisherman, and we fought the fish nearly to the boat before the shock (not ours) wore through. We returned to the spot and made another pass, this time hooking a very large fish that we went after with the motor. It jumped and we took some pictures:

We pulled on the fish for 20 minutes before John got a hand on it for the first time, and after taking the point of the hook in his finger a few more times we got the fish under control. We snapped some pictures and estimated the fish at north of 120 before it kicked away from John’s vice grip, and I jumped in after it to get it right-sided, giving John an opportunity to catch a most awkward meeting of two animals: 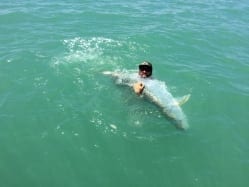 After releasing the large fish we ran elsewhere, looking to change things up. The fish were passing by surly and not exactly interested in what we had to offer, but we got great grab from a giant to start the party off right. We stuck with it for a little longer, and after making a few fly changes were able to force an error from a smaller fish we felt was close to 75 pounds. The fish took a long run and then bore down, ducking under the boat and making things harder than they had to be in the waves and deeper water. In all, we fought this fish for 45 minutes. I had it close to floated a number of times, but was never able to get the job completed completely. Finally, after I was nearly exhausted and the fish made another shoveling face dive to the bottom, the hook broke and we were free to go work on other things.

John ran us to a new place, timing the run so we had an idea of what it would take if we were under tournament time constraints. We stopped at the bank he wanted to fish just as the wind started to kick up, and we had two shots before a third gave us something to pull on. This fish was a little harder to beat than the first one but nowhere near and obstinate as the one prior, and to finish the day we grabbed ahold of a near 100 pound fish for a sweet photo-op, which I can’t post here since my computer abilities are outdone–it’s in the gallery if you want to see it (as are all the photos here usually, and I don’t have time to fuss with the pc computer when I have leaders to tie and lists to check before I leave tomorrow).

Speaking of tomorrow, I’m heading out to fish with John early and then driving up to Islamorada for the Captain’s meeting and kick-off. Tournament starts Monday and ends Wednesday–results and report will be up at the end of the week or weekend.