Earlier this month I returned from Cuba, a last-minute stowaway on a trip from a great group of four guys that had set up the trip a year ago through BTT. Arriving in Camaguay, we took a bus down to the departure point for the mothership and piled in for a day’s run to where we were going to spend our next week. The run was easy, and the next morning we set out to fish our way towards the moving mothership.
My first day was spent with Jim, one of the members of the group that I didn’t know, and we caught as many bonefish as any two people could have hoped for. On the way to our destination we also caught a few smaller tarpon and a large horse eye jack, which gave a good account of itself and kept Jim busy for a few minutes between beers. Rising early the next day I got out with Brandon Cyr, the only person on the trip I knew going in, and we tried our hand at permit fishing. Each of us hoped for a permit, and we had a side bet to see who would catch the first (or, if we were lucky, the most). Fishing was good and it didn’t take Brandon long to hook one, which we chased after as it ran in to the nearby minefield of coral and hard tippet-hungry jagged holes. Once the fish was on the reel we spun in tight circles to prevent the permit from finding safety, Brandon braced against the leaning bar as we kept as close as we could. Outside of the boat being such an unsafe place for nylon under tension, I grabbed the tail of the fish as soon as I had a chance to. Dripping with effort, we posed for pictures to mark the moment: 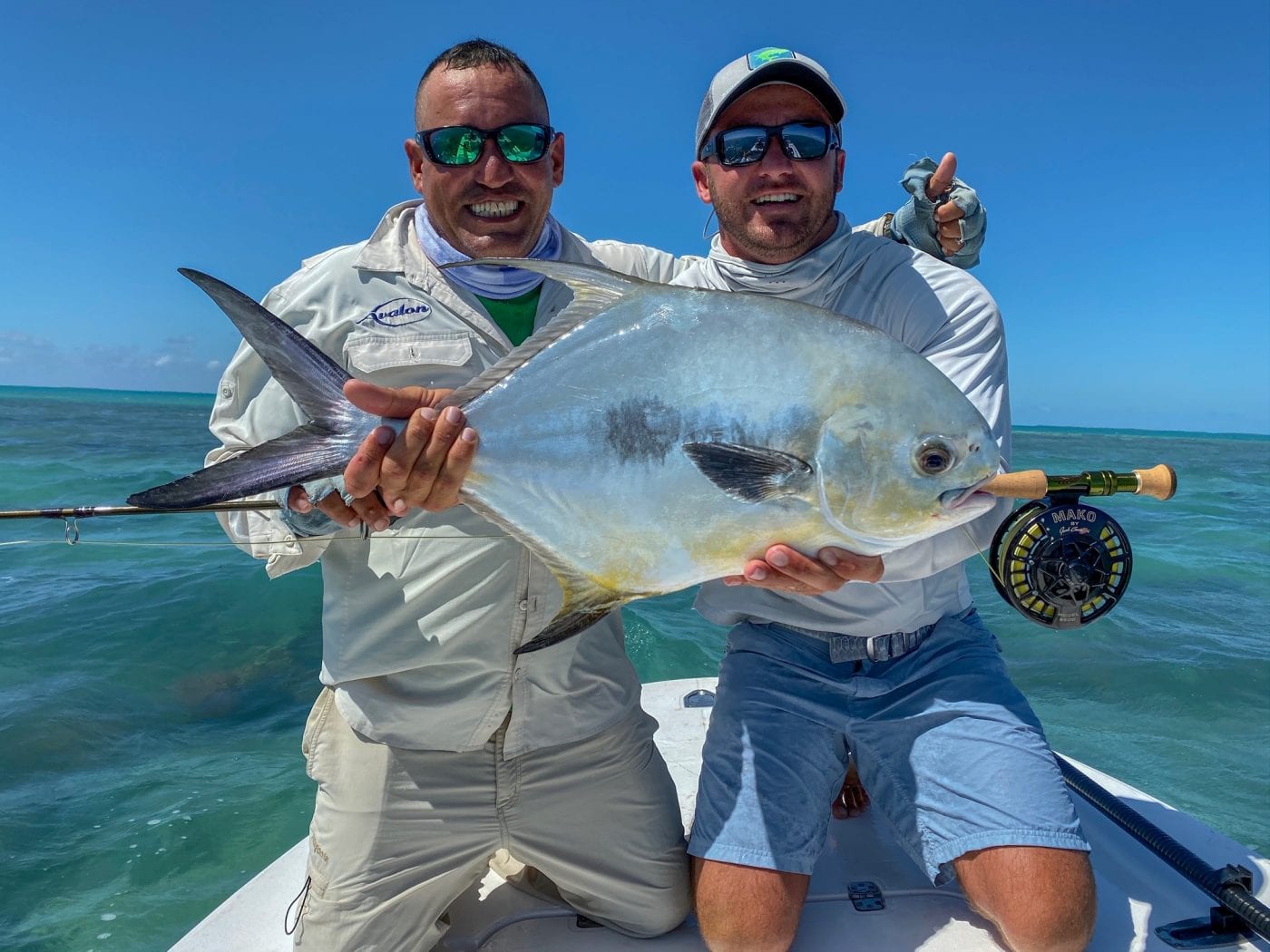 After that I was up, and on our next shot I had an opportunity at a school of tailing fish that worked out swimmingly. Life was good until it wasn’t for us, however, as the fish came unbuttoned after a short run and cost us number two for the day by nothing more than some bad luck.

Brandon generously offered me the bow for a time longer, and after not seeing any at a stop we had a shot at some fish in deeper water. We had to take a few shots at these fish before one complied, and when it did we were rewarded with another excuse to lose a fish; this time, a tangle of line made its way tightly in to the first stripping guide. We let the fish swim against slack while I dealt with the mess, and no sooner had we cleared the obstruction than the fish took off. We landed the fish without further issue, our second for the day: 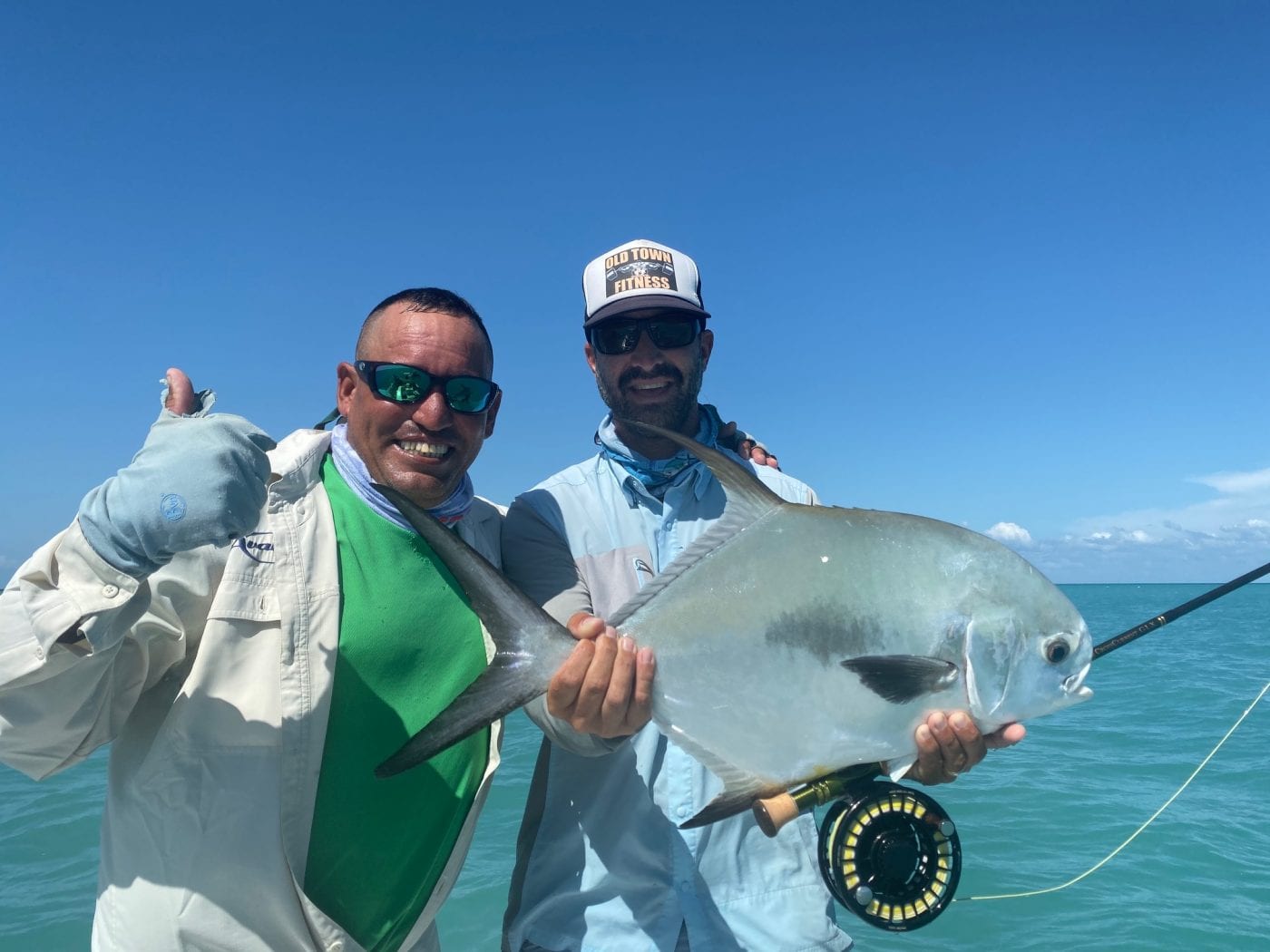 Bemba had us on the bonefish not long after, and it didn’t take us long to get a pair towards our slam. This completed one for me, having caught a tarpon in the morning, and quickly our focus shifted to getting Brandon a tarpon for the final piece of a double grand slam. Finding a tarpon is usually not a hard thing to do, especially in the untouched environment of Jardines de la Reina, though one thing that makes it impossible is almost always wanting it badly. The tarpon were predictably shy for what we needed them for, though after a half hour of trying Brandon was able to catch one to complete our double grand slam. Thanks are due of course to Bemba for making this possible, and I’m lucky to have spent such a great day on the water with Brandon.

More highlights of the trip included a day with Mike, one of the members of the group that I liked a great deal, wherein we caught tarpon all morning until we decided to leave them be. We also did something that I was thrilled by: catching mutton snapper from coral heads in some slightly deeper water. This was one of the things that I’d hoped to get a chance to do while on this trip, and it didn’t disappoint. A number of casts near coral heads and a scarlet flush later I was tight to a nice one, which we photographed before releasing it: 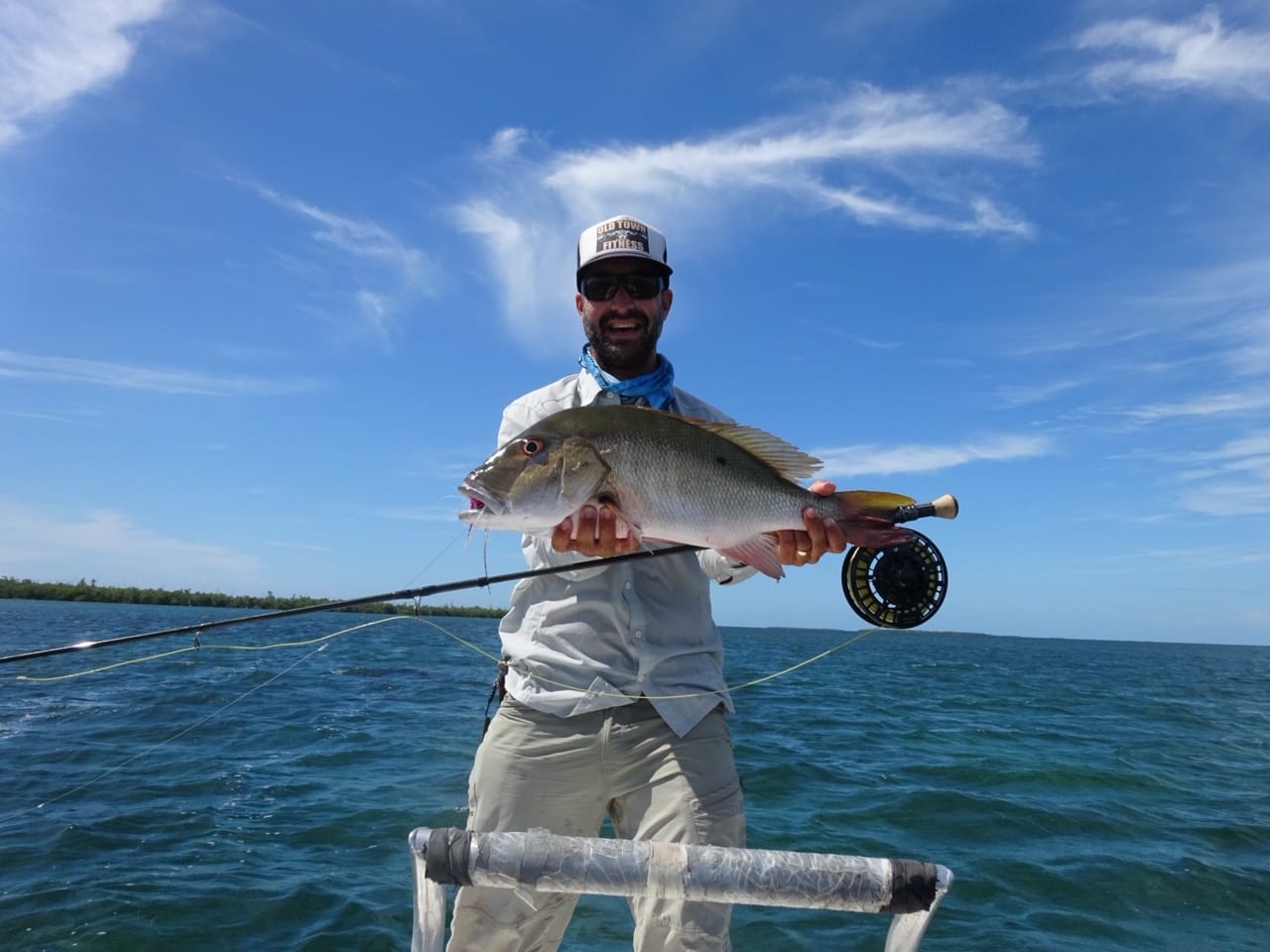 Brandon and I did some evening tailing bonefish fishing, which was spectacular, and I lost another permit later in the week, and in all we had a great time. I’d like to thank Chris and Mark and Mike and Jim for the invite, and give a shout out to Bonefish and Tarpon Trust for letting us in on some of the science they were doing in the area.

A cold front is on the way, which should shake things up, and I had a pair of days fun fishing with Ian after I got back that I’ll get up on these pages shortly. My planned trip with Steve in pursuit of the six has been delayed due to weather and Chad having some minor surgery, so next week I’m sure I’ll get out after some barracuda around here since I’ve got some scheduled time off.