Last week John O’Hearn and I fished the Del Brown. We’ve fished this tournament for the last six years, and after deciding that our time in the permit tournaments was drawing to a close had the actually pretty fun experience of just fishing the event without worrying about how we were doing. Our prefishing day was more of a chance to find places we didn’t want to go than to visit places we did, but we caught a few bonefish and added a number of places to the list of what wasn’t worth returning to.
The fishing was hard, which wasn’t a bad thing. John and I have made a lot of hay over the years in a small amount of sunshine, and that the tournament was going to be a grind made us feel as if we might be able to make a solid final stand.

Day One (first tournament day)
After running longer than usual to where we wanted to fish due to the relocation of the tournament to Sugarloaf Lodge, John and I set out, keeping it light and having fun. After so many years of being tied to the outcome of these tournaments like our lives depended on it, we just went fishing and talked about how much nicer things are now inside our minds than they were when we started in the tournaments. We had a single shot before noon, at a single that was spotted too close to the boat, though once the tide got right John started in toward a place he knew a fish might be around for us to throw at. This plan was derailed by a boat that clearly wanted to be there more than we did, so we left and instead went nearby to a place we hadn’t fished before. It didn’t take long for our relaxed approach to pay off: after 20 minutes we saw a school of smaller fish that let us get a fly into the middle of them. A fish peeled off from the group and tracked the fly, missing it once before finally getting contacted on the second grab. The fish was small but a total pain during the fight, making multiple plays at the motor and under the boat before finally giving up and letting us get the net around it. It was bigger than we thought, though nowhere near huge, and we measured it on the board and turned it loose for another day: 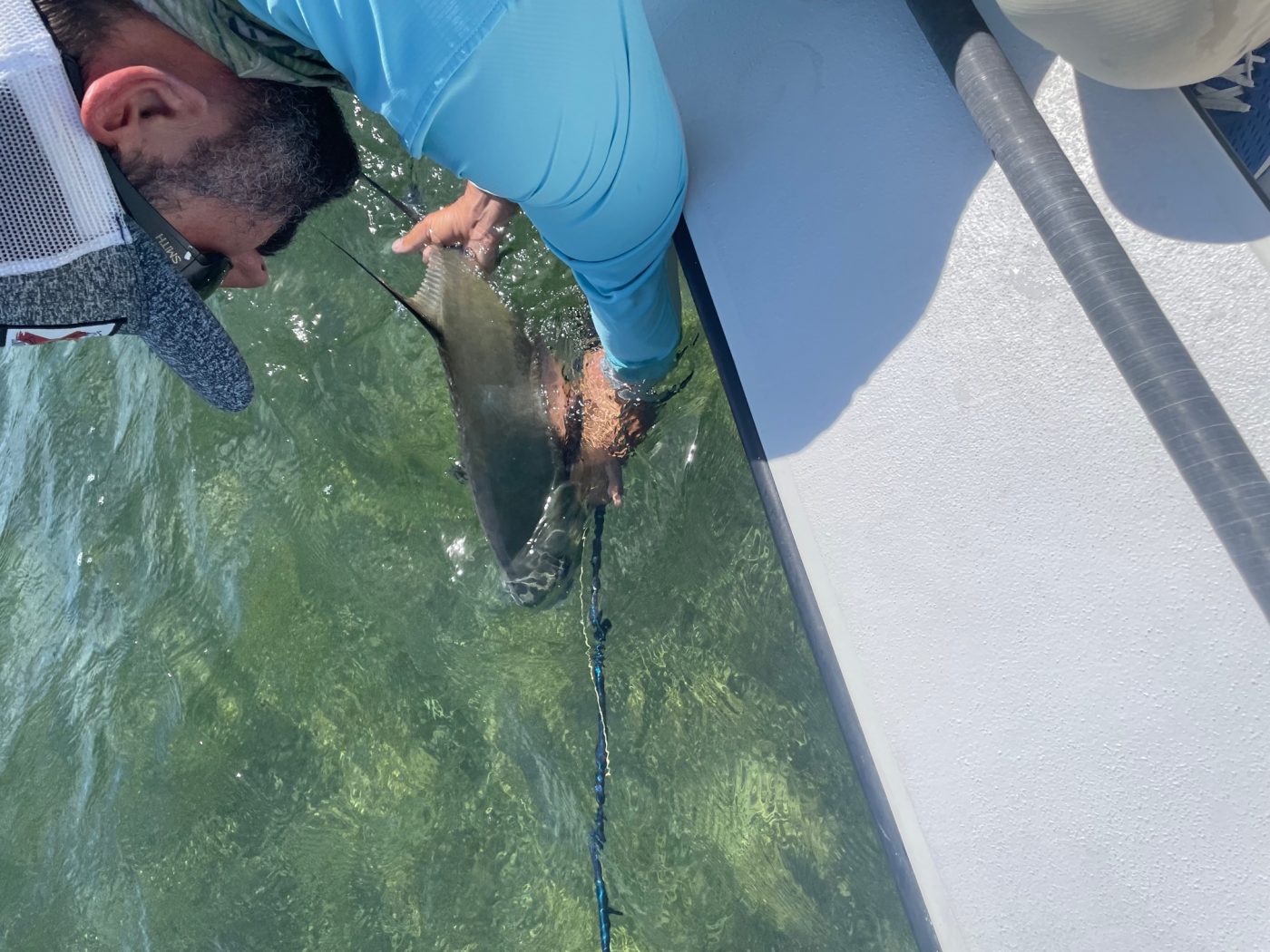 After that we struggled to find anything to throw at until near the end of the day. John found a spot that held a large number of fish to finish us off, and we had multiple chances in some tough glare before the lines out alarm sounded and we were on our way back to check in. There we found that we were in the middle of the pack: Simon Becker and Clint Packo had managed two, and a few boats had managed to catch a single fish as we had. Going in to day two we found ourselves, despite our relaxed attitude, in the hunt.

Day Two (second tournament day)
Our second day of fishing was similar to the first. We struggled to find a shot in the morning save for a school of smaller fish that didn’t show any interest, though this day we were given a great shot at a single fish to keep the late morning moving. It’s hard to say to what degree I screwed it up, though it was sufficient to prevent the outcome we hoped for. The cast was slightly shy of the fish, though I got it there far enough away to make things feel like they could work if I had to try again. Instead of eating the fly the fish slowly followed behind it, tracking it with just enough interest to keep us from re-casting until we ran out of real estate near the boat. I tried to flail another shot at the fish, this one landing closer but predictably not generating enough interest to keep the fish from noticing the boat and swimming away in elevating stages of discontent. I kicked myself for the shot not working, but soon we were back to having fun and bantering between us as the day marched towards lines out. We were fishless for another few hours until the end of the day, when John found a group of fish where we had seen them the day before. Our first cast was looked at but never bitten, though our second got the grab. Given the size of fish in the school we were sure it was huge, though after a short fight we were surprised when it was just regular-sized and not jumbo. We took some pictures and let it go, getting back to fishing and thinking we might be able to get a second one from the group: 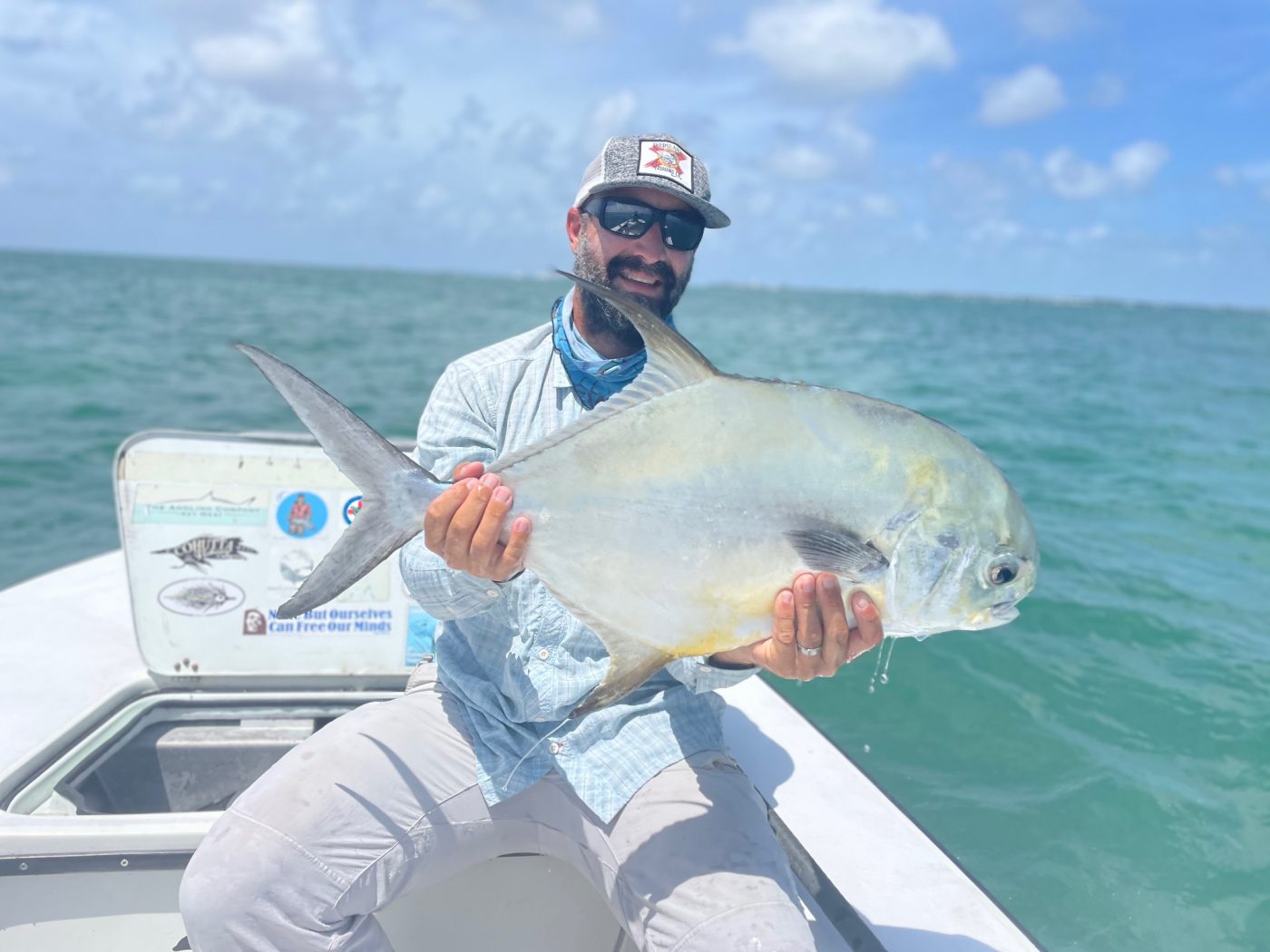 We didn’t get another that day but we did find a final shot just before lines out, not getting a bite before heading back to Sugarloaf lodge to check in. There we found that only a few fish were caught this day, one of them by Simon and Clint, who stood squarely atop the field going into the final day. Once again, John and I found ourselves in great position despite our commitment to not getting pulled too far into the competition.

Day Three (final tournament day)
John and I opted to stick with what had gotten us through the tough fishing of the last two days. We found fish at the first spot we went, getting a few great shots that could have worked but never did. The second and third stops were the same: fish that appeared at first relaxed, casts that appeared capable, fish that suddenly appeared on edge and non-compliant. Our approach never waivered, even by the early afternoon when we were beset totally by permit that we felt had a strange aspect to their behavior. We kept trying, kept making the casts that we knew had a chance to work but never seemed to. By 3:30 we had thrown at a large number of fish without any on the board, and when the alarm went off we had something to eat and headed back, sure that we had given it our all but also sure that it hadn’t been enough to make it over the top. When we got to the dock we found that our tough fishing was also shared by nearly every team on the board except for two: Simon and Clint had caught another pair of fish, making their total five, and Nick Labadie and Wes Smith had caught another fish to give them two. Our fish were of similar size, and though John and I were sure we had been knocked into third we actually ended up in runner-up position for a hilarious fourth time, beating Nick and Wes by a quarter-inch to a second place metal fish. Simon and Clint won the biggest as well as the most, taking home grand champion honors. After their win in the Merkin two years ago, not to mention knowing Simon for a long time and being continually impressed by his fishing abilities, we were nothing but happy for both of the guys standing up holding the perpetual trophy. Both earned it, and both deserve a lot of credit for a tournament where they more than doubled the second place total.

On a personal note, it’s been a fun and amazing journey with John O’Hearn through the years in the permit tournaments. We did what we set out to do, and I couldn’t have asked for any more than that. Next year I’ll be cheering Kat on, plotting my revenge in the tarpon tournaments. We are set to fish the IGFA Permit Invitational in late September, and I’ll make a quick pivot to fish the fall fly with Brandon Cyr, and then Kat and I have a daughter due to arrive in early November which I’m more than excited about.

This month I’ve got some days scheduled, and John and I are throwing 4# tippet exclusively for a few days in August. Depsite the future lack of permit tournaments, I hope to get another tippet record with these fish and the four seems to be next in line.