At the end of last week, I spent a day on the water with Ian Slater. The fishing hadn’t been great for Ian the days leading up to our trip, so we discussed a new plan that involved us going to some places we don’t fish very often. We hoped for a permit, but in case it came down to it we brought a rod for barracuda. A fair number of my recent reports have mentioned how tense we are in anticipation of a cold front to bring us some happy wolfs, and even though we had not yet received said snap we weren’t prepared to go permit fishing in December without a back up plan in place.

We started fishing in the morning in some marginal conditons, though we spooked a large permit from our early shadows to keep our hopes up. An hour of fishing brought better visibility but no fish, and we stuck with the area a little longer in case they started to move. We were distracted for a while by some nearby tarpon that proved disinterested in our fly swinging, but we stuck with it for a while before returning to permit depth. In another 45 minutes we moved elsewhere, pushing a new flat in hopes of finding something to throw at. The same tough fishing in areas more familiar might have led to some focus blur, but in this relatively new place we were able to maintain some measure of ready attention. We crossed a channel to the next flat over, and in a few minutes spotted tear in the otherwise steady surface. Ian called out the location of the fish when I lost it, and shortly we had the fly in a reasonable spot. The fish saw the feathers and swerved over to take a look, and when it turned away a long strip brought it back with lips open for a taste. The fish shuddered onto the fly and we got the hook in before it took off for deeper water, and Ian racked the pole to give chase. The fish was a nice one, and it took a little time to get a hand on the tail. When we did we were elated in the way that permit fishing seldom sanctions as we held up the prize for some glamour shots: 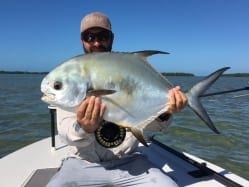 With that our confidence was elevated enough for the rest of the day, and we had more than a few hours to use it to our advantage. A few minutes later in some puffing muds we came tight to a bonefish, which got us close to a theoretical slam. Ian snapped a picture: 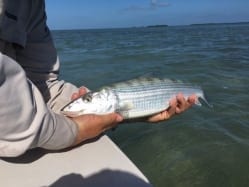 With two fish on as many shots, we were in good spirits and continued on our way. It’s not often that things work out so perfectly, and that we took a run to check something new out on this day made it all the sweeter. We bumped around for another hour or two looking for a second permit but didn’t find any, and when a few barracuda started to slide up on the grass we talked about throwing at them. A slam was a potential, and while the nearby tarpon siren song still rang the nearer battery of water wolves were of more interest to Ian and me. We removed the tarpon fly and attached a special of a new color and went to work. The first cast was followed and eaten, though the fish did not stay attached. The second time the fly was wet it was soon wrapped in grass, though this did nothing to dissuade a large fish of near 40 inches from taking a nibble. The fish ate and we were tight to the third part of what might be called a December slam. We landed the fish and took pictures before continuing on in pursuit of more: 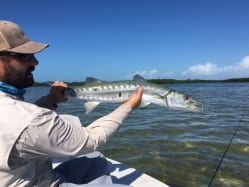 The fishing continued in this area, though we were unable to coax a bite from the fish. Ian moved to another area that he thought might hold some more fish, and it was there that we found some incredible fishing. The barracuda glared at us from far away on a white gouge in the flat, and we were able to prepare for the shots early on. Each cast needed to be long and precise, and a 30-60-90 was requisite in order to force an error. When the pieces came together, the teeth cracked open and we were rewarded with some spectacular bites over white sand. In a an hour and a half we caught another three barracuda, giving us an average of just over 40 inches. When the fishing slowed down we went elsewhere, our minds now on a slam. We returned to the place where the tarpon had been and made a final stand in pursuit of the third piece, but when the tide started to die and the fish were in short supply we headed home.

A day like this comes around seldom, and for Ian and me it was a great encouragement. To fish an area out of our typical circuit and be rewarded with such fishing was a treat, and we stayed amplified until we got home. Thanks are of course due to Ian for putting together such a great day, and we made it out on Tuesday as well to see what of our momentum would carry us through.

As it turned out, we had another amazing day on Tuesday. I’ll get to that report if I can before we leave tomorrow morning for New Zealand.