Before the recent trip to Homestead to fish with Lincoln Rodriguez, David Mangum came into town for a few days of permit fishing with the usual cast of characters. We were only missing Ian Slater this time around, who’s schedule didn’t line up for our days this year.
Before I started fishing, Kat and David went out together with Nick Labadie for a day while I took care of some things at home, and while they had some pretty amazing fishing for bonefish the permit decided to wait a day until they showed up. The following day was our first with John O’Hearn, and John had their number. I was throwing 4#, hoping to connect with a fish over 24 pounds, and David (wisely) was throwing 16 in an attempt to simply have some fun and catch a permit. Within an hour his wisdom had rotated into clear focus: while I had been dealt a painful if hilarious blow by a needle fish that had cost me a good shot at a school of tailing permit and spent many minutes stripping in snappers and rescuing my fly from seagrass on the light tippet, David had found a willing participant in a tailing fish and we motored after it while I got what you get when you throw four pound tippet at permit. We snapped some pictures of David’s fish and continued on with our day: 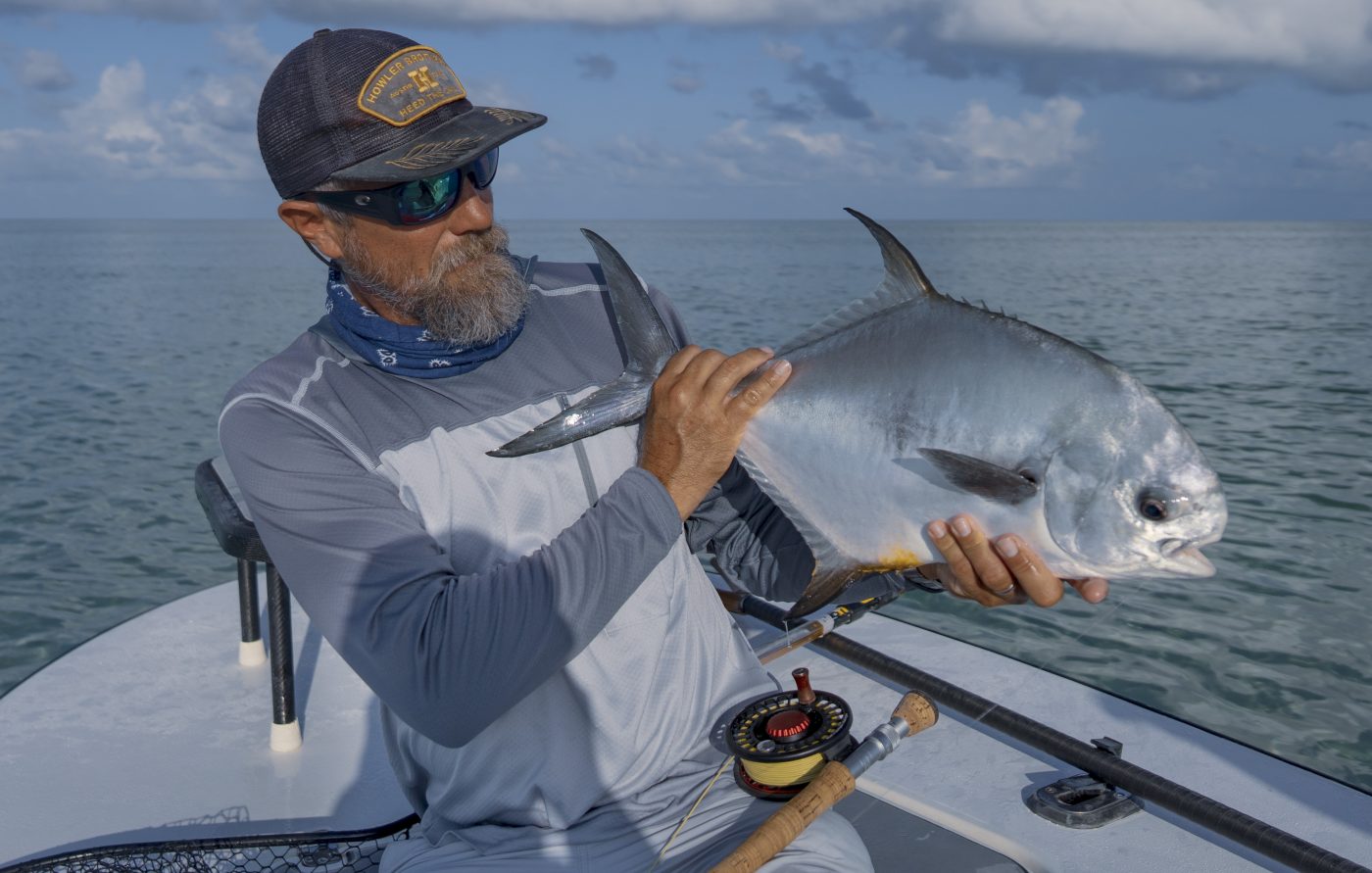 After that I had some more time to spend, but the fish didn’t want to spend any of theirs on me and we left to look elsewhere. Soon we were in another spot and again surrounded by fish, and I got out to wade after a school that seemed destined for where I was waiting to cut them off. This group passed by me, and behind me David got out of the boat and intercepted the passing school. He was tight within minutes, and since I was far away from David and John they set off together as a pair to chase down what was clearly a larger permit than the one he’d started the day with. I stayed put, having dreams of hooking a 25 pound permit and landing all by myself on four pound tippet for a few minutes before I started watching John and David full time. The fish was clearly shaping up to be a worthy adversary, and the first time it made a play for some nearby mangrove roots I watched them slow and weave the skiff, David crouching down to clear the line from under the tangle. They appeared to be clear of the obstruction but the fish made another play to shake them off by diving into the roots a second time, and this time the fish got the better of them and broke off. I could hear some distant expletives, and some muttering, before they came back to collect me. We left after this loss, hoping to get another point in our column.
The next fish we hooked was on four pound, and while not big enough to be a record we were still excited about the prospect of landing one anyway. As soon as I hooked the fish, however, it took for the ‘safety’ of a nearby lemon shark which immediately took interest in the permit. I gave the fish every opportunity to get away, though as the permit sought cover from the shark things started to look bad. Luckily, the shark severed the four pound on its approach, and since the permit still had all its bars it was able to get away. The shark sulked around for a time, hoping to find the easy meal it had missed, but soon it left. We kept on throughout the day, but despite our efforts weren’t able to connect to a fourth permit.
Our next day of fishing brought tougher conditions, and the only fish we could get a hook into was a small fish on four pound that dropped the fly after we chased it for a minute.
The final day of fishing we were with Brandon Cyr, and at our first spot had a chance at a number of fish tailing. I had a chance to throw a few decent casts in their direction that were ignored before Brandon again suggested the fly that had worked for him lately, and as soon as I took some advice we were fighting a permit again. This fish was small and gave us a chance not to start the motor, which we took in hopes of preserving the fishing for David to have a shot as well: 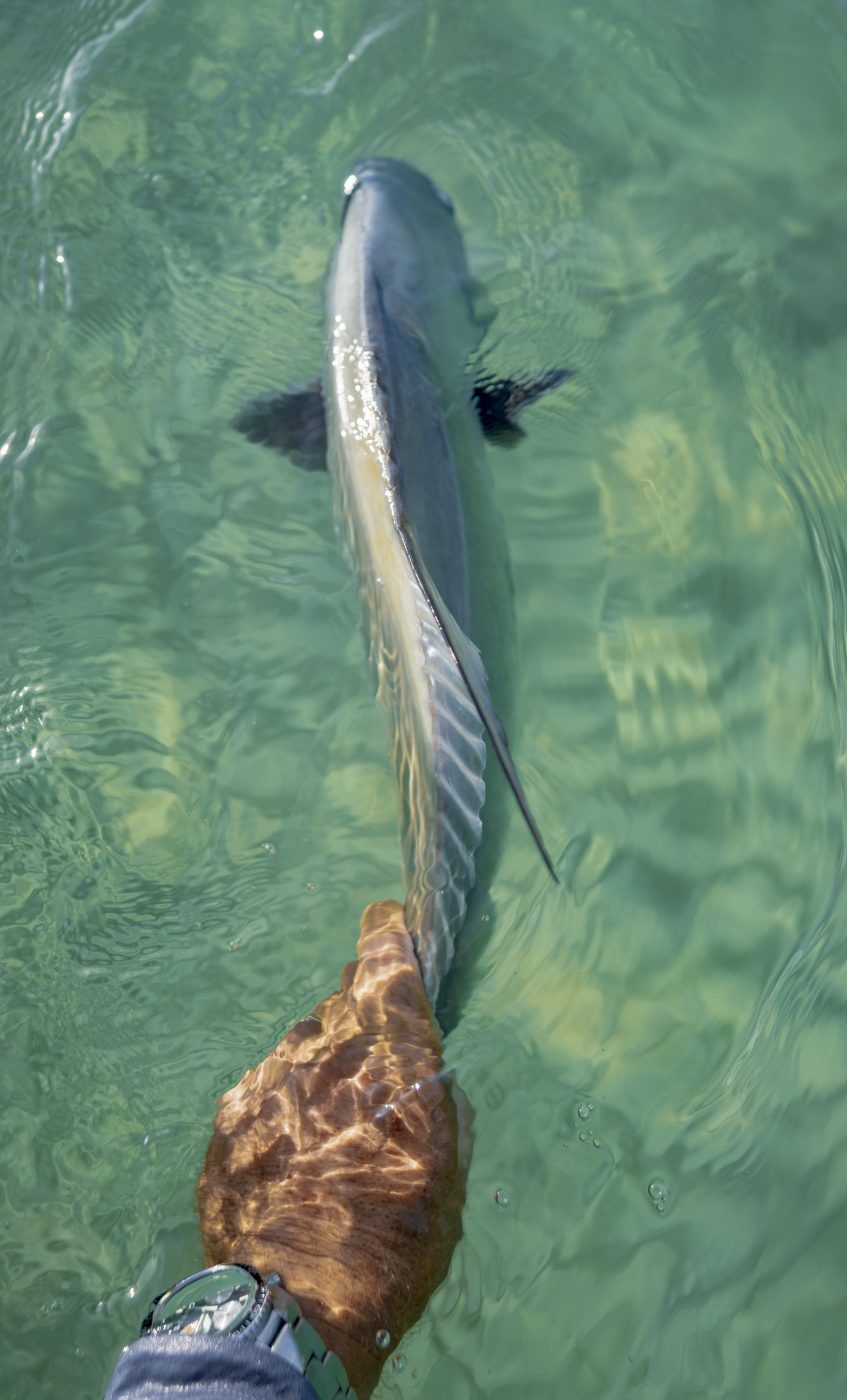 This panned out in a kind-of kind of way, giving us a chance to throw at some fish that were disinterested before we left, and soon we were in new places looking for another fish. For the rest of the day we searched without finding our second, though we had enough shots that I felt as though we could have made one more happen. We finished late, glad for the one we posted early.

I’d like to thank David for making the trip down again this year, and John, Brandon and Nick for making it worthwhile.

The IGFA Permit Invitational starts Wednesday, and as usual a report will follow. I’m looking forward to spending some time with John this week looking for a win in our final tournament for the foreseeable future.