Last week I traveled to the Everglades again, this time with Kat to celebrate her birthday, to fish with Steve Huff. As readership of these pages know, I spent a fair amount of time up there over the years fishing with Steve and a rotating cast of hopeful abettors for the six. In the end it fell to our determination, and since I’ve returned a few times to fish with Steve just for fun.
Our plan this time was to take Kat in search of the ladies 4# tippet snook record, one that we felt might be possible in two days of fishing. For Kat it was also a birthday celebration, and for us together it was a chance to have a few days of fun together before our tiny new roommate moves in sometime in November. We drove up to the Everglades City Motel, and with the exception of some traffic on the stretch had a fun drive north. We checked in to the room, had some dinner and visited with Steve and Patty before getting some sleep before the fishing started.
We started early, making a long run but stopping to fish along the way. We found a few smaller fish, saw some evidence of larger ones, and generally had a blast. Kat had a single bite from a fish that we thought would make the stick, though this one broke off on the hook set before we could start the light tug-of-war we wanted. She caught a decent fish, maybe 4 pounds, that gave us something to talk quickly about if nothing else. We came across a number of larger fish towards the end of the day, feeling that a few were much bigger than we needed, but never connected with one in the low light. We took off when the light got too low, and when we got back to Everglades City we made a dinner at Steve’s house for Kat’s birthday.

The next day we worked our way back near where we’d found the large snook the day before, planning our day with the spot in mind for later. We poled along shorelines throughout the day, catching a few decent snook before we returned to where the giants lived for a final stand.
Kat was up, and the fish were showing up. We all felt like this was the time it might happen, and got the net out in case she connected with one. Again the fish were making it harder than it needed to be, showing themselves too close to the boat for us to have much control leading up to the shot. Kat decided to take a break, and offered me the rod she had rigged for the record instead of the 12# rig I had been using. The men’s record is 15.5 pounds on 4, caught by Andy Novak, and while this is the type of record that would be relatively wild to catch without some serious time spent fishing for it I grabbed the rod and hoped for the best. In a few minutes I saw a giant snook laying on the surface nearby, and got a cast in front of it. Another fish next to it grabbed Steve’s fly instead, and wile this one wasn’t as big as the fish that I’d seen to begin with I was sure it was, at the very least, a very large if not surely record-sized snook. It took a long run toward the shoreline, and just before it made it to the safety of cover it turned out towards us, gassed. The last part of the fight was easy, us just keeping the fish’s head facing away from the mangroves, and within a few minutes Kat netted a solid snook. It wasn’t a record, but still fun: catching any snook is thrilling on four, and that this one was an unplanned catch and well proportioned made it even more fun. Steve and I took a mugshot before Kat got back up: 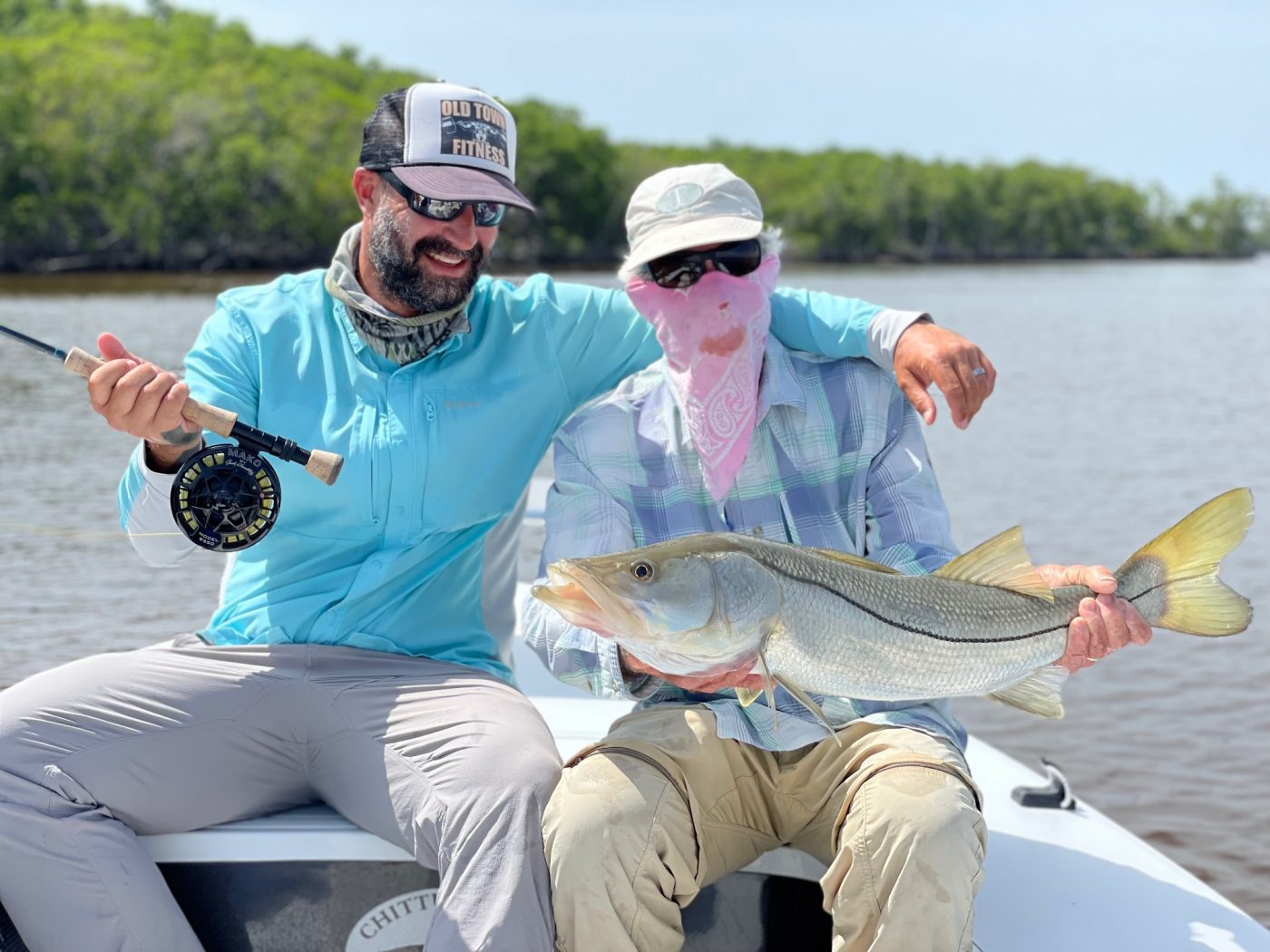 After that we were sure that Kat was going to have her shot at one of the nearby giants for a record, but it wasn’t to be. We tried our best to connect with another fish, but after another hour it was time to move on. With a baby growing inside Kat and a four-hour drive ahead of us, we left a little early to make it home to Key West before midnight and enjoyed a ride back with Steve.

After all Steve (and many others) and I have been through over the years in pursuit of the six pound tarpon record, to simply go and fish for fun with him is turning into one of my new favorite things. I’d like to thank Steve for still making time for me, and I hope we can get up there in the future to fish with him again. One thing is for sure: it won’t take much convincing for me to rig up some four pound for snook again.

I’ve just finished up a few days with David Mangum in our annual permit fishing trip together, fishing down here with the regular cast, and we had a great time as usual. Tomorrow Kat and I are headed up to fish with Lincoln Rodriguez in Biscayne Bay for a few days, still trying to get our skiff time together in before the baby gets here. I’m behind on these reports, but fishing a ton so I don’t mind. I’ll be current soon, stay tuned.