A few weeks ago, during what would have been the 2020 Del Brown Tournament, I fished with John O’Hearn. We were scheduled to fish in the tournament as usual, and without it we were in a position to look at some new places and figure out some new things to do. Our decision to spend some time exploring was one that we were both looking forward to, and while the weather veered towards annoying (and eventually getting named Hanna) we were ready to do what we had both been looking forward to. Adding to the sense of adventure was the fact that even getting a shot in the wind and rain would be a victory, and the possibility of pulling a permit out from this hat was enough to keep our hopes up.
Our first stop was in a place that we’d both fished for barracuda in the past, and we’ve talked over the years about the permit we have seen on occasion on it. We set up and worked our way along the bank, and within a few minutes we saw some tails spiking up from a shove of water. I made a cast up current of the school and John dropped the bow along with the current to prevent a belly from forming, and just when we were about to lose our edge we came tight to a member of the group. The fish acted bigger than it was through the fight, and while we were slightly bothered that it wasn’t over 20 pounds when we landed it we still got our cloudy grip-and-grin: 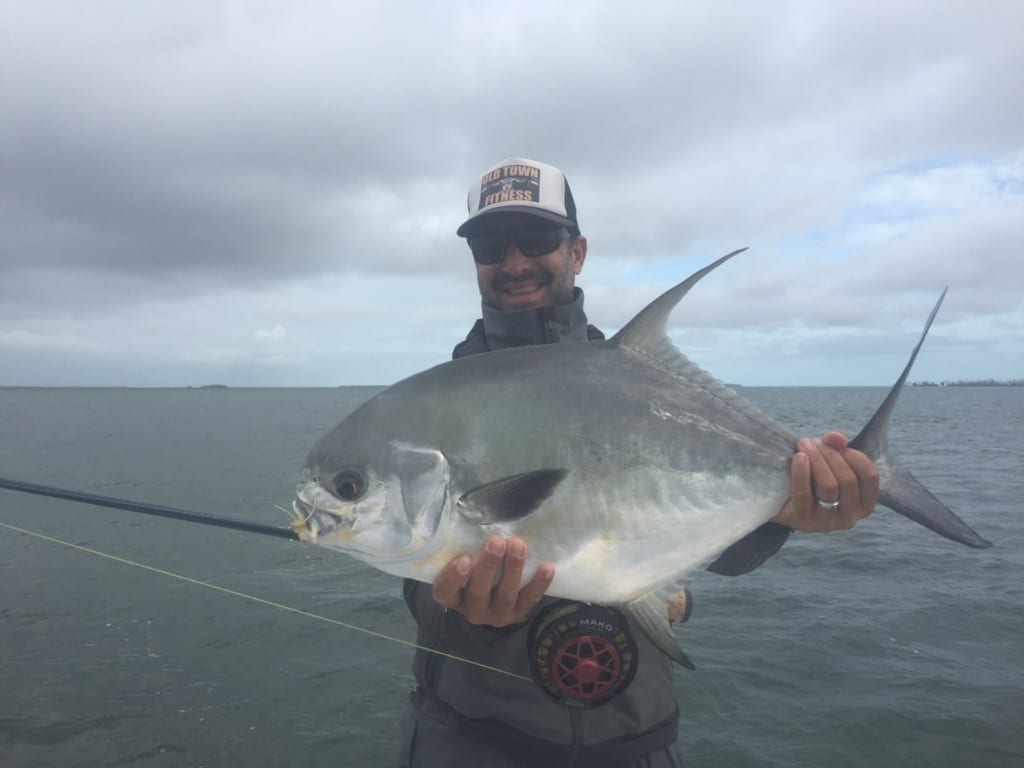 After that the weather continued but we kept on, trying to will our way in to second fish on a tough day. We had a near opportunity with a number of mudding fish in low light, though without sunlight we were left to watch as they blew off the boat before we were in a position to get a cast off. We looked for more new ground and found plenty, though the weather kept us from making another fish happen on a tough day one.

The second day we were joined by my good friend Dave Dalu, with whom I haven’t fished a lot recently. We spent time in the same zip code, and with the scouting we’d done the day before we were confident that we could find some success. The fishing started with a similar program to what had paid so handsomely the day before, though this time there was a smaller number of fish to greet us where we were the day before. I got out on a tailing fish and had a decent shot at it, though in some deeper water I never had a chance to see what happened after I threw the fly. We kept on after this, looking and having fun. The fish kept their distance, sadly, and while we found a few on a place we checked we were always just out of reaching out distance. We had a great time and kept looking until the last, however, and it was a great pleasure to spend a day on the water with Dave as usual.

Our third day of fishing we were joined by Chad huff, and on this day the weather got worse. Despite this John had us in range of a tailing permit at our first spot, and Chad was able to engage the animal. The fish swerved hard after the fly, missing it before it got stuck in the grass, and thereafter it left. I had another shot at a tailing fish that may have been the same one coming back on to the flat, and despite what I thought was a good cast the fish disappeared. Chad got out again at a tail that never reappeared, and when the fishing slowed down we left to look nearby.
There we found a giant single that swam by the boat, and a cast in its direction caused serious interest. I stepped out of the boat as we were blowing away from the fish, trying desperately to retain some control, and once my backcast hit the boat the second time things were clearly finished. We stayed around the area for a few hours, hoping to find another fish to interact with, though soon the weather used a thunderstorm to grip our throat tighter still. We ran from it as best we could, finding an area that, as a testament to John’s abilities as a guide, held fish despite the horrible weather that was trying to choke us out. We frustrated ourselves for another hour, blowing out fish before we could see them. At 3 we decided we’d had enough, running into the wind on the way back to the dock.

As usual I’d like to thanks John for a fantastic pair of days, and especially thank Dave Dalu for coming along. It was great to spend a day on the water with him and I look forward to more in the future. Chad will be down more this summer and fall: the team is getting back together for four pound fishing, looking to beat Del and Steve’s record of 24 pounds set in 1992. The new IGFA permit tournament in October is shaping up to be a good addition to the spring and summer tournaments, and I’ll be fishing it with John.

More to come–I’ve been doing some fishing since the above recently, and it’s been fun and permit filled, if not overflowing.